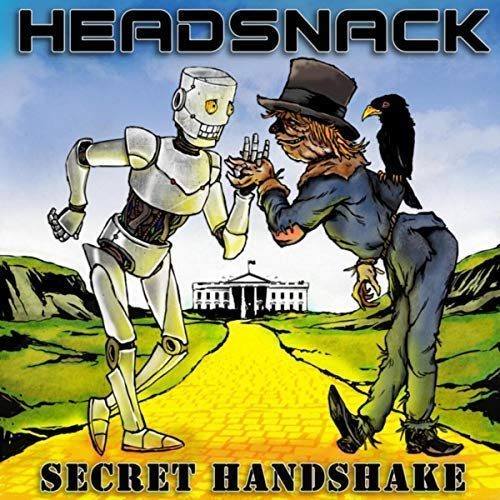 Try and recall the weirdness of Kool Keith. Then recall the aggressiveness of Run the Jewels. Lastly, remember the post-apocalyptic corporate plutocracy of Deltron3030. If you put all of that in a blender together, what comes out is “Secret Handshake” by Headsnack. Formerly known as Phon-X, the former front-man for the NYC underground group Regenerated Headpiece has focused all of his talents (apart from emceeing, he’s also a DJ, producer, and composer) into his solo debut. His sample-based productions here have the added bonus of being fused with live instrumentation on several tracks. Headsnack’s name implies that his aim is to feed your brain. He’s already a complex lyricist with his multi-syllabic internal rhyme schemes and wordplay (though his voice and flow kind of remind me of both Esoteric and Mr. SOS), but he’s got substance in his lyrics, weaving pop culture and current events into his humorous insight which he then furnishes into the listeners’ heads. Promoted as a concept album, “Secret Handshake” adds archetypal imagery to the music to make subtle points about society.

Most of the songs on this album are hip-hop treatises dealing with subjects not regularly discussed in the genre, or not discussed at all. Headsnack handles consumerism, information technology, politics and even food production to varying extents. He seems to have his lyrical sights aimed at technology as several of his songs have it in their focus, such as “Back From Intermission”. Featuring fellow Regenerated Headpiece member Shred Lexicon, both emcees trade rhymes over the live guitar/bass production about how technology that was designed to simplify living has instead enslaved humanity. Humanity is addicted to their personal technology with VERY brief intermissions and Headsnack looks at the implications of that addiction. The theme of technological addiction doesn’t stop with the introductory song, however. Six more songs expand on that idea, like the aptly-titled “Addicted to Phone” and “Antisocial Networking (App Update Reboot)”. The former is just Headsnack with no guests or live music, just him waxing lyrical about the zombie/walking dead nature that phones create over people, a hold which he personally acknowledges that he can’t break for himself. The latter reminds me of “Get Your Log On” by Educated Consumers, in that it’s a facetious look at how social media, particularly Facebook, has replaced meaningful, real-life interactions.

The technology theme takes darker, but insightful turns in a “Black Mirror”-ish way on the next four tracks. “Eye of the Universe” has an old school Kurtis Blow-feel to it, especially with C-Dot’s first verse. The production makes use of guitars and some future synths and there’s a line in the hook which states “In the Eye of the Universe, we’re all the same.” It’s a very ironic statement considering we all do the same thing now…with our phones! It goes further on “Cloud Storage Wars”, a narrative about a dystopian future in which digital has completely replaced the physical, with online storages for everything (all for sale). “Love With a Bot” is a danceable synth-funk track with guitars, and Dramatix’s voice on the hook is distorted to sound like a robot. In it, Headsnack conveys that humans have more of a connection with machines than with each other, as he perceives that the pre-programmed personality artificial intelligence has more authenticity than actual people. The song’s guitar and piano solos near the end of the song are worth repeated listens. “Google Knows (Secret Handshake Mix)” is more of an educational track. Though Plasmic does the hook (she does several on this album) and contains a guitar-driven blues/folk-style production, Headsnack doesn’t really say anything beyond the Google search engine being a tracking tool for the government.

As stated above Headsnack tackles the subject of food production in his lyrics as well. “My Favorite Song (Animal Style Remix)” speaks to the dangers of consuming unclean and genetically modified organisms (like cows). It’s got some bouncy drums and playful bass, but it (as well as the “Oh, oh oh oh oh Oh, oh oh oh oh, oh, oh, oh is how I sing my favorite song” hook) is in stark contrast to the lyrics. Until now, I’ve never heard a rap song about GMOs before. This song ties in with “Kombucha”, a tongue-in-cheek track about mainstream hipster love for Kombucha drinks. “Enjoy the Veal” is also about food, but only in a metaphorical sense. It uses roast veal as a euphemism for what society force-feeds its individuals and screams of revolution as the sole viable solution.

Though Headsnack is a thought-provoking lyricist, this album isn’t without flaws. “Do the Klutz (Epic Putz Remix)” is a song about being clumsy and awkward. It’s actually pretty funny, but I just didn’t like the beat. “Skymall (Remastered)” is about attacking excessive and random consumerism, but its idea was done more creatively on “Cloud Storage Wars”. “Alternative Facts (Deep State Mix)” rounds out the album as the most overtly political track, providing social commentary on immigration, fact distortion, Donald Trump and the gov’t. It also has Shred and Headsnack tag-teaming with the lyrics. “HipHopocratic Oath” closes out the album as an organ-driven ode to hip-hop culture. With “Secret Handshake”, Headsnack proved that even after going solo, he can still come with blistering music and lyrics. In many ways, the title conveys the connection he has with fans of the underground hip-hop sub-culture to which he belongs. Of course, the mainstream masses won’t understand it, but that shouldn’t preclude listeners from giving the album a shot.