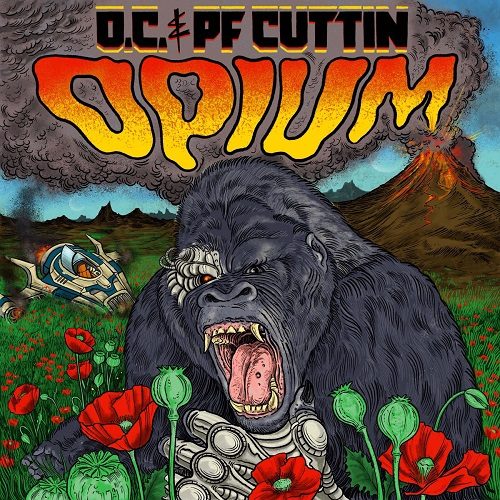 When the East is in the house. Oh my god. Danger. What a couple of samples stringed together in DJ fashion can do. The group may be forgotten, Blahzay Blahzay’s “Danger”, released in 1995, remains a sureshot entry in any ’90s East Coast playlist, an artefact from a time before the rap game began to take on the epic proportions that some twenty years later would inspire the television drama ‘Empire’. The duo of MC Outloud and producer/DJ PF Cuttin didn’t make much noise after that, but the path leading up to their trademark track can be traced with the help of the Discogs database. Outloud released a single called “Clean and Sober” in 1989, which also shouted out PF Cuttin (who used to work with a certain Quick Quintin a couple of years earlier), and together they first appeared as Hostile Takeover in 1992 with the single “Good Cop, Bad Cop” (which also found its way onto their only album “Blah Blah Blah”).

Speaking of danger, from the same era originates another memorable debut single whose MC proposed the following battle royale: “Rappers are in danger / Who will use wits to be a remainder?” A quarter of a century after “Time’s Up” O.C. is still standing, looking back on a good handful of career highlights, not all of them dating back to time immemorial. His partner for the evening has performed with less regularity. PF Cuttin joined the official mixtape circuit during the Tapekingz era and built a small but steadily progressing catalog as a producer for the likes of Sean Price, Masta Killa, Thirstin Howl III and Meyhem Lauren. Now he opts for the same surefire formula – one rapper, one producer – that brought O.C. success with his Apollo Brown collaboration “Trophies” from 2012. The title “Opium” presumably applies the same concept as the O.C./A.G. venture “Oasis”, the ‘O’ representing Omar Credle, the ‘P’ the man born Felix Rovira.

You can tally the 25 minutes quickly as a trip down memory lane with as much boom and bap as you can cram into your backpack, but in actuality there’s a little bit more to it. The most evident piece of nostalgia is “88”, where O takes us back to his formative years in hip-hop, “a time warp between 8-7 and 9-2”, an array of lyrical accessories fueling the memories. PF stands by with a rumbling and tumbling beat and a yearbook worth of vocal samples. Although clocking in at just two minutes, the song is a self-contained statement with an overarching conclusion:

“Nowadays in Harvard they givin’ classes
Peace to all DJ’s and rappers
Peace to all before and after
The blueprint for the young and old, around the globe
Hip-Hop in control and well known
Started in the parks in the BX
Stood the test of time, to this very day you’re seein’ it”

With these “mementos to remind me what I’m cut from”, O.C. examines aspects of his chosen profession on a number of tracks. He drops a bomb early on when he states in “Sit Yourself Down”, “A true MC’s a borderline narcissist / Your ego has to match your rappin'”, and it continues from there with personal, relatable accounts of how he started as a “student of the art”, to ultimately looking back with pride during “Easy Work” – which despite its title doesn’t conceal the actual effort behind such a career. When he brags about the work he’s put in, he’s often got the product to show for it:

“Perfectin’ the craft that I was chose for
A&R’s mirror the parole board
denyin’ me deals
I would try to appeal
Till I met the white guy, that’s when shit got for real”

Apart from the fact that MC Serch deserves better than being the semi-anonymous, almost lawyer-like ‘white guy’ here, these down-to-earth performances show the level of comfort that O.C. finds in rapping professionally after so many years. In “Get in Line” his calling takes on a Biblical note, suitably over sermonizing soul loops. “Moonshine” is both under the influence of booze and the blues, O.C. reliving black traumas of centuries past and trying to come to grips with it as a writer. “Beneath the Planet Apes” takes a similar metaphorical approach in a dystopian setting where the rapper’s message takes on mythological form: “The truth, well, lies beneath skin and bone / It’s a spirit that’s free to roam / hauntin’ like a voice through a speakerphone”. “Higher Learning” in turn deals strictly with living conditions, but here too O.C. aims higher and offers an alternative to making ends meet by any means.

What “Opium” also seems to say is that O.C. has a very concrete concept album in him, a literal one, not a lateral one (such as “Trophies” or “Perestroika”), one that takes place on a slave plantation, on the Planet of the Apes, in 1988, or wherever he could put his lyrical skill to work. PF Cuttin would likely be up to the task as well, as he’s versatile enough to take advantage of hip-hop’s vast possibilities. As it stands, “Opium” holds together nicely with only few potholes in the musical plot (“O.P.M.” with its soul vocals and Y2K synths) and is just meaty enough to not make you think about what could have been if everything would be more fleshed out.