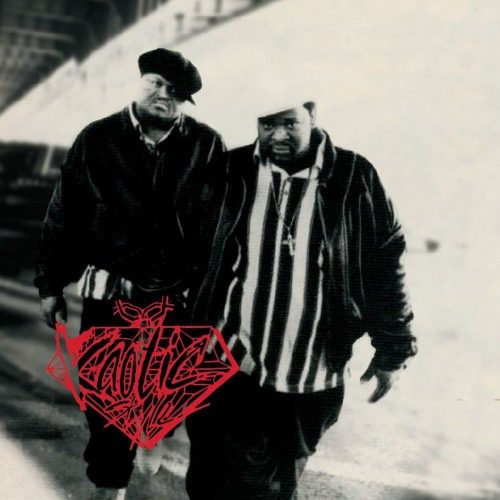 To mine for rough diamonds is the objective of crate diggers, who, thanks to the return of vinyl collectors, have stepped out of the murky bootleg shadows in recent years. Specialized labels reissue tons of indie hip-hop, among them Dope Folks Records, who released Kaotic Style’s “A Diamond in Da Ruff” last year. Another specialty reissuer, Gentleman’s Relief Records, quickly expanded the 10-track LP to a 14-track CD.

Not much is known about Kaotic Style. They were featured with a freestyle on Funkmaster Flex’ seminal retail mixtape “60 Minutes of Funk” and had a single (plus video) on Wreck/Nervous Records, probably their closest shots at some kind of notoriety. Their beginnings are almost easier to make out than the exact time they aborted their mission for good. Before the “A Diamond in Da Ruff” white label promo/demo tape, three twelves were released under the name Kaotic Stylin, 1990’s “Don’t Waste Your Time” rapped by an MC simply referring to himself as X. He was accompanied by producer/manager Beat Scott and DJ Big Grand. The latter, now assisted by a rapper named Genuine, also assumed emceeing duties on their second release, an EP effort with a focus on relationship-related songs. Perhaps as early as 1991/92, but definitely by 1994, Kaotic Style were a rap duo consisting of Big Grand and Scram, and there is good reason to believe that Scram was none other than the aforementioned Beat Scott, who in 1995 also helped out Funkmaster Flex and Big Kap on singles billed to their names.

Industry connections notwithstanding, Kaotic Style presented themselves as strictly East New York, a section of Brooklyn that to the west is flanked by Bushwick, Brownsville and Canarsie. The guests on the album all represent BK, and so does the group with the requisite “Represent”, a forceful tune where everything seems sharpened sonically, including the Jeru staple “Leave your nines at home and bring your skills to the battle”, which is slightly sped up. Both rappers bring a competitive spirit to the track, and while Big Grand establishes himself as the one with more mic time and more refined diction, it’s Scram who relates the most interesting bit of info with “Mama’s young son, came up wise, I’m no fool / From takin’ the jewels to droppin’ the jewels”.

While the initial introduction of “two heavyweight dons” seems to announce typical larger than life personas, all subsequent boasts are either artistic or sexual (the latter limited to one song). Even later tracks that featured guests with more established names were not affected by what Mason Betha once smugly called “a sickness known as Willieism”. In fact, Kaotic Style’s definition of ‘living large’ is surprisingly basic and focuses on girth instead of worth. Where rappers weigh in should have been irrelevant in the era of Heavy D and Fat Joe, but they decide to make it a point anyway.

Maybe they had a vague notion that their selling points were far from unique. “A Diamond in Da Ruff” is devoid of the creative possibilities the early ’90s in particular held. They offer solid “independent funk flavor” with loads of samples (some familiar, some freshly unearthed) and reliably evoke records that actually did make the history books, just not always in an entirely good way. The Kane sample in “Put Your Ear in Da Flava” instantly makes you reminisce over Pete Rock & C.L. Smooth’s “The Main Ingredient” LP, but whether the tune was recorded before or after “Flava in Ya Ear”, it’s light years away from what Easy Moe Bee and Craig Mack cooked up on one of 1994’s defining singles.

“Hip Hop Jazz” tries to make a connection others had long established, but for the sake of formality, Kaotic Style’s fusion of “hip-hop and be bop” is the more rugged kind you would have found on records by the likes of Raw Breed, Double XX or Scientifik. The collection’s (assumed) 1994 tracks carry a few extra pounds compared to the (assumed) 1993 material, which tends to be slightly faster and funkier. Just judging by that distinction, it’s clear that Kaotic Style kept their ears to the streets.

They had no crossover ambitions, not with a song that threatens label reps and declares, “F–k a pop sound” (“Stick Up”). The cosy “Tales From Da Sex Side” is obviously too explicit for airplay. Grand and Scram were concerned with “representin’ true hip-hop” and were sure they were “givin’ the people what they wanna hear, the underground sound” and thus be “stackin’ papes from kickin’ street rap” in no time. “A Diamond in Da Ruff” is very much a plain rap record, lining up local talent to a Buckshot sample in “6 MCs” or building on a previous record (1991’s “Flavor Freestyle”) for the intense “Let a Nigga Flow” (one of several Grand solo cuts).

The demo’s final track, “You Know the Name”, throws a lot of famous names around. Although they compare themselves to everybody from Lords of the Underground to the Geto Boys, they manage to come across as humble students who pay tribute. (Thankfully, Scram forsakes the exaggerated Onyx flow from their ’94 single “Get in Where You Fit In” – not included here.) To get it straight, lyrically the whole thing is blatantly simple. Most of their rhymes are functional, revolving around common rap supplies like freestyling, flowing, microphones, pens and pads, etc. without making good on the promise those terms elicit in hip-hop heads. “So check it as I wreck it” and ‘hit the deck/protect your neck’ rhymes are very standard early ’90s lingo. When a clever phrase is heard (like Grand’s “Blowin’ up, out of proportion”), it seems like a coincident (which it probably is).

Musically, however, the funk-and-flavor themed release hits its mark – horns are everywhere, drums and bass are fully developed and the MC’s are able to temper their aggression, applying the kind of pressure needed to produce diamonds. All in all, Kaotic Style sound exactly like two guys who started as a DJ and a producer.

Even after ’94 and ’95 went by without substantial progress in regard to their career, Kaotic Style stayed true to their down-to-earth philosophy, staying away from gunplay and a lavish lifestyle. 1996’s “Player” samples Biggie and features Big Jaz and a female back-up. Scram suddenly sounds more natural at a slower tempo than his partner, who’s relatively hard to recognize on these later tracks. The same year they did a stint with Nexx Level (briefly home to Smoothe Da Hustler, Trigger Tha Gambler, et al.), recording “What U Want” at D&D Studios, and in 1997 they paid homage to Brooklyn and Audio Two with “Top Billin’ 97” and hooked up with “Reasonable Doubt” alumni Memphis Bleek for “Da Ones”, built around a Public Enemy sample. These being their last tracks together, if nothing else, they could have pursued a career as producers delivering solid East Coast street scores.