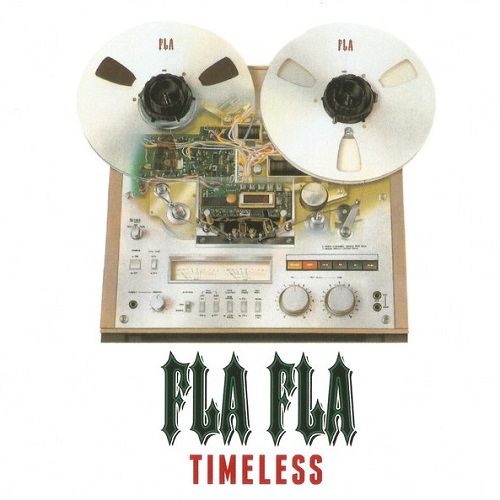 In 2012, following the advice of a friend working at Melbourne’s Wax Museum Records, I picked up a tape single of “Raw Factor 2.0” by Omniscence, produced by Debonair P. Alongside all of its great remixes – I’ve lost track of the official mix due to versions across a tape, a 12” and a 7” – I was excited to find out Debonair P lived in Melbourne, and the label, Gentlemen’s Relief Records was his. Having to spend most of 2020 at home as part of a local lockdown, it seemed like an appropriate time to look at another Gentlemen’s Relief Records release (in collaboration with Baltimore’s SIX2SIX Records); the 2013 “Timeless EP” by Sparrow the Movement’s Fla Fla.

The first track, “I Am Fla” sees Fla Fla introducing himself and declaring war against wack MCs as the “wack rapper flagellator” while putting forward the reminder and threat: “Sparrow’s the name/arrows get aimed at the/marrow of all that you claim”. It’s one of the EP’s highlights with Debonair P’s laid-back beat of synth texture, descending piano notes and clean drum break (persistent high-hat, with nice reverb on the snare) allowing Fla Fla’s lyrics (“styles be cutting edge like a chisel”!) to stand out in the mix. P’s production style is quite different to Fla’s regular collaborator Dre Sparrow, whose beats on Sparrow the Movement’s “Physics” are far busier – but more on that later. Debonair P’s spliced and scratched hook of rhyme samples on “I Am Fla”, features a line neatly flipped into a reference to Fla’s name (via a pronunciation of “fly” sounding like “Fla”): “Keep lacing them with fly shit/my shit, me and my click”.

On the second and title track “Timeless”, Fla’s asserting his “flow is Etta James” over a beat with a slightly increased tempo, booming bass notes, pattering kick and what sounds like a tambourine rattling against a steady high-hat. Production-wise, the drums and bass provide the backbone for a series of reflective, jazzy piano chords placed barely in and out of step with the drums, imitating the off-beat cadences we’d hear from a jazz pianist – it’s subtle, and demonstrates the deceptively understated, technical quality of P’s production. Alongside memorable lines such as the alliterative, “It’s phlegmatic in 12/with my fantastic flabbergasted/antics”, “Timeless” includes one of my favourite lines on the record; the witty, slick reference to being in the pocket and “on the bass like boric acid”. I get tired of hearing the same references over and over again in rhymes, so hearing new, inventive lines on a record is always exciting.

Before 2013’s “Timeless EP” and before the group Fla Fla is most known for, Sparrow the Movement, he was an MC in the early 90s group Runaway Slaves. In 1992, Runaway Slaves released a 12” on Savage Records called “Booty Mission (Yo, Yo, Where the Hoes At?)”, notable for its “Say Ho” mix which swings like early Brand Nubian and Black Sheep – Fla Fla’s style at the time even bearing similarities to Nubian’s Sadat X: “The first two letters of my homonym/freaking up the fiction/step back I play the back”. Runaway Slaves recorded an entire album, but Savage Records folded and the album was never released (GRR, SIX2SIX, Chopped Herring, Dope Folks etc. – anyone got something in the works?). While recording with Runaway Slaves, Fla Fla met Baltimore-born producer Dre Sparrow and their group Sparrow the Movement was formed.

Underground heads lurking on Discogs will be familiar with Sparrow, who in 1998 released the 12” single “Inheritance” on Da Hill Records. Fans who bought the 12” at the time and were taken in by the chopped piano chords and Fla Fla’s religion infused rhymes about destroying wack MCs in God’s name (“Indivisibly and visibly spray/at all the weakness/that your words convey”) would have waited for an album that never came out. Echoing Fla Fla’s experience with Runaway Slaves, following a disagreement about Da Hill’s lack of promotion for their group, Sparrow decided to hold onto their completed album. Jump ahead to 2013 and the “forthcoming” album “Love and Violence” advertised on the 1998 “Inheritance” record label is released on SIX2SIX records as “Physics” (I assume it’s the same record with a different title). “Physics” is incredible – I mean, just check out the dirty and chaotic sound of “Rapper’s Disaster” or the jazzy “On and On” which sounds like a lost track from Pete Rock and CL Smooth’s “All Souled Out” EP. In 2013, a friend played me a few tracks from his copy of “Physics” and I slept on it – regrettably, as it’s now resold for prohibitively expensive prices (anyone got a spare $350 AUD?).

Alongside “I Am Fla”, another highlight on “Timeless” is the unreserved boast-cut, “Swagger”. Over a low-end heavy, filtered melody Da Beatminerz would be proud of, Fla turns into some swagged-out demon who between boasts, says “fuck you too” to himself in a mirror and swears he needs his “ass kicked”. Fla proceeds to let his confidence run rampant with references to shitting on competition (and the world) while “staying on top/like bubbles after shaking a coke”. There’s a bit of a scatological thing going on in the first verse of “Swagger”, but it thankfully avoids the gross qualities of lines like Danny Brown’s “nah literally/shit all on your mixtape” and Tha God Fahim’s “softer than wet baby shit” (not to mention the funny and weird, “Looseys” by Das Efx – a track which sees Dray and Skoob trading verses about shitting themselves).

Sitting behind three remixes on the B-side, “Strugglin” features a nice saxophone melody (could be a synth horn) and spacey synth effects, setting a reflective mood for Fla’s rhymes about the benefits of persevering in the face of adversity and keeping “that grind like back teeth/when you sleep”. While some parts of the track could be interpreted generally, the adversity described is steeped in US history and one which drags from the “chains and whips” of slavery to the system of racially motivated police violence protestors are demanding justice for today (“whatever the cause/we’ve got to take it by force”). Alongside the inspiring call to “get on the offensive” and “see the kingdom of/heaven on this side”, Fla rhymes on the importance of black owned assets – a point recently reiterated on Trinidad James’ “Black Owned” and Pharrell Williams’ “Entrepreneur” featuring Jay Z.

While I missed out on “Physics” in 2013, I managed to pick up “Timeless”. And, while it doesn’t reach the incredible heights of Sparrow the Movement’s 90s material, it demonstrates Fla’s knack for excellent wordplay and similes – not to mention the good work Deb P’s putting out with GRR. The EP is a great, contemporary supplement to Fla Fla’s long career marked by label-woes and held projects; when he rhymes, “until the day I lay 6ft/I’ll stay strugglin”, you’d better believe it.