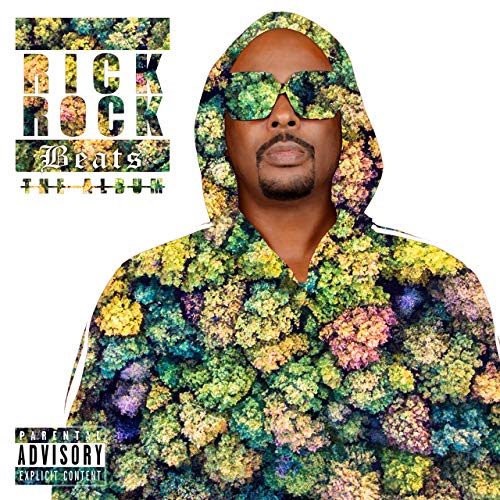 I learned something writing this review. I’ve always associated Rick Rock with Vallejo, CA thanks to all the tracks he’s done for E-40 over the years. That was wrong. Rock actually hails from Montgomery, Alabama and got famous in Fairfield. It’s actually a stone’s throw away from V-A, 23 miles by the map (and probably much longer in traffic). That’s not the end of the story though since his wiki profile doesn’t even mention Suisun City. It’s only a couple miles further out, but it’s an important enough distinction for Rock to use the intro of “Rick Rock Beats” to tell you about his home turf.

The thing that surprised me the most though doing this review is that Rick Rock is RAPPING. The title threw me off because I was expecting a full album of exactly what it promises — Rick Rock’s beats. I envisioned it in my head as a “greatest hits” of all the songs Rick Rock produced for Yay Area rap stars, presented as instrumentals so we could more fully appreciate them. Instead this is a coming out party for Rick Rock as a lyricist, declaring himself the “Northern Cali King of Slappers” or “N.C.K.O.S.” for short.

There aren’t too many other famous rap producers who could get away with this. Diamond D, Large Professor and another Rock named Pete are among the few who come to mind. Despite not being known for his bars he quickly establishes himself as a spitter over his own booming bass and crashing cymbals, adding a nice layer of distortion to his own vocal mix while showing (forgivable) similarity to E-40 in terms of slanguage and flow. He’s even portraying his music as “crossover” in a whole different way than we usually associate with the word: “It’s kind of hard when you’re theorizin with the thugs/Half my niggaz call me cuz, half my niggaz call my blood/Nobody gave me s**t I got my mind up out the mud/I started super slappin got my mind up out the clubs”.

Rock strikes me as a solid enough rapper that he could handle doing ALL the vocals if he wanted to, but since he’s hella connected in the Yay he doesn’t have to hold all the weight himself. Starting with “Still Going Dumb” he starts to slowly introduce his heavy hitters into the mix, though I got briefly distracted from that by a sample similar to X-Clan’s “Grand Verbalizer, What Time Is It?” After I got past that mental synapse firing I got down to appreciating Goldie Gold and Stressmatic on the mic.

From this point forward the album switches back and forth between Rock’s solo tracks and the friends who fin’ to jump in and tear up tracks. Given he’s done some big beats for East coast artists like Jay-Z (“Change the Game”) I wouldn’t have been surprised by a bi-coastal presentation, but this album is hella Cali to the core. He does venture as far South as Long Beach to bring in Snoop Dogg on “Main Phone” and the Slick Rick inspired “Moment I Feared” but so far as I can tell he never leaves the Golden State’s outline.

With songs like “Okay… Reloaded” though he never needs to. It’s not the track on “Rick Rock Beats” I would have chosen to drop as a single or make a music video for, but not because it’s a BAD track. It’s got a dark ominous sound that shows off Rick Rock’s serious chops as a producer and emcee, giving him instant credibility in this latest endeavor, but this is also about as far from a typical Rock slapper as one of his songs can possibly get. As much as I enjoy the horrorcore sound I can’t really picture bumping it in the whip or tearing the roof off to it in a club.

It’s quite frankly the exception compared to the rule for “Rick Rock Beats”. 90% of these songs slap HARD, making them highly listenable music to terrorize residential neighborhoods to. Rock gets “funkier than the Gap Band” on “Check They Temperature”, lets Ishmael the Rebel get some shine on the uplifting “Wake Up”, and pounds the 808 bass hard on the “Rather Be Me” with the surprisingly insightful line “That I’m a real nigga s**t is overrated if you can’t be consistent”.

In some way shape or form Rick Rock defied a majority of my expectations on “Rick Rock Beats” with the most important one being that he was just a producer and not a rapper. It turns out that Rock’s got bars and they’re not bad at all. He’s not going to win awards for the best flow, most charisma or best storytelling, but he exceeds being competent to (dare I say it) come off a bit nice. I’m way past surprised to the point of actually encouraging you to check it out for yourself, particularly if you’ve always enjoyed his booming tracks as much as I do.