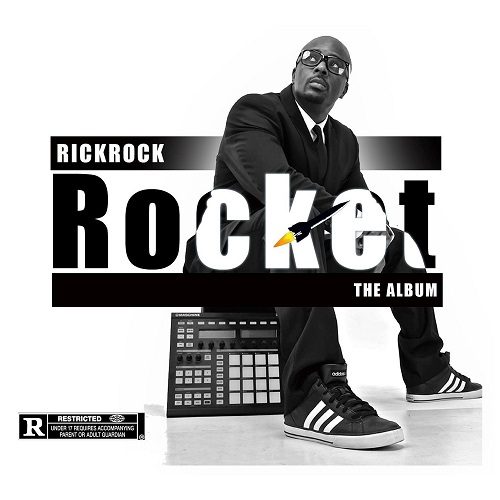 Try as you might, it’s impossible to bring any kind of logical structure into the matrix that has ‘Producer’ on one axis and ‘Rapper’ on the other. There are too many different levels of success, provenance and motives to determine a standard career trajectory for those blessed individuals who have spent time both behind the mixing board and in the vocal booth. Mr. Porter, Dr. Dre, Black Milk, Diddy, El-P, Kev Brown, Kanye West, Warren G, Blueprint, Mannie Fresh, Eligh, Pimp C, The Alchemist and No I.D. all fit the description, but that’s about all their careers have in common.

In the case of Rick Rock most casual observers might not even be aware that he has laid down raps with at least one group (Cosmic Slop Shop) and mentored another (Federation). Evidently Rick Rock’s claim to fame are his beats, the likes of 2Pac, Jay-Z, Snoop Dogg, Busta Rhymes, 50 Cent, E-40, Will Smith and Xzibit (to name but the most famous) all relying on that Rick Rock knock in the past. Rick Rock is one of hip-hop’s star producers, not necessarily sought out for any platinum touch but most certainly for a trademark sound. A sound that originates in Ricardo Thomas’ ability to transfer the freakyness of funk over to the relatively rigid structure of rap music. Following in the footsteps of pioneering mob music producers, he helped take funk-inspired hip-hop to the next level and eventually became one of the musical directors of hyphy, the Bay Area brand of party music that managed to also be a bit of a soundtrack to a lifestyle.

Rick Rock is one of the principal Bay producers and at the same time one of the few who managed to get booked in other regions. On his solo debut, he remains proudly Bay Arean. There was a time when he would refer to the 334 area code (southeastern Alabama) with the same pride, back when Cosmic Slop Shop demanded some respect on behalf of the South. On “Rocket,” Rick Rock mainly claims 707 (northwestern California), essentially pleading a history in Cali hip-hop that dates back to the days of breakdancing and beatboxing. The only conclusion to be drawn here is that he spent enough time in the two places to claim both (hence his business venture going by Southwest Federation Records). But while he may have caught his very first break in the mid-’90s while living with relatives in Montgomery, Alabama (with mandates for Bay Area artists), he now legitimately calls himself the “Northern Cali king of slaps.”

Whenever famous producers moonlight as rappers, you’re tempted to look for motives. The “Rocket Intro” offers a few, not the least being the father sitting his kids down to listen to his story. In this case the story is told with martial effects, the self-described “champion producer” recalling the hyphy movement coming to a stand-still, something he seems to almost take personally, having had a hand in several trademark tunes of that era. Rick Rock depicts the events like a deadly game of musical chairs, where “only one real hip-hopper” remains.

There’s indeed something undeniably hip-hop about doing it all yourself, that’s why we should approach any such project, whether it’s coming from Cory Mo or SpaceGhostPurrp, with due consideration. Having little left to prove, Rick Rock finally gets to be the star of his show, and “The Pimp’s Anthem (I Don’t Do Much)” not only checks a number of boxes of Bay rap, it first and foremost signals Rick Rock’s time to shine. Beginning with leisurely strolling but still menacing bass stabs, he kicks off his campaign with the brand of rap tracks that simmer with energy below the surface. Hell eventually breaks loose with shattering bass quakes, but the best part about it is the half-unfazed, half-eager delivery that barely raises above a whisper, a subtle sample of the theatralic antics that distinguish rap from that corner of the world.

Despite an extended guest list, “Rocket” acts as the most intense Rick Rock experience so far. He’s on every single track, often setting the agenda, whether it’s by preceding Federation member Goldie Gold and recent satisfied customer Redman on the expansive club track “Clean,” or by putting up ‘Beware of Female Hound’ warning signs on “Neva Met,” essentially a funked out bonus to Snoop Dogg’s “Bush” that delegates singing duties to TeeFlii. The theme is further explored in “Me Me Me,” a reaction to being taken advantage of that combines strong language (down to violent imagery) with a sentiment of self-empowerment. Parts of “Rocket” find Rick Rock entrenched in the battle of the sexes, complete with a latent macho attitude that off and on borders on misogynistic. He begins to come around by “Let’s Go,” not merely through the choice of guests (Angel Gold and Ishmael The Rebel) but also by displaying a sensitive side that tries to understand his female antipode. He lets his guard down completely with “Perfect,” where he sings the praise of his perfect match atop a lush soul suite that might as well be scored by Apollo Brown.

Actually “Perfect” might feature input from veteran producer Dr. Fangaz (an early collaborator from Montgomery), but it certainly fits right into the thoughtful/soulful sequence that makes up the middle of the album. The “Rick Rock Beats…” producer tag slipped in by a sultry female voice leaves no doubt about the composer of “Do it All For You,” which hopes to save a relationship by expressing regret over gently snapping percussion and trickling ivories and vocals courtesy of John Legend sibling Vaughn Anthony. Rock also strives for topical variation. On “The Music” he’s joined by L.A. heavyweights Crooked I and Xzibit, reflecting on the role music plays in his life and offering career advice: “Lord knows it’s been a long road fo’ sho / And for every one ‘yes’ expect a thousand ‘no’s / And for every real bro expect a thousand foes.”

While momentarily dipping into soulful and even symphonic textures, Rock invariably returns to the slap. Even average offerings like “I’m That” or “Bay Shit” are decked out in the customized sound design that is still primarily at home in the Bay. As the hook to “Bay Shit” goes: “I know they do it in L.A. – shit / and all across the world – but this some Bay shit.” He gets rhythmically creative on “707 on Mine,” holding his own alongside Vallejo representatives Turf Talk and J-Diggs. He repeates the feat on “Gas Station” next to T-Nutty and Killa Tay, the clearest showcase of the kind of colorful MC’s the Bay is known to breed, Rick riding the bumpy beat with a measured flow:

Another strain of songs delivers social critique paired with uplifting music. Alabama’s Ishmael The Rebel brings a distinct spiritual-political vibe to “I Mean It,” while Rick Rock drops a few lines to America and its law enforcement, notably with all due respect, as he does on “Citizens,” where he addresses the subject in an interesting way – by appealing to the public servant’s honor:

“Mr. Officer, take your hand from ’round his neck, he ain’t did shit
He’s only 18, you fuck around and kill the kid
Let’s have some honor amongst men
I feel like a New York City fireman
Lookin’ at my homeboys’ faces
In the Tower knowin’ that we ain’t gon’ make it”

“Citizens” possesses a bitter undertone with its recurring “They say that we are citizens, we don’t feel like citizens” hook-line but still retains the natural optimism of soul. “Slice” involves Thomas family offspring and makes basic arguments reminiscent of the civil rights movement.

With “Rocket,” Rick Rock makes a consistent personal statement. Some 20 years into his professional career and 10 years after fronting the Federation in the national spotlight, he hasn’t forgotten where he comes from, remembering a time he had to struggle to make ends meet. Musically he unpacks the cocksure grooves but also finds his way along the musical scale. “Rocket” thrives on that genuine Bay Area sense of humor, it has catchy hooks and slapping grooves, references to Slick Rick, Black Sheep, De La Soul and the Beastie Boys, solid to creative rhyming, guests from up and down the West Coast, appearances by Federation members Goldie Gold and Stresmatic, the late Jacka on the final song, E-40 on “I Luv the Bay,” etcetera.

Hyphy may have lived fast and died young, but Rick Rock bounces back with admirable pizzazz. “When you talkin’ ’bout the greats, put my name in the convo,” he demands. Whether you agree or not, “Rocket” ensures his name doesn’t fade into obscurity.