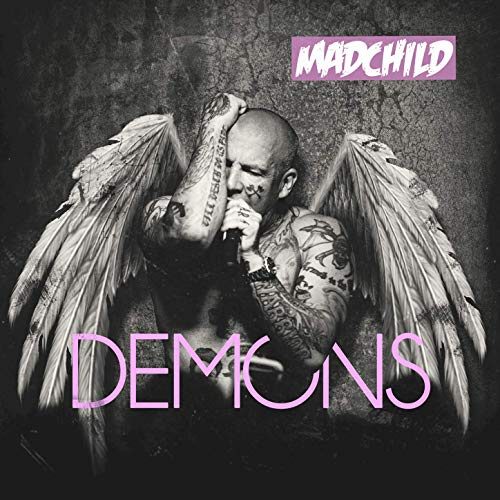 The name Madchild and the label Battle Axe Records are practically synonymous with each other at this point. Personally I can’t picture one without thinking of the other. Even when I think of Swollen Members, the group that initially made him famous, I still picture the Battle Axe logo and hear his nasally bars over the perhaps ironically named crossover hit “Breathe” featuring Nelly Furtado. That’s not to say “nasal” equals “bad” though. B-Real of Cypress Hill has the exact same quality and he’s a certified hip-hop legend. I’m sure both men have also smoked copious amounts of weed over the years, but Louis Freese largely got away with it while Shane Bunting had trouble even crossing the border from Canada into the U.S.

Over the years Madchild’s legal and personal troubles have subsided while his passion for making hip-hop music has continued to grow. As a 43 year old artist on “Demons” he still sounds as venomous toward inferior artists and corporate shills as ever, but he also sounds matured by the long winding road he’s been down — hitting every single bump along the way. The self-titled single and accompanying music video reflects both while working in Bunting’s usual compliment of pop culture references.

“There’s a reason I’m not playin all the festivals
I was popping Xanax sittin ’round like I’m a vegetable
Mixin s**t with alcohol and you get really lit (turn up!)
All I did was watch a lot of movies smokin cigarettes
But now I’ve gotten sick of it, already been down that path
Woken up like ‘S**t man, time has gone by that fast?’
And God’s like ‘Yo, how many chances you ‘gon need bruh?’
So I’m just going to sit and write until my knuckles bleed, bruh”

The most significant line of the song is undoubtedly the closer: “Demons never really leave, all you can do is fight back”. That’s how Madchild lives his life now — one day at a time, one song at a time, one demon at a time. It’s probably too personal for an album review to say I admire him for it but since I’m a year older than him I’m officially too old to give a f**k myself. I found myself at the bottom of a bottle in college more times than I can count, and that’s because I blacked out and couldn’t even remember it to count it. The habit didn’t die when I graduated — loneliness and depression made the s**t worse. Like a true addict once I was in a good relationship I’d find other excuses — I was bored, I had money to burn, et cetera. I never went to AA or a 12-step program, but once I started going to therapy and taking medication for depression, the high of being drunk lost its appeal. I know in the back of my mind though that the demon waits for me to slip.

Perhaps it takes being that kind of f**ked up to relate so well to Madchild’s painful honesty on “Demons”, but if you’ve never been there you can at least take it as a warning never to become an addict to begin with. If that was the sole point of a Madchild album it would be more boring than one of those mandatory DARE lectures they used to make us attend in high school — the kind that actually made you WANT to take drugs just to spite them. Thankfully Madchild always brings the banging beats and funny punchlines even when he’s talking about how messed up he or the world can be. Take “Terror” featuring Sam Neider for example. The piano keys and big beats suck you in, while Madchild walks a tightrope between genius and insanity.

“I’m only human so of course I made a lot of errors/but f**k with me I guarantee I’ll fill your life with… (terror)”. The funny thing is I’m sure that Madchild’s track record and tattoos probably scare a lot of people, including those customs agents who wouldn’t let him into the United States years ago, but listening to him is more mesmerizing than it is terrifying. It’s like a George A. Romero film — it’s visceral and dark, but it’s also a fascinating social commentary when you read between the lines. With Madchild you don’t even have to read between those lines because he’s rapping them for you on songs like “Watergate”.

“B***h, I’m all zipped up, get your faces ripped up
I don’t make love songs, I rap about strip clubs
Labyrinth of statements, savage with the placement
I ain’t into hippie s**t, I’m ravenous with hatred
I’ll pull your card, I’m playin games and I ain’t sympathizin
You say you f****n with kis, you got a synthesizer
I can cut through your bars with a nail file
I’m the devil, I can level you with hellfire”

And since Madchild is one of the most prolific music video creators I can think of, always looking for new ways to pair his gothic visions with macabre visuals, why don’t we take a look at one more with “Death Race”?

It’s the personal connection Madchild makes with his bars on songs like “Times Change” that matters the most to me though. I realize that it’s a para-social relationship and that we’re supposed to feel like we know stars because it benefits them in their careers, but if you acknowledge that relationship you can also recognize how good Madchild has become at cultivating it and applaud him for his skill at it. What makes “Times Change” relevant to that conversation though is that even HE is taking the time to acknowledge that it’s an unequal exchange where you’re going to expect something from him that he probably can’t provide.

“So what I’m saying is I’ve changed, couldn’t stand being the same
but it still seems I rub you the wrong way and you complain
People come in the club asking me questions
If I don’t have right answers that’s the lasting impression
You don’t understand man, that’s a lot of pressure
They walk away hating if I don’t make ’em feel special
Look, you can’t get to know anybody in five minutes in the club
Please don’t tell me that I didn’t show you love
I’m just having a drink, we can talk, it’s no hassle
But if I don’t look excited, then guess who’s the a**hole?”

These days a lot of artists are content to make “albums” that are only 25 minutes long, but Madchild goes double that and then some on “Demons“. From the gentle melodic strum and sung chorus of “No Separation” to the silly-yet-serious feeling relationship woes of “Forget About You” and the ominous haunting backdrop of “Dreaded Force”, Madchild provides more twists and turns than a Stephen King novel or a maze of passages in Zork. There’s still a few people out there who just aren’t going to like Shane Bunting for all the reasons he himself outlines on this album, but “Demons” is probably as close as any of us will come to understanding him, and as someone on the other side of the para-social divide I appreciate what he’s offering us of himself for our enjoyment.