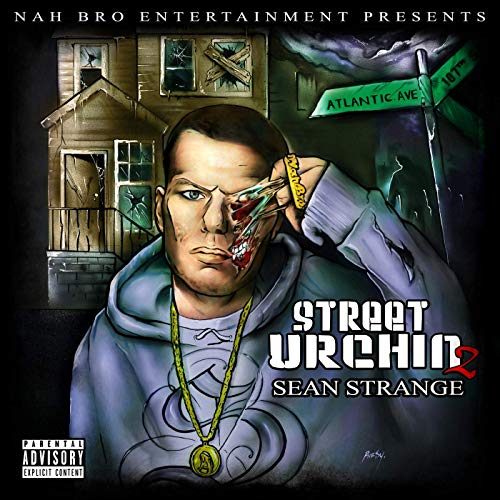 Eight years have gone by and ain’t a damn thing changed. Last time I reviewed Sean Strange’s “Street Urchin” I bemoaned the fact that Strange wasn’t “notable” enough for a Wikipedia entry and even today he still gets no love. Back in the day one of the things that may have stood in Strange’s way was that despite being well known in East coast underground circles his album was released on his own imprint, which in 2011 terms was like putting your album out through Bandcamp or Soundcloud. Now Strange is a little more affiliated — actually a LOT more. He’s an official Def Squadian now and as one might expect with those credentials he’s got a single/video out from “Street Urchin 2” called “Rap Science” with production by Erick Sermon and Rockwilder.

Strange fits well into the Squad label with his grimy Queens flow and punchlines like “you mad nobody know you like a Wu-Tang affiliate”. In case you thought that was a one-off for the Funklord, Sermon also produced “Peppers & Eggs”, giving it the pounding sound and feel of a 1990’s Reggie Noble track. “I’m better than your favorite rapper, bottom line” quips Strange before a sample of the late great Sean Price is scratched for the chorus.

Strange has also worked with the Snowgoons throughout his career so it wasn’t a surprise to see them handle the opener “First Copy Off the Presses”. Strange is perfectly capable of handling his own production though and a large percentage of “Street Urchin 2” features him on BOTH sides of the board. From the throwback track “’95 Live” to the banging unapologetic “F**k You” to the heavy bassline of “The Warning Shot”, Strange proves himself more than capable of designing any style track that he needs. What stands out even more than his beats though are his bars, such as these ill verbals on the latter track:

“I won’t rock with any rapper named after a pill
That ain’t your car, you gotta give it back after you film
You keep my name in your mouth – how pathetic for you
We not alike – why’d you even try connecting the two?”

Strange’s entire point on this song is that “your favorite rapper do the kind of s**t you shouldn’t defend” and that “in the end the world love to watch ratchet activity”. Given what ProJared did last week I think that the line could also read “your favorite YouTuber do the kind of s**t you shouldn’t defend” and that goes for PewDiePie and Logan Paul as well. That’s the dope thing about Sean Strange really — he’s good enough that he could just spit punchlines and be listenable but he’s also trying to drop a few gems here and there. From his harrowing heroin tale “The Devil Is a Drug Addict” to his hardrock anthem “Legends of The Scarface” with Merkules to the guaranteed East coast favorite “Vial Caps” featuring Westside Gunn, Strange works the angles sharp and precise like a Dilated Peoples record. With or without a Wiki entry act like you know — not now but RIGHT NOW.