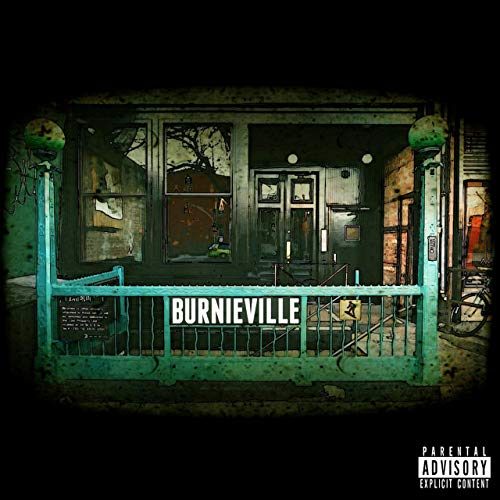 When I think of Fort Greene the first people that come to mind are Talib Kweli, Dana Dane, Erykah Badu and El-P. After releasing a slew of EP’s throughout the last year, K.Burns would like to be the next name on that list. Burns is the entrepreneur and CEO behind his own Team Fame Music Group, which compares him favorably to Kweli’s Javotti Media in terms of retaining control of his mechanical and physical royalties as well as his artistic integrity. To take that next step and grow beyond his regional appeal he linked up with a publicist who sent us the following Burns bio:

“Burnieville is the full-length debut of this young vet/Team Fame Gang captain who first came to national attention when Sway brought him on the Friday Fire Cypher after hearing him on the street. Burnieville boasts production Ecto84, Wavy Da Ghawd, Hobgoblin and Bass Reevez and appearances by Rim (Da Villins) and Eddie Kaine. K burns also released 8 EP’s in 2018 including projects with Vinyl Villain and The Historian.”

Oh so Sway put him on? Let’s check out a performance before we continue.

Aight. That seems like a pretty solid endorsement from Mr. Calloway. The video also tells me that it’s taken Burns a long time to blow as that freestyle session was five years ago. That means at this point in the game “Burnieville” needs to be a fire album to meet the expectations built up by his cyphers and EP’s. That’s the hardest transition for someone known for busting off the top of the dome — just ask Craig G or Supernatural. No matter how hard you are in battle mode, if you can’t deliver memorable bars when given the chance to fill out a full album, people are quick to dismiss you as a flash in the pain. Maybe that’s why Burns waited so long to drop a full album — he didn’t want to rush something out and get s**t on.

The funny thing here is that I’m an old head with a long memory so the first thing I thought of when I heard “New Young G’s” featuring Eddie Kaine was “Young G’s” by Puff Daddy featuring Biggie and Jay-Z. They’re not even trying to hide it one bit. It’s not a spiritual successor to the original, it’s damn near a direct copy. Wavy Da Ghawd samples the exact same Oliver Sain “On the Hill” track as the original, and if you didn’t know it from Sean Combs you’d know it from the D.I.T.C. track “Day One” that came out the same year provoking MANY arguments about who sampled it better. Neither of them even came first though as Pete Rock did it a few years before both of them for the song “Tell Me”. Anyway here’s K.Burns.

I get that K.Burns wanted to pay tribute to a rap song he considers a classic (and he’s not wrong about that) but in terms of originality he’s already shaved off a point on an album that’s only 34 minutes long and 11 tracks deep. Let’s try again with the Ecto84 produced “Dishes”.

Once again two thumbs up for the production — you’re not going to make me mad by flowing to smooth R&B, soul, funk or rock samples. The vocals and the bars aren’t blowing me away though. He falls somewhere between Action Bronson and Max B, which isn’t surprising given his Fort Greene pedigree, but there’s nothing here lyrically that makes me think Sway was right when he said “I was ready to s**t on the dude but he had bars.” What bars? This is just a generic rap about getting sex and selling drugs.

“Headed out to Vegas and what happened we don’t say s**t
If it ain’t the MGM, we be f**kin at the Mandalay
Called room service, little breakfast in the bed
I’m gon’ return her the favor, so I wake her up to head
Hit it in the worst way, when I get between them legs
she be drip, drip, drippin, got her soakin up her bed cause
cause, she love the way a nigga get it
Cook up on the stove, I be water whippin
Pyrex with division, pass the pot or skillet
I break up on the plate, and she wash the dishes”

Just so nobody gets the wrong idea let me be explicitly clear about my point — there’s nothing BAD about the track save for the fact there’s nothing NEW about it. Sounding like a long lost member of the DipSet will undoubtedly garner you fans, and it’s clear that K.Burns has got a few, but if you’re getting that stamp of approval from a tastemaker like Sway I expect more than something I’ve already heard before. “National Stoner Anthem” fails in all those respects. It’s the 2019 version of “We Get High”, no lie, and once again phones in the production by having Wavy sample Regina Belle’s “Baby Come to Me”. It’s not the MOST oversampled song in hip-hop but there are at least 17 examples and for me Kris Kross’ “Live and Die for Hip Hop” was definitive — especially coming at a time in their career when most people had already written them off.

To make a long story short (or as they say these days TL/DR) it’s not that K.Burns is a terrible artist, just a very generic one. Martha Davis once said that the worst thing about the success of The Motels in the 1980’s was that their music had become very “M.O.R.” — short for “Middle Of (the) Road”. That’s K.Burns. To his credit he’s rapping, not singing. To his credit his voice isn’t unpleasant or annoying. To his credit the samples are just fine — there’s just nothing unique about the entire presentation. He’s “furniture music” as Satie would say – perfect to play in the background while you read a book or host a party but nothing that stands out or begs your attention in any way.