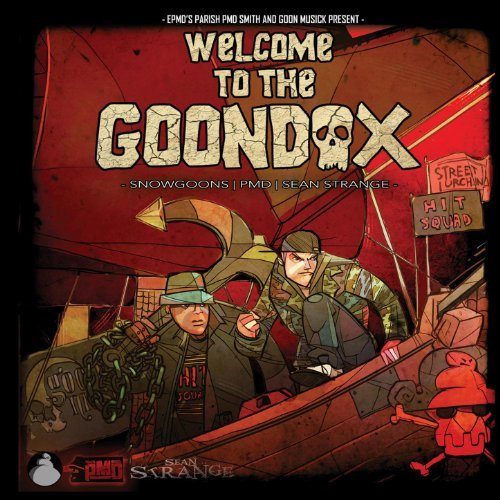 Upon EPMD’s 1992 dissolution, M.D.s E and P assumed new identities – Erick Sermon the funky and Parrish “PMD” Smith the rugged – personae reflected by their new partners-in-crime, the former flanking himself with Redman and Keith Murray and the latter tapping a suddenly gritty Das EFX and a realigned Hit Squad. While the Green Eyed Bandit would find greater success as both a producer and a solo act, PMD authored a rock-solid solo discography even after EPMD went “Back in Business” in 1997, highlighted by 1996’s “Business Is Business,” one of New York’s most overlooked gems of the mid-90s. PMD’s always been happy to lend his considerable presence to collaborations, such as 2002’s similarly underrated “Underground Connection” with DJ Honda, and he turned more than a few heads with the announcement of a new union with Queens rapper Sean Strange and German production duo Snowgoons.

What the resulting full-length “Welcome to the Goondox” may lack in concepts and novelty it attempts to make up in craftsmanship – these guys are old pros. Snowgoons hardly compromise their established sound, letting PMD adapt to a generally more orchestral blueprint than his usual gully East Coast environs, but it’s a welcome adjustment. The kickoff title track is a furious triumph, finding Strange and PMD trading bars in unorthodox rhyme schemes over a dramatic arrangement. “New Box” and “Bang Out (Remix)” succeed via the same formula, and the cinematic aura of Snowgoons’ production carries “Forever (Til the Death),” the marathon posse cut “Raps of the Titans,” and the heavyweight closer “Y’all Invited.” Musically it’s a relatively straightforward affair – Snowgoons fail to exhibit the range displayed on their 2011 M.O.P. tryst “Sparta,” but their tracks are suited for both rapping parties, no small feat given the apparent chasm between their styles.

Sean Strange is a white hardcore rapper, and like many of his collaborators he’s the product of a fragmented underground scene in which the need for a distinct identity inspires one-dimensional characters. With a delivery best described a hiss, his is an abrasive style probably best enjoyed by fans of the extended A.O.T.P. family. Even if the listener finds he isn’t his cup of tea, however, it’s nice to hear both he and Parrish leave well-treaded territory, if only a little, for the sake of collaboration. Both the ruminative “Weather the Storm” and running narrative of “The Chase” are the types of tracks you’d hardly find on either of their solo records, and the likable old school vibes of “Code Red” are improved further by Strange’s boundless energy.

“Welcome to the Goondox” suffers in a few tangible areas. From a lyrical perspective, PMD’s hardly progressed beyond his stone-faced raps of the mid-90s, and while there’s something to be said for the consistency of his trademark slow flow and fisherman hat, he’s still recycling hooks and lines from “Business Is Business” across “Welcome to the Goondox.” When Snowgoons fail to produce a show-stopper the outfit tends to lapse into redundancy, reheating real hip hop-isms and postures such as on the lethargic “All Around the World.” While Strange would normally be more at home on a Snowgoons production than PMD, the Germans slow it down at times for the old-timer which lends an air of compromise to some of the tracklist.

“Welcome to the Goondox” is a collaboration the likes of which I’d like to see much more – young forerunners paying respect and coaxing new life out of a seasoned legend. Yet as compelling as an alliance between such disparate artists as PMD, Sean Strange, and Snowgoons is, it somehow manages to be somewhat predictable – no one ever truly strays beyond the boundaries of his comfort zone. For its faults, though, “Welcome to the Goondox” has much more going for it than your average A.O.T.P. outing, and fans of hardcore East Coast rap and Hit Squad-era boom bap alike should find something to like.