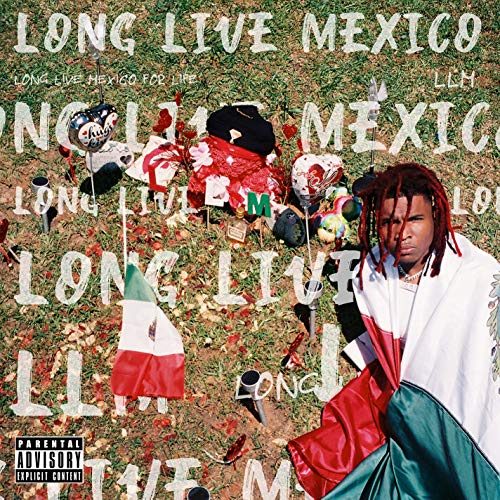 In these turbulent political times it would be easy to believe Raqhid Render b/k/a Lil Keed conceived the title of “Long Live Mexico” as a middle finger to the Trump administration. If you want to entertain that idea in your head after this review that’s fine but the truth is he chose the title to honor a deceased friend whose nickname WAS Mexico. I’m sure the backstory about how he got that name and why he meant so much to Keed would be fascinating, but other than honoring his friend with the title of his first retail release we really don’t know anything else.

Truth be told we don’t know that much about Keed PERIOD. He burst on the scene in 2018 and it’s now 2019, so his ascent to being a signed YSL/300 Entertainment artist has been fast as FUCK. Keed may be a beneficiary of “right place, right time” since he hails from the same part of Atlanta as Young Thug. It should come as no surprise then that he got a co-sign from Mr. Williams on Goose produced single “Proud of Me”.

Clearly they enjoy working together as they also recorded a duet called “Million Dollar Mansions” to a Pi’erre Bourne track.

Guest features are a BIG part of Keed’s commercial breakthrough. I count at least a dozen different names spread through the 20 tracks, many of whom I know largely from mixtapes like Keed’s — Moneybagg Yo, Lil Gotit and Roddy Ricch to name a few. While the Young Thugga is probably the biggest and most recognizable featured artist on “Long Live Mexico” there are at least a few you’d be familiar with even if you aren’t cruising DatPiff for free albums. Example: Lil Uzi Vert and YMW Melly feature on the album’s third and most recent single “Pull Up” produced by JetsonMade.

Now let’s say you didn’t click play on any of the above clips and have never heard Lil Keed before this review. How best should I describe him? Think of Post Malone and Swae Lee’s smash hit “Sunflower” and that’s a good start. He’s got a higher octave vocal range, one that seems well suited to the same kind of AutoTuned modulated singing on tracks, and that’s exactly what he does for approximately an hour. As “On Everything” by Rok illustrates, it’s not really about what Lil Keed says but the style/swag he delivers it with.

“Rollin these backwoods, we smokin it up
Yeah, I got caught but I’m still gon’ lie
Nigga, I’m drippin, you talk bout you fly
You talkin the GOAT talk, I’m callin ’em out
Boy, I go too hard, I put it on everything
Aint no catchin me down bad, I’m bustin everything
Girl pop this Percocet and come out your clothes, yeah yeah
Fuck leprechauns, I’m bangin green
and I got gold… rings”

This brings me back to the opening paragraph, where I dispelled the motion that “Long Live Mexico” was some kind of political statement. Truthfully it’s not ANY kind of statement. That’s not to say there isn’t a charm to Keed’s delivery and solid production from the likes of Metro Boomin, Earl on the Beat, and Senior Slice to name a few (play “Child” with the windows down or the bass may fracture the glass). I wanted to offer Keed some props for being the new young (21) artist on the scene taking the already familiar sound of Fetty Wap, Migos and Future and doing something new with it. Sadly I can not do that. Being that he IS so young and only recently burst onto the scene, I’m willing to give Keed some time to improve. I think more of Future than I did when he first came out and will concede that given time Lil Keed may have similar artistic growth. For now he can ride off his quick ascent to fame, his solid list of connections, and a pleasant delivery that makes him ideal background music if you don’t care what’s being said.