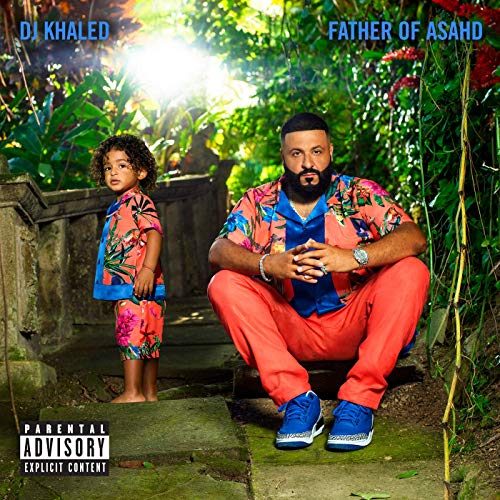 Before I say anything else, I dig DJ Khaled calling his latest album “Father of Asahd”. There are a lot of important things one can do in their lifetime, a lot of awards that can be won, a lot of achievements one can aspire to reach, but there is no greater responsibility than raising your children and no greater reward in life. I have not been so blessed myself but I can’t envy those who are — I can only congratulate Khaled on the blessings that have been rained upon him. It’s only one of many in his storied career but as I said it’s the most important one, and naming his new album this way shows that he thinks so too.

“Wish Wish” is the kind of song Khaled will probably not want Asahd listening to until he’s at least a teenager. Cardi B has never impressed me which puts me in the minority among today’s music listeners, but I don’t apologize for my stance and her lyrics here give me no reason to. “Put a ribbon on my box, cause this p***y’s gifted”. It’s not even that her bars are crass. It’s not like I haven’t heard as much or more for 35 years covering the gamut from 2 Live Crew to Too $hort — it’s just entirely unconvincing to imagine her talking this way outside a rap song even knowing she’s a former stripper. Movies and video games are meant to be immersive and make you feel drawn into a world of fiction to the point you stop thinking about it being fake. Cardi B’s stilted delivery and tryhard sexually frank lyrics do the exact opposite – it breaks the immersion and makes me think she’s phonier than a three dollar bill. Regardless don’t play this song around your children unless you want to explain some uncomfortable metaphors.

“I’m sorry Ms. Jackson, HOOOOO, I am for real”. Oh wait, this is We The Best Music, not OutKast’s fourth album. I suppose it’s been long enough since that classic dropped that DJ Khaled can jack the same sample and either (A.) people won’t remember or (B.) assume he’s paying tribute if they do. I feel like I should be mad at just how blatant “Just Us” is, but when Khaled quips “This how an angel sounds” describing SZA, I can’t help but agree with him. Outside of Rihanna she’s probably my favorite singer these days so if there’s anybody I want to vocalize over this instrumental it’s her. It would still be appropriate to do a remix with Andre and Big Boi though.

DJ Khaled’s got the kind of pull that can tow Boeing Max jets, so it’s not surprising that he can get Shawn Carter, Beyonce and Future together on “Top Off”, which opens with Jay shouting “free my nigga Meek Mill”. That may date when he recorded his verse for the track given Mill got parole pending appeal last April but it’s all good considering it probably took a whole year to put together this album. That towing capacity hauled in a laundry list of stars including (but not limited to) the aforementioned Mill, Lil Wayne, Travis Scott, Post Malone, Jeezy, Rick Ross, Justin Bieber, Quavo and the late Nipsey Hussle on “Higher”.

The song’s hook and gospel choir feel unintentionally painful given Nipsey’s demise. It can’t be helped. One could argue releasing the album with the song as is a month after he passed away was in bad taste, but as noted it probably took a whole year to put together all of these cameos and tracks. It’s an unfortunate coincidence on one hand, but also arguably a fitting tribute to Nipsey to be on such an angelic track. If there’s one thing Khaled has been known for over the years it’s good timing and good breaks. He was the right man in the right place as the 305 rose back to national prominence off the strength of Trina, Trick Daddy and Rick Ross. He’s parlayed and connected better than just about anybody in that position ever could have. And here we are now on “Father of Asahd”, his ELEVENTH studio album. Lifetime achievement award? Yeah it still doesn’t beat being a father to your child, but you got it bruh, congratulations.