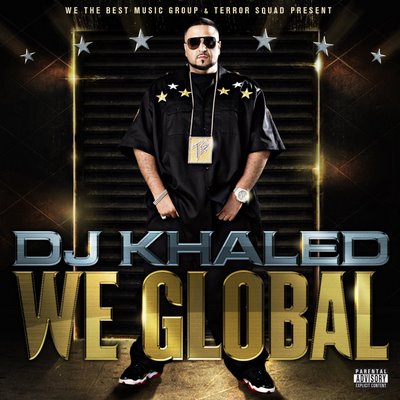 Hate him or love him, DJ Khaled can’t be stopped. He’s released two successful albums and gone straight to the top. There’s a method to Khaled’s musical malstrÃ¸m, sweeping the top of the charts aside with powerful hits and sucking all haters to a watery grave. The lead single off each Khaled album creates tsunami sized radio waves, flooding every ear in sight, effortessly pounding away with a superstar guest roster and infectious beat. 2008’s “Out Here Grindin'” is no exception – in fact it may be the biggest song to crash the mainstream yet. Rick Ross, Akon, Plies, Trick Daddy, Lil Boosie and Ace Hood don’t just swamp the comp, they do so with a relentlessly Southern (and particularly Floridian) sound:

Trick Daddy: “You niggaz fly, before you was just maggots
I’m the shit bitch, because I’m black flaggin
Yes sir, the DR the new sqaud
You niggaz mod and squad, we go hard
They like oh God, there go T-Double
He got his click and his brothers, I know it’s gon’ be trouble
Dark boys on the black Jags, see in them black masks
Now they can’t stand my black ass”

Ace Hood: “Hey knock knock! Yeah I’m knockin on the bank do’
Three hundred million dollars and I’m droppin off the cash flow
See ye ain’t heard I hit a lick, now my money right
Spend it on the U-Haul, dippin on the turnpike
Call up my dogs (dogs) brag on my face (face)
Bodies gon’ fall (fall) tell em it’s Ace (Ace)
If I catch a charge nigga I’ma flee the state
Hit my niggaz L.A. Reid and Khaled watch me beat the case”

One of the biggest Khaled singles yet though may be the one with the smallest list of stars. Only Kanye West and T-Pain appear on “Go Hard,” but in truth no one else is needed. The Runners lay the backdrop, a collection of gunshot fired drums and epic layered melodies that inspire the tandem to create what is for all intents and purposes a sequel to “Good Life.” This time Kanyeezie can’t resist trying to sing a little with the AutoTune himself:

“Felt like I’m comin to get my all
Felt like I had to play the fly on the wall
Felt like niggas was stuntin on me
Funny how I’m flyer than them all
Now I’m at the top ain’t nowhere to go now
Instead of me she gon go down
Maybe I would have slowed down if I knew what I know now
I’m stupid you know I’m dumb
This could fuckin get old while it’s good I’m young
But my heart get cold as the hood I’m from
Tell me what it take to be number one!
I guess it’s gon be what it’s gon’ be
But here’s one thing y’all got to hear
I’m a tell you like George Bush told me
Fuck y’all niggas I’m out of here”

There’s little doubt that out of 13 songs on “We Global” there are easily half that have mega crossover potential. The Cool & Dre laced “I’m On” featuring Nas seems like a lost track from “Untitled” where the Queensbridge representative spits a faster flow and even pays a little homage to the God Rakim lyrically. In the title track to “We Global” Khaled eschews screaming all over the opening and defers to Ray J, Trey Songz and Fat Joe to say how rich and successful they are. “She’s Fine” is the kind of track that’s going to tear up clubs with Sean Paul, Missy Elliott and Busta Rhymes on the verses while Danja provides a hypnotic backdrop to make you whine up. The ridiculously obese “Final Warning” has too many stars to name but Bun B, Lil Scrappy and Ace Hood are just a few of the many. Speaking of Ace Hood, he has a heavy presence on “We Global.” Besides the tracks already mentioned he also appears on the opener “Standing on the Mountain Top” and the second to last cut “Blood Money” co-starring Birdman, Brisco and Rick Ross.

The one question I’m left with at the end of “We Global” is the same one I’m left with every time I review a DJ Khaled album – what EXACTLY does DJ Khaled do? It’s almost as though Khaled is the owner of a major league franchise, where he doesn’t (and can’t) play for his own team, but the best talent money can buy is his for the taking. He brings them all together for one year, takes his franchise all the way to the playoffs, and win or lose he knows next year he’ll just spend some more money to acquire another all-star roster. This results in a lot of victories but not a whole lot of personality, and the closest we get to seeing Khaled’s soul is the fact he tends to favor putting the Southeast’s finest from Pitbull to Rick Ross on his tracks. Khaled doesn’t even act much as a producer, letting other hot mixers shine on his CD’s, so he plays the role of “executive producer” at best. Even though I think “We Global” would be more honest if Khaled put the words “we present” in front of it, the road to the title has been laid down for one more run and Khaled’s going to get as close with this one as any attempt thus far. Best of luck to him.