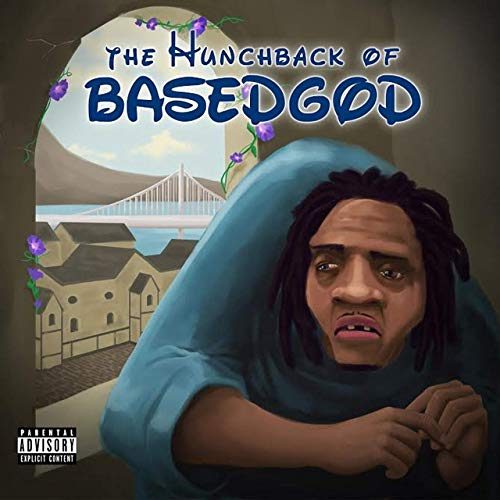 Lil B :: The Hunchback of BasedGod

Lil B is not easily quantified or clarified but there are a few things you can say with certainty. First, Lil B is incredibly prolific. Second, Lil B is VERY active on social media. He probably follows you and you don’t even know it. Finally for those who predicted he’d fall off when his crew The Pack went their separate directions, his entire career since 2010 has been one big unapologetic middle finger. With all of that out of the way it’s safe to say even Brandon doesn’t know what he is or what he’s doing a lot of the time. The song “Artistic or Autistic” off his latest release “The Hunchback of BasedGod” is evidence of that.

There’s no doubt he’s sincere when he says “shout out everybody with autism, let’s get it”. Autism is a word that gets thrown around a lot though without most people having a real understanding of it though, and in the brief span of this review I’m not going to claim expertise on the subject. What I do know is that Lil B writes and produces his own music, has created a very successful social media campaign with #TYBG, developed a worldwide cult following for his unorthodox rap style, and he’s even lectured at MIT. Given that the prognosis for those the most affected on the spectrum is the inability to take care of yourself or even hold a job, I don’t think Lil B is “autistic” in anything but the mildest sense — and realistically I don’t think the word fits him at all.

A more suitable definition of Lil B would be WEIRD in the Kool Keith sense of the word. The longer I think about it the more convinced I am that he’s the younger, West coast, Berkeley, California version of Keith Thornton. Both men are incredibly prolific. Both men control every aspect of their artistic output from start to finish. Both men make a lot of rap songs that are closer to stream-of-consciousness spoken word poetry. Rhyming and staying on beat are not prerequisites to either one’s style. The biggest difference would be that Keith tends to obsess over sex and scatology, while Lil B tends to obsess over how incomprehensible his life is even to himself.

I must reiterate at this point just how hard it is to put Lil B in a box and put a label on it. There’s a undeniable charm to Brandon’s music that can’t be found in a lot of Keith’s self-produced efforts. Kool Keith works better when someone else produces his music and he provides the vocals, while Lil B’s tracks are well polished and reflect a wide variety of musical styles. “Staring Out My Window” has moody self-reflection worthy of the late Tupac Shakur (the song title itself invokes his memory), “I’d Rather Die Than Go Home” sounds like a Marshmello club track, and “Body Shaming” is a surprisingly upbeat and positive take on being comfortable in your own skin.

The bad news is that “The Hunchback of BasedGod” is THREE HOURS and FIFTY TRACKS long. In a previous review Patrick Taylor noted would be better served if he concentrated on quantity over quality, and that he’d make his fans happier in the process. Almost a decade later I can say that Brandon hasn’t learned that lesson, but Mr. Taylor was wrong about one thing — the people still love Lil B. They love the excess, they love that he’s quirky and weird, they love the fact he seems to have no filters at all times. This is where I’d really like to hammer home that Lil B may refer to himself as “autistic” as code for “different” but in fact he’s the OPPOSITE of autistic when it comes to interacting with the public. He’s probably the most accessible rap star of the social media era, and it works for him better than anybody to ever do it. His albums can be bloated with filler and many songs have instrumentals that linger too long, but for Lil B it’s all part of the charm. Try not to take it too seriously and just tell him #TYBG.

Lil B :: The Hunchback of BasedGod
6Overall Score
Music6.5
Lyrics5.5