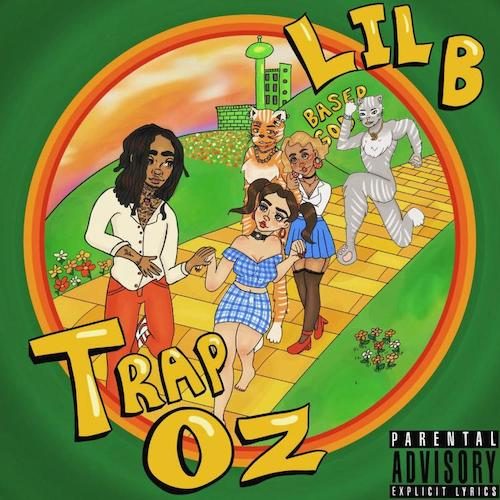 I disagree. Lil B has been a rapper since the mid-2000’s, first achieving national prominence with The Pack, then achieving much larger fame as a solo artist and social media superstar. “I don’t really care who the fuck doubting me” is a much more accurate statement from The Based God on the amusingly titled “I’m Kanye.” They do have a few things in common. Both men rap and produce, both men drop entire projects with little warning, and both men give exactly zero fucks what the “haters” think. The comparison unintentionally points out a problem though. Mr. West is all over the map with outlandish thoughts and ideas, not to mention an ill-conceived Presidential campaign, and his musical genius seems to be crippled by manic depression.

Lil B is known for savvy use of social networks and wildly uneven albums that reflect both his talent AND his inability to reign in his impulses. When he releases instrumentals like “I’m So Happy” on “Trap Oz” it’s easy to see that he’s got the skills to pay the bills. On the other hand on the exact same album he’ll put out a track like “Cheese Board Pizza Berkeley” which could generously be called HOT GARBAGE and less generously a DUMPSTER FIRE. “Not giving a fuck” isn’t always a good impulse, because it leads you to release discordant, sloppily arranged, repetitive tracks that are a turn off to anyone within earshot.

Ostensibly “Trap Oz” has a Wizard of Oz theme, complete with song titles like “Tin Man”, “Yellow Brick Road” and “Lions Tigers Bears BasedGod.” At first it feels like this would provide the structure and focus that B needs to really hone his craft and create his best possible work. Unfortunately this doesn’t work for several reasons. The first problem is that B all but abandons the theme after the enjoyable “Dorothy Thick” instrumental, with not a single song afterward referencing the concept. The second problem is that the songs which do refer to it only do so in the most superficial way. He’s not actually rapping from the perspective of the Cowardly Lion or the Wicked Witch of the West (and how did a Cali rapper not have ONE song on “Trap Oz” with that title). He’s not even rapping ABOUT their adventures. He just name drops Oz shit at random and moves on with his life. “Lions, tigers and bears oh my. I might just sell a fucking bean pie.”

Given that the album is over two and a half hours long, a strong theme is desperately needed to keep Lil B on point and keep the listener invested in what he’s doing here. The presentation just keeps meandering down the proverbial “Yellow Brick Road” though, with an increasing focus on instrumental tracks that are decreasingly interesting to listen to. A few are insufferable just because they’re almost good. “Out This World” has a strong beat, some atmospheric background effects, and a little bit of head nodding appeal. Just when you get into a groove an absolutely TERRIBLE synthesizer ruins it with jarring notes that seem to be chosen solely for their ability to crash into each other like a horrendous car wreck.

With that single element removed “Out This World” would have been a pleasure to listen to, but there’s that “not giving a fuck” rearing its ugly head again. The problem for both Lil B and Kanye West is a large base of admiring fans worldwide who will automatically validate their worst impulses musically and professionally. In the old days before social media existed we called that “dick riding.” There’s a lot of things that potentially put me in that category with Brandon — I respect his hustle, his muscle, his fearlessness and his creativity. I don’t feel negatively about Lil B in any way. That’s why it pains me to say bloated projects like “Trap Oz” are bad. If B truly does record thousands of songs every year, he could put just 10% of them out and keep the rest in the vault for future historians to review. They’d be like “Damn. B was a savvy dude. He took the best and discarded the rest.” Instead we get Lil B with no filters, and while at times that can be either pleasant to listen to or amusing to hear, it’s often just a big mess.