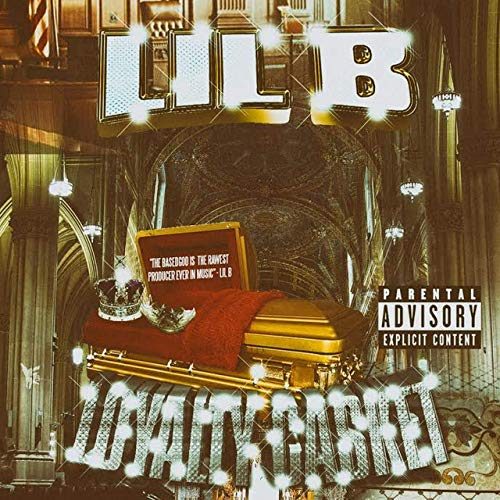 “This shit’ll fall in yo’ lap
You gotta brace yo’self, for all these gaps”

Just a few short months after reviewing “The Hunchback of BasedGod“, Lil B is back again with “Loyalty Casket“. That album came out in late August, we reviewed it in September, and we’re back again. Did I already say Lil B is incredibly prolific? He’s living up to that in spades. In fact for all I know B might have released THREE albums in that time span. When you control all aspects of your own rap career, from recording to publishing to distribution, there’s virtually no limit to how little or how much you can put out. No Limit? Yeah. The cover certainly looks like a classic No Limit Records release from the late 1990’s or early 2000’s. I feel it.

I may be feeling the prodigious output of the BasedGod a little less though. For me it’s getting to be a bit like the endless cycle of Kool Keith albums. As much as you might respect the artistic endeavors of a creative individual and their endless ability to hustle, there’s only so much of their music you can enjoy before it starts to feel like a printing press instead of carefully curated creations. I “Gotta Respect It” because B is a social media genius, a brilliant marketer, a Bay Area legend, all of the above — and yet there IS a limit to how much I can enjoy from one man at a time. It starts to feel like he’s just putting out stream-of-consciousness thoughts over whatever beat seemed decent at the time instead of writing out fully fleshed out songs.

I’ve been trying hard to feel B on this one but “Loyalty Casket” is an absolutely STAGGERING three hours and forty minutes long!! I’m not about to deny that’s an incredible value for the price he’s charging, but the same could be said about giving you a hundred bologna sandwiches for five bucks. Sure that’s value… but are you really going to eat all of them? You might eat one, maybe two, but by the third you’re really going to not want any more bologna… then you got this gigantic mountain of bread and meat sitting on front of you. Do you give it away? Do you throw it away? What the hell do you do with all that shit? It’s TOO MUCH.

I’ll give him credit for truth in advertising when he labels tracks freestyles like the above “Fukin Wid It Based Freestyle”. I can tell he just walked in the studio, possibly a little bit blunted, started nodding his head to the track and just said whatever came to mind. “Play the game like a controller… mo’ games than controllers and… you niggaz don’t understand I’m bi-polar”. Once again respect for the honesty my dude, putting your personal life and mental health on public display like that, but that doesn’t mean it’s a great song to listen to. Just imagine yourself getting high or drunk and firing up GarageBand and talking about stuff, occasionally rhyming, taking long awkward pauses for indiscernible reasons. That’s any song on this album.

Not only is “Loyalty Casket” an incredibly long album, it has some incredibly long SONGS within that massive time sink. “The Hallway Full of Wealth” is almost nine minutes long — we’re entering some Dragonforce “My Spirit Will Go On” territory here. If you like the BasedGod’s quirky lyrical personality you don’t even GET any of that here. It’s just an instrumental. A really long, and quite honestly monotonous, instrumental. B doesn’t utter a single word at any point in the track.

I’m trying hard as hell to be fair to Lil B. I feel he’s often misunderstood and that he’s really on some next level shit when it comes to his approach to the entire music industry. The brother is not just “playing the game” that he talks about, he’s reinventing it and rebuilding it from the ground on up. I can picture a vast sprawling Lil B media empire full of movies, video games, Christmas cards and pet collars for your cats, dogs and lizards. The creativity of the BasedGod knows no bounds, and he’s going to be a success ten times over whether or not “Loyalty Casket” is a good album. #TYBG but I just have to respectfully say I wasn’t feeling you as much on this one.