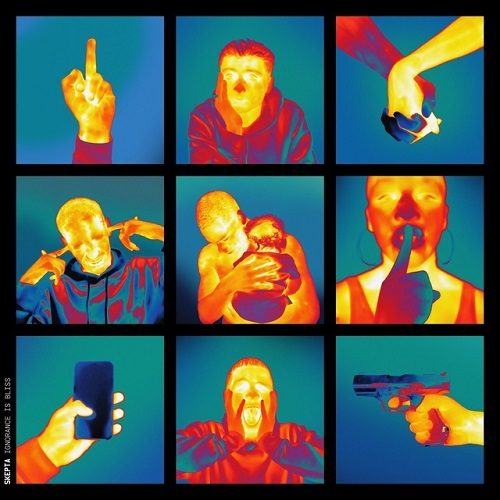 Skepta’s breakthrough album “Konnichiwa” was an important record for the UK rap scene. Well-received on both sides of the Atlantic, it was ultimately an odd mix of Grime and Dirty South-style Hip Hop. For years, Grime was distinct from Hip hop because it sounded British – rather than the staid mimicry of 90s New York aesthetics, so I personally, was left a little cold. The dilution of Grime to appeal to the American audience felt inevitable, particularly after Dizzee’s foray into other sounds that has led to attacks from the likes of Wiley.

Thankfully, “Ignorance Is Bliss” addresses many of these qualms I had. It didn’t have to, given the success of “Konnichiwa”, but Skepta has ultimately produced a better album in 2019 than he did in 2016.

Skepta’s commanding presence is immediately identifiable, but it’s his razor-sharp flow that separates him from lesser emcees. He’s always been potent, but he feels laser-focused on these fourteen tracks. There’s also a heavier electronic sound to the production, with a few tracks possessing a distinct Japanese influence. Skepta’s a fan of the Mega Drive game Streets of Rage and “Redrum” portrays that very image – like he’s strolling through an urban backdrop, clocking heads with lead pipes.

J Hus has built his career around catchy club singles and his contribution on “What Do You Mean?” is no different. He’s on another level to the likes of Lay-Z and Nafe Smallz, but it’s Skepta himself that crafts the catchiest moments. “Same Old Story” is one of Skepta’s best tracks, showcasing that perfect blend of playful flow, relationship rap and knocking ass beat. It’s further proof of how good he is at making the simplest hook become ingrained in your head. Being on the FIFA 20 soundtrack certainly helps too.

“You Wish” is similarly successful, seeing the Tottenham emcee bragging in that unique, self-deprecative way he’s the master at. Lines like “must have been talking about sex if I ever said that I was trying to come second” will make you raise a smile one second, before he questions the talent of his younger competition with “at this age, how is it me still murking?”. It’s a potential worry, especially when pensioners Pete and Bas are two of the hardest emcees in the UK. There’s even time for some UKG with “Love Me Not” throwing in some two-step and the posse cut “Gangsta” featuring Boy Better Know is the icing on the cake. Claiming to have done “young and stupid” and now “they do grown and sexy“, it shows Skepta’s growth whilst also coming full-circle.

Skepta’s managed to deliver an excellent fourth studio LP that caters to both Grime purists, rap fans and mainstream audiences. “Ignorance Is Bliss” definitely feels like an album for the fans. A record to reassure you that while there will be blockbuster moments that will break through to the mainstream, Skepta is more than happy to satisfy his core fanbase. It’s something Dizzee Rascal struggled to find a formula for, so “Ignorance Is Bliss” succeeds in that regard. Minus the terrible “Animal Instinct”, it’s easy to recommend.