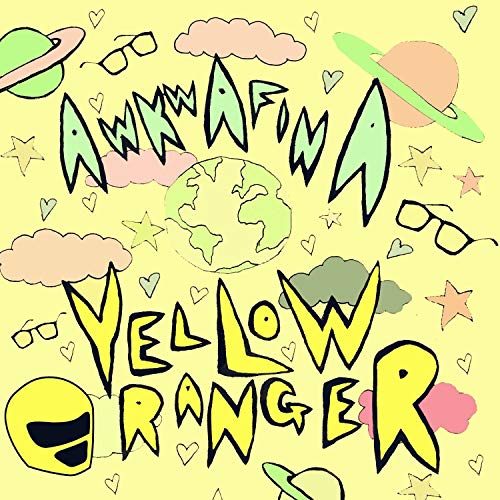 Awkwafina is super hot right now. Her new TV show Awkwafina Is Nora from Queens just debuted on Comedy Central. Nora Lum’s come a long way since the days she wrote the song “My Vag” as a humorous response to the Mickey Avalon track “My Dick”. Her full length studio debut “Yellow Ranger” includes a professionally recorded “Redux” of the song, so if you’ve never heard of the actress/rapper/comedian before this review the original is as good a way to introduce her as any other.

“Yo my vag feel like winning the lottery
Yo’ shit got turned down from eHarmony
My vag, won ‘Best Vag’
Yo’ vag won ‘Best Supporting Vag'”

The essence of Awkwafina then and now is that she unapologetically says any funny, raunchy, crazy shit that she wants with the 100 confidence of a bad ass bitch from Queens. It’s weird to think she’s actually toning it down to go mainstream but if you compare any song on “Yellow Ranger” to her TV show it’s not hard to see. Her album pokes fun at Asian stereotypes and freely indulges in getting high, the latter being the strongest connection between them. “I’m sorry momma, that I am not a doctor/that I rap about the vag and I smoke marijuana”.

Awkwafina tends to sound like Kreayshawn when she’s flowing, although given their respective career paths it’s realistic to think people would discover “Gucci Gucci” and think it’s the other way around. Natassia Zolot went viral and then slowly faded into the background, while Nora Lum has continued to ascend to the point her rap career is now an afterthought compared to success she’s achieved being funny on camera. Rap is where she honed that skill though as you can see in the “NYC Bitche$” video.

“Bitch where your pants at? It’s 25 degrees out”. It’s a random line from the song but it also exemplifies the point about Awkwafina’s appeal — she just says what she’s thinking no matter how crass or rude it might be because it’s the truth. Although “Yellow Ranger” mocks Asian stereotypes the one stereotype it embraces is that New Yorkers (specifically people from the five boroughs of NYC) are blunt to the point of rudeness. It’s the juxtaposition of the daughter of Chinese and Korean immigrants saying these rude things while looking hella cute that makes her funny and appealing to the masses.

Even though being funny is largely the point for Nora Lum, including Dumbfoundead on the song “Come Stop Me” reflects a serious respect for and appreciation of underground rap that didn’t have to be on the album. Awkwafina had already gone viral off “My Vag” and could just as easily done a whole album of sequels to that track and sold it. Perhaps that’s the other stereotype she embraces though — a girl from Queens is a fly girl who loves real hip-hop. I believe it listening to her song.

Production is the weak link on “Yellow Ranger“. It’s serviceable for Nora to rap over, but it doesn’t create songs that demand to be played on repeat. She probably didn’t have the budget to work with people like Alchemist or Primo back then, but if she recorded an album today a lot of producers would probably be begging to drop a beat for Nora from Queens. If you’re a fan of her comedy work you’ll enjoy “Yellow Ranger” but I wouldn’t call it essential. It’s a step on the ladder to success she’s been climbing for almost a decade and worth looking back on as she reaches new heights.