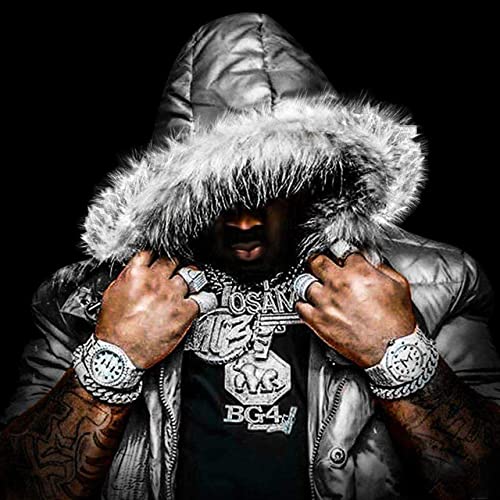 Posthumous reviews always bother me, regardless of whether the rapper involved passed away due to illness, overdose, or homicide. Sadly North Dallas, Texas’ own Melvin A. Noble a/k/a Mo3 is one of the latter. He was chased down the interstate, crashed his vehicle, and promptly shot in the back of the head when he attempted to flee on foot. This act was cold blooded, calculated, and undoubtedly personal. The shooter knew exactly what they were doing, leaving Noble’s three children without a father, and gave precisely no fucks about that fact. The alleged killer was arrested three weeks later and indicted on murder charges last month. For his family’s sake I hope that justice is done, and for the hip-hop community at large I hope the day will come when we don’t have rappers gunned down monthly.

Sadly the video for “Outside” featuring Bobby Billions appears in some respects to be a reenactment of his homicide, complete with mourners paying tribute to him at a late night, outdoor vigil. For that among other reasons the clip has already amassed ten million views before this review was even written. Mo3 was nearly into double digits between studio albums and mixtapes before “Shottaz 4Eva” was released this year, so in my eyes there’s no question he was a rising star of the Texas scene on the verge of national recognition before his untimely demise. The continuing irony of rap music is that his death will cause him to be lionized as a martyr and will quite possibly make him a BIGGER star compared to when he was alive.

Having listened to “Shottaz 4Eva” I can safely safe he’s worthy of the belated recognition. “I left my heart to the streets, I don’t need no answers/Real life stick to the script with no camera.” My feelings about pitch corrected vocals should be well known by now, but with Mo3 they’re not so heavy handed as to completely distort his message. There’s the usual amount of swagger braggart to the Texan’s lyricism, but there’s more than the usual amount of emotional sincerity in his verses. Unlike his killer Mo3 isn’t completely cold blooded, which is why Boosie Badazz took an interest in his career and collaborated with him several times.

He wasn’t the only one. Just a scant few months before his murder, Kevin Gates provided guest vocals on the lead single “Broken Love.” Mo3’s vibe continues to shine through the AutoTune, as he narrates an all too familiar tale of a broken home and an absent father. For that very reason Mo3 is hard on anybody who keeps that cycle going: “My partner don’t take care of his kids, I said you gotta man up/That made him mad but I’d be wrong if I never said none.” That makes it hurt that his children were left fatherless that much more. Gates goes as hard in his cameo as I’ve ever heard him go.

Another thing that stands out for Mo3 is the fact his loyalty runs deep, and his disappointment at being betrayed by his slimes is even deeper. “Thought I Knew” talks about women getting between a friendship when he “found out the shit wasn’t real/I must be dumb as they come.” Don’t take it too hard Mr. Noble. You were betrayed by more people than just fake friends.

“My partner told me that he loved a bitch
I said ‘Say no more, she off limits’ (for real)
But he told mines that I’m cheatin (huh?)
Cause he tryin to fuck, he trippin (what?)
I’ll never put dick in my partner bitch
God is my witness (on God)
He drug my name for the pussy (uh)
‘posed to be my nigga (ha)”

In closing it’s worth noting that “Shottaz 4Eva” features SONGS, not 90 seconds of shit somebody freestyled their way through in the recording booth. Only one song out of the 12 included here is shorter than 2:30. There was a time when that amount of time wouldn’t have been a big deal, but after so many years of people trying desperately to get noticed for doing almost nothing but claiming dozens of “albums” to their name, it’s clear Mo3 cared about his presentation. He tells stories with his tracks, gives you the time to invest in the narratives, and leaves you satisfied that your time was well spent. He truly deserved so much better than the hand fate dealt him. Hopefully the royalties from this one will take care of his children.