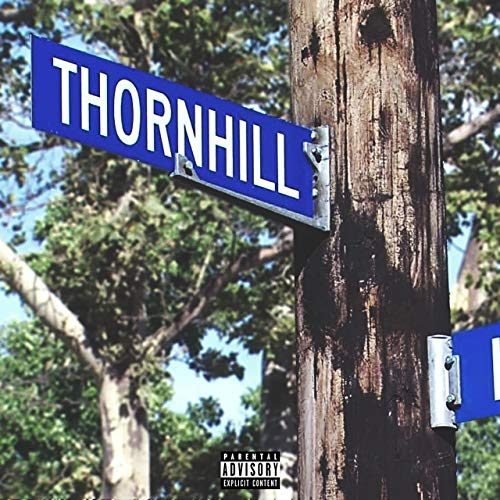 “Your baby daddy’s worst nightmare”. Those are the first words I think of when the name King Chip a/k/a Chip Tha Ripper comes up. A few years ago an animated video of Chip’s “S.L.A.B. Freestyle” went slightly viral on YouTube. Usually the term viral means something that did tens of millions of views, but this did more like 500,000. Nevertheless the video amuses me to the point I still watch it now and then for a laugh, especially the closing punchline “I drive a Chevrolet, movie, theater”.

(EDITOR’S NOTE: The original animated version was taken down by the author. Here’s Chip Tha Ripper’s non-animated original freestyle instead.)

The freestyle and video have both positively influenced me to pay more attention to Chip Tha Ripper, and this review of “Thornhill” is the result. It’s a relatively short album at 31:53, but that’s also typical for most “albums” these days so it’s not a black mark per se. He changed his name to King Chip for a period during the 2010’s, then changed back to Chip Tha Ripper in 2019, so to avoid any confusion we’ll just call him Chip from this point on. The rapper hails from Cleveland, Ohio but like most emcees from the area he deals with the looming shadow of Bone Thugs-N-Harmony over his head. Songs like the Big Duke produced “STO” prove he deals with it well.

Ironically the instrumental sounds like a “chiptune” — not a Chip tune but a track produced by sampling video game sounds or even playing them right through a classic game system and recording it. (Both the NES and GameBoy are popular for this practice.) Appropriately enough there’s gaming going on in the video along with Chip bragging about being able to sell you anything you want: “Pull up and I open up sto’, pull up, pop trunk, sto'”. For Chip the hustle is endless. How else are you going to be able to afford to drive a Chevrolet movie theater? He’s not always in hustle mode though. Sometimes tracks like “Ride Out” featuring Raheem Devaughn are just cool out, laid in the cut storytelling joints.

“No trippin less we vacationing babe
We livin no matter what place we in babe
Let’s switch cars because you look great in Mercedes
Let’s switch bars, we ballin, they hatin too crazy”

Chip is also fond of recreational substances as both heard lyrically and shown visually in “Take a Dab”. This is obviously the point where parents would freak out about their young’uns being fans of Chip, but no rapper ever forced a fan to smoke, drink, or inject pharmaceuticals at gunpoint. “Heat up that rig to 400 degrees, and watch me take a dab and don’t cough and don’t sneeze”.

Chip’s not a role model but I don’t think you’d be that interested in “Thornhill” if he was. So long as the music’s tight and the rhymes are on point you can vicariously enjoy his life. The lyrics don’t slack. In fact on songs like “TakeDown UFC” featuring Trinidad James it’s not hard to tell who the superior rapper is. “If I ain’t hurt yo’ feelings, I’m upset”. It’s that kind of humor that separates Chip from the pack, but it’s odd that it comes even more naturally when he’s freestyling as compared to his writtens. The bass hit of “Cleveland Balled” is undeniable though as is the smooth baller vibes of “Blades”. Listening to Chip makes me wonder why he hasn’t gone more mainstream in the last decade. All the pieces are in place but much like the video I referenced at the start he just hasn’t gone SUPER viral yet.