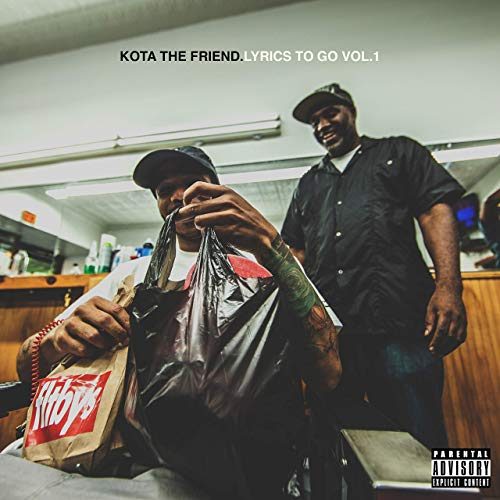 I first gravitated toward Brooklyn emcee KOTA The Friend because he titled his album “Lyrics to Go Vol. 1“. There’s no way KOTA could know this or would care but the first time I backed up the OHHLA database in college, back when it was still small enough to fit on floppy disks, I wrote “Lyrics to Go” and sequential volume numbers on each label. I was then and I still am a big fan of A Tribe Called Quest’s song “Lyrics to Go” and I found it both humorous and appropriate to label the database the same way. Whenever I put the disks in my pocket or my backpack I had “lyrics to go”.

I can’t say that KOTA sounds like Q-Tip or the late Phife Dawg, but it’s not hard to feel Tribe’s influence on “Lyrics to Go Vol. 1“. KOTA is a little more aggressive than either emcee, but his predilection for jazzy instrumentation and smoothly loquacious raps reflect those predecessors and Kamaal in particular. “Forks” makes this abundantly clear. It’s a short song, almost a snack more than a meal, but in that 68 seconds he delivers heartfelt bars about he and others who have clearly hit that proverbial fork in the road.

“And you should know I’m rootin for you somewhere in the nosebleeds
Time flies, it’ll creep up on you like a slow leak
Before you know it we gon’ be old heads
Laughin at our grandkids walkin all bow-legged
I hope you ain’t bitter, I hope you smile big
I hope you find love and that love make you rich
I hope you find peace of mind, we don’t really need goodbyes
Was what it was and it is what it is, yeah”

It shouldn’t be rare to hear something that personal and introspective in rap music, but in a genre often beset by bragging and posturing, KOTA is a breath of fresh air. While some would claim they are the rapper all the women admire and all the men want to be like, KOTA doesn’t the opposite and states a truth that should be obvious — you “Can’t Please Everybody”.

The jazzy synthesizer and softly tapped hi-hat gives the song a luscious vibe like KOTA was a spinoff from The Roots crew. As noted though he’s not all the way live from the 215, he’s a Brooklynite through and through, and it’s not hard to discern a New York state of mind when he gives songs titles like “New York With Love”. The funny thing is that his faster flow on this one could be mistaken for a rapper from Chicago or Memphis, busting quick bars until the song abruptly comes to an end.

KOTA gives us unexpected insights into who he is as a man an artist on tracks like “Hero” with raps like “mental illness put food on my table” or “I had to go away and get the shit right/get back on the mic and tell the people ’bout my shit life” on “Berlin”. It’s those little tidbits that make KOTA all the more fascinating to listen to. The deftly understated tracks flirt with but don’t overpower the verbals, letting you hear each of KOTA’s carefully constructed facts loud and clear. The only major knock I have on “Lyrics to Go Vol. 1” is that for such a fascinating new artist it’s a real cocktease to have ten songs with none that even reach the two minute mark. I know that’s how he intended it so I can’t be too hard on it, especially given that he holds down the whole album for delf with no guest stars. If it achieves anything it’s that it makes me anticipate “Lyrics to Go Vol. 2” that much more because I haven’t heard enough of KOTA The Friend to be satisfied.