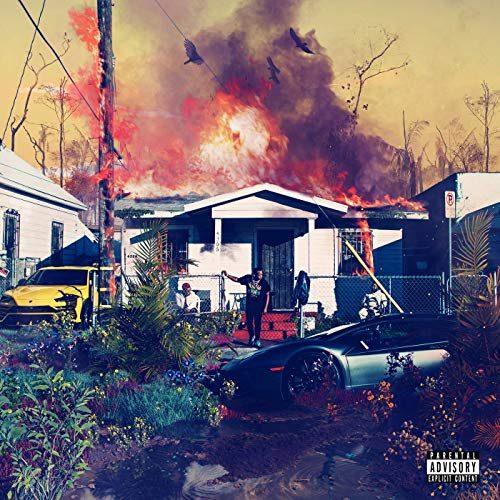 Yo Gotti returns for “Untrapped” with his first album since “I Still Am” three years ago. The Memphos rapper born Mario Mims was embroiled in a litany of legal problems at the time. One of the artists on his label allegedly fired a hundred bullets into Young Dolph’s vehicle, a rapper Gotti has been publicly and bitterly feuding with for years. Shortly after that Gotti himself was a suspect when Dolph was shot in Hollywood. Understandably he’s kept a lower profile since that time, but he lost an appeal for a $6 million dollar judgment against him in 2019 for a case I can only assume is still pending. A payout like that could bankrupt even a successful entrepreneur like Gotti. On a more positive note he joined Jay-Z for a federal lawsuit to stop prison deaths in the state of Mississippi, showing that even as he fights his own battles he’s thinking about the welfare of other incarcerated inmates.

“Untrapped” may therefore be an apt title. It’s a made up word that didn’t exist before Gotti’s latest album, but it can be assumed to be a synonym for “not incarcerated”. His first single “H.O.E. (Heaven On Earth)” has a video which pokes fun at politics, featuring a suited Gotti holding a press conference at a podium while wearing a red hat that says “Make the Hood Great Again”. More telling though is that the hook of the track remakes the old school Whodini track “I’m a Ho”, which shows Gotti’s appreciation for the generations of rappers that came before him in a way most veterans don’t take the time to do any more.

There’s plenty of potential for future singles on the album, many with more crossover potential than “H.O.E.” High on that list would be the quiet storm slickness of “Like That” featuring A Boogie Wit Da Hoodie and Ty Dolla $ign. The F bombs in the verses and the hook would have to be redone or blurred out, but the song is otherwise ready made to blow up, complete with Gotti talking about being a real one for a girl who wants to be just as real with him. The title track with Estelle could be even bigger than that, and it’s one of Gotti’s most political raps of his entire career.

“Where’d we start off? How’d we go wrong?
Niggaz risk it all to put a nigga name in his song
Niggaz fighting over blocks that we don’t even own
Leave the house to get a bag and never make it back home
Bulletproof truck, I’m full time rappin
I wasn’t living like this when I was still trappin
Son seen me shed a tear, he like, ‘Daddy, what happened?’
I’m like ‘Daddy aight, but Daddy don’t know what’s gon’ happen’
Niggaz rappin gangsta lyrics and thinking it’s cool
‘Til you the suspect or victim they post on the news”

It hits hard when Mims raps “They like ‘Gotti you changed’, yeah I call it maturity”. He also says in the outro that social media is filled with a lot of unnecessary flossing and clout chasing, and then notes the same people who act like ballers are the same ones who would snitch on you to the police. I don’t know if the second part of that theory is true all of the time but he’s 100% right about people doing anything just to look cool so they can get more followers.

In the 2000’s as Gotti was steadily elevating his grind in the rap game, Pedro Hernandez opined that Mims “doesn’t want nor need the mainstream” to succeed in the music business. I can’t say that’s true any more a decade and a half later. He seems to be making songs tailor-made for being used in memes and TikToks with bass heavy raps like “Pose” featuring Lil Uzi Vert and Megan Thee Stallion. I fully expect white kids to be lip syncing to this one on the very social media he decries, imitating phones snapping pictures every time he says “hold up, pose”. Even Megan plays with that idea as she “drops a pic for the ‘gram” and notes how thirsty it made her followers. It’s no surprise he already dropped a video for it.

Other sure fire songs for your local urban contemporary or “where hip-hop lives” radio station (provided radio edits are available) include “Dopechella” featuring Rick Ross, “Put a Date On It” featuring Lil Baby and the solo track “Bounce That” which pays tribute to the New Orleans sound and swagger of the last 20-30 years. It wouldn’t surprise me at all to see a remix of the track featuring Juvenile, Lil Wayne or even Drake given his obvious love of Southern hip-hop. “I’ve been a millionaire since 21” brags Gotti, noting that the way he kept his money is “safe sex, no checks”. Unfortunately there are other ways to lose your money than by fathering unwanted children, but it’s not bad advice on the whole.

That’s the curious thing about Yo Gotti . Even though he spends a lot of time on his bars showing out, living lavish, talking about his stupendous ends and sexual prowess, that “maturity” he mentioned shows up in unexpected places. It almost feels like Mr. Mims knows he has an image he has to uphold, so he makes the effort to be the “King of Memphis” he has at times self-proclaimed (or been acclaimed by others) to be. In reality though he’d rather be spending his time running CMG, promoting other artists like Blac Youngsta, who appears on the track “Battle” on this release. It’s not as though Yo Gotti needs to retire any time soon, particularly after dropping a strong effort like “Untrapped“, but after going through so much drama in the last few years it’s easy to imagine him transitioning from MC to mogul and leaving the bars to someone else.