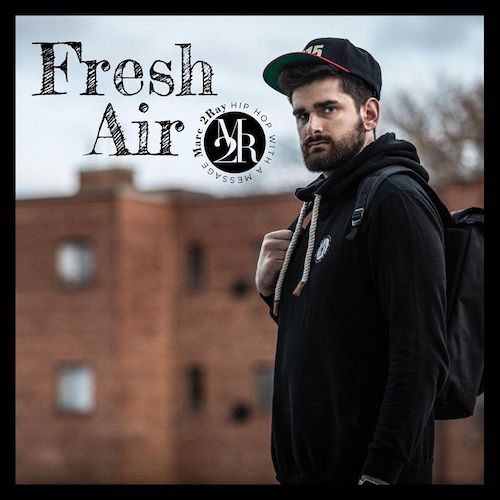 The term “hip-hop is dead” has become just as overused as it is misapplied. While it is true that the mumble rappers who dominate radio and soundscan sales get the lion’s share of attention, those in mourning of hip-hop often forget one thing: Those rappers are not all there is to hip-hop. They look at hip-hop as though they’ve gotten the stench of what they think is its rotting corpse laid out on a coroner’s slab. Other listeners look at the body and think that it needs not a coroner, but a rape kit instead. And then there are the listeners who know that it’s alive, it’s just that they know where to find it across the spectrum of the mainstream to the lesser known bandcamp rapper. DMV hip-hop artist Marc 2Ray is gradually moving towards the middle. In the past four years, his touting of his “Hip-Hop With a Message” hashtag has finally culminated in 2020 in the form of his debut album, “Fresh Air”. He’s made a name for himself with the album’s lead single “1915”, but now we get hear the other facets of Marc’s abilities an emcee on his debut.

The production is sample-free and consists of synth-laden beats with melodic hooks and vocals. That said, and considering this is his debut, Marc does some pretty ambitious lyrical feats on his first shot out of the gate. Take the track “Just Kids”, for example. Marc flexes his storytelling muscles to provide a 3-verse 6-minute long narrative. Produced by JPrice, the beatsmith makes use of a piano and synth strings, over which Marc raps a very detailed account of his childhood sweetheart’s dark descent into addiction. In comparison, I think of it as a more tragic and more somber companion to De La Soul’s “My Brother’s a Basehead”. JPrice also laces the beat for the album’s intro “Inhale”. It’s less than a minute long, sounds reminiscent of ’80s synth wave, and comes with a 16-bar verse from Marc welcoming listeners to his debut. Another track with a similar synth cue is “Fresh Air”. Produced by bonHAM, the title-track features Kwame Darko who raps with a rasp in his tough flow in contrast to Marc’s intense delivery. Given the content of Marc’s verse, it’s accurate to say that it’s one of several tracks that are synonymous with his “Hip-Hop With a Message” hashtag.

While verses with substance and content are Marc’s specialty, he also knows how to have fun with hip-hop. On the Calin Enache-produced “Sick Nasty”, Marc and The Four’s Nick Harrison trade verses showcasing their skill sets with wordplay and multisyllable rhyme schemes over the electro trip-hop sounding production. Then we get to the Godfather-produced “1915”. This has been Marc 2Ray’s signature song for the past 4 years. Both the song and its accompanying video are a hard-hitting exposé of the Armenian Genocide and the continued denial by governments around the world of its occurrence. As Marc is of Armenian heritage, that qualifies him to rap on the topic. And while the genocide has been mentioned in lines spat by more political rappers, “1915” is perhaps the only time a rapper took to the subject head-on. He returns to his love for rap on “Back to Hip-Hop”, featuring Maryland rapper Brain Rapp. Produced by JPrice. Both emcees take aim at wack rappers over a beat filled with club energy, and LEGO avatars in the music video:

Marc holds his own on the mic, though I think there were two tracks where he was bested slightly. The first actual full-length song on the album is the bonHAM-produced “Need Your Help”. The production reminds me of the music used in the intro credits to “Stranger Things”, and it features Washington, D.C. native Kam Royal, whose flow and wordplay on this track contained a little bit more precision. Similarly, on the Profa-produced “Spread the Love”, both J. Artz and One Sun also steal the show, especially the former with the double-time flow he effortlessly employs halfway into his verse. As for the production, the track is very airy which goes good with Black Cat’s atmospheric vocals on the hook. While the album closer “Exhale” has Marc citing his inspirations for getting into the rap game, that topic is given more of a shine on the album’s 3rd single, “Gotta Dream”. Produced by bonHAM, this song contains the best beat and hook on the whole album. With Marc rapping about having perseverance in pursuing your dreams, he spits a first-person autobiographical narrative of his come-up, he even includes his parents in the accompanying video. It’s a fast-paced head-nodder, one that compels you to continue even as you’re singing the melodic hook:

Though Marc 2Ray isn’t a well-known rapper, the activism which he’s laced into some of his lyrics have gotten him some notoriety. For “1915”, the man actually received death threats from Armenian Genocide deniers. But he hasn’t let that stop him, not even in the least. With “Fresh Air”, he brings a brand of hip-hop for today’s younger listeners who’ve grown tired of non-sensical raps and the even more senseless attention they’ve garnered; and the underground backpackers of yesteryear which he embodies on the album’s cover. Though only 10 tracks long, “Fresh Air” is a mostly solid debut with glimpses of what else Marc 2Ray can potentially do musically in the future.