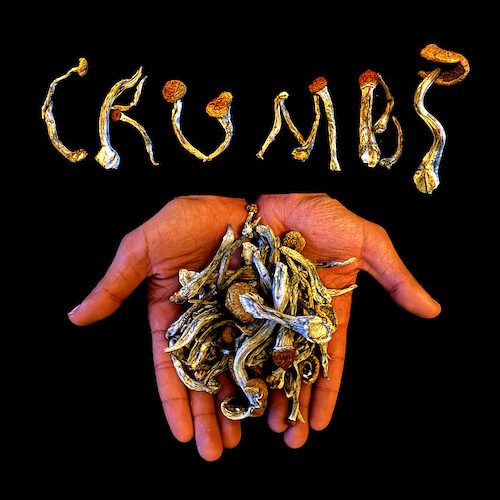 I was a little confused by this album. The original “Shroom Crumbs” dropped a decade ago and this new release has the exact same album cover minus the word “Shroom.” At first I thought it was a re-issue remastered at higher fidelity that dropped the “Shroom” reference just to avoid any controversy about ingesting psychedelics. That’s not the case. I found a press release explaining what “Crumbs” is about and I think it’s easier for all of us if I share an excerpt of it here.

“To drop CD/Digital formats on Dec 20th via Public School Records, ‘Crumbs’ is the follow up to 2009’s ‘Shroom Crumbs’ and like that former release was entirely produced by the iconic DJ Przm prior to his passing in 2007. In fact all of the tracks on the EP were culled from long-lost late night recording sessions in Przm’s Columbus, Ohio studio and involves many of the Spitball crew (of which Bru, Przm were cornerstones).”

While that explanation offers some clarity it also raises more questions. “Shroom Crumbs” was an EP and so is this follow up release 10 years later. Wouldn’t it have made more sense to drop one full album at one time shortly after Przm’s passing instead of two half-albums a full decade apart? Furthermore if there are that many recording sessions of worthy material, how are there only two EP’s worth of material the late Przm produced? The aforementioned PR mentions Bru Lei has a record release party opening for Ghostface Killah in Sacramento, which makes me think if things had been different Bru’s fellow Columbus artists could have been headlining.

The fact this album features a posthumous producer is at least a script flip on the usual practice of featuring a posthumous emcee, but it could also be said to feature a posthumous crew since so many members of Spitball have passed away. This gives “Shrooms” an apparition-like quality where the producers, emcees and EP itself all seem to be lost in time, trying either to connect with the living or move on to the afterlife, forever stuck in limbo.

Lines like “Every rhyme I write is post-dated/not to be released this year, most hated … and they learn to appreciate it seven years down the line” only add to the otherworldly quality. That prediction was only three years off. As odd as the whole thing is though, I can’t deny the ruggedly headnodding quality of Przm’s beats or the grimy bars the rotating cast of underground emcees spit over the 20+ minutes of this short release. It feels like unapologetic grave robbing, but it’s not necessarily cause for consternation given we actually see holograms of dead rappers performing on the regular now. In terms of taste “Shrooms” is nowhere near that bad.