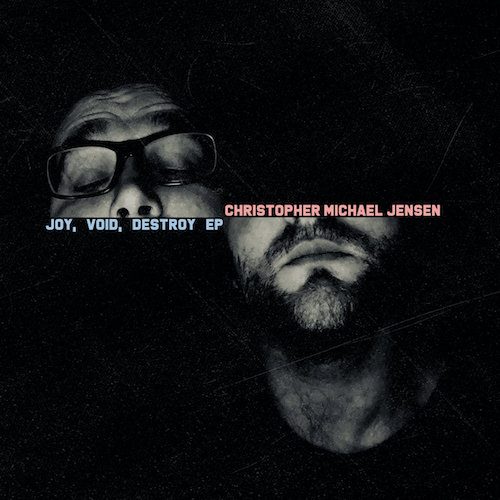 In the span of a decade this is the fourth release we’ve covered by Christopher Michael Jensen. If that still makes you say “WHO?” believe me I understand. Despite a consistent hustle and a steadily improving product, CMJ has never transitioned to being a major name in hip-hop generally or the music world collectively. I hate to be pessimistic but it’s quite likely that it’s never going to happen for him, and I can cite at least a few reasons why. The first one is the most cynical — Minneapolis already has its white rap legend and it’s not Mr. Jensen (sorry bro). That leads directly into the second reason though — CMJ is totally unaffiliated with any clans, posses, crews or cliques. He’s on a DIY hustle which gives him complete artistic freedom along with relative anonymity compared to better funded emcees.

Although being this ruggedly independent probably means CMJ still has a day job, it certainly hasn’t affected the thoughtfulness or quality of his music on the “Joy, Void, Destroy EP“. I have to include the extended play distinction as part of the title because Mr. Jensen did so himself, but if I’m being perfectly honest here I’ve personally decided it’s a long player because it literally is at 28 minutes. That’s more than a lot of so-called albums I’ve reviewed lately, and this album (again my personal choice to call it that) is expertly mixed from start to finish by CMJ and his oddly named cohort Ice God The Macgyver. Production is credited to Infinity Suite, which could either be a producer’s name or the actual name of a suite of production software, but I’ll stake that it doesn’t matter either way.

“Again and Again” is the kind of song and video that gives Mr. Jensen his credibility even in the face of undeserved obscurity. While his decade long work ethic is the title of the song and the mantra of the hook, he vows that despite never being world famous he won’t start “bitterly succumbing to misery in an industry that screws more people than Glenn Quagmire”. Putting a face to that determination may help him be recognized on the cold streets of the Twin Cities, but it also shows that CMJ has nothing to hide. He knows what he is and who he is and is not putting on airs or flossing like a boss. The humble pride makes his snaps all the more charming, from pro wrestling references like “there’s a New Day coming like Xavier Woods” to rap ones like “make sure you keep an eye out like Fetty Wap“. I’d be lying if I said I didn’t laugh out loud at the last one.

Before you get the impression that CMJ is more positive than a born again life coach, there’s an undeniable yearning for improvement in a hip-hop scene that has “too many rappers but not enough hot” as he quips on the piano laced “Give Me Something”. Mr. Jensen is searching for what’s missing in a world filled with aimless rappers who drowsily mumble their way through bars they may not have even bothered to write down. Unfortunately for both Jensen and the listeners that may be akin to pushing a gigantic boulder uphill. The people want what they want and they don’t necessarily buy thoughtful lyrics from a man who describes himself as “a cross between Chun-Li and Chuck D” on “Microphone Check” but he’d rather fall on his sword than dumb down the presentation to sell more records. It’s hard not to respect those ethics. “So fuck the cars, fuck a mansion and a chandelier/I just want to try to save the world like a Planeteer”.

I’m probably more bothered about the success or failure of the “Joy, Void, Destroy EP” than CMJ is. It’s frustrating to me as someone who makes reviewing music his business to know that what sells is not necessarily what makes for good art. On the flip side I’m one of those people who makes his disdain for movie awards public, because it’s invariably “art house” films that get trophies and not the fun shit I enjoy going to. I can’t tell people not to enjoy mumble rap if they truly do because that would make me the worst kind of hypocrite, and there’s some of it that I truly do enjoy myself, but I’d still like to see someone like Mr. Jensen succeed on the merits of his talent if the general public was open-minded enough to listen.