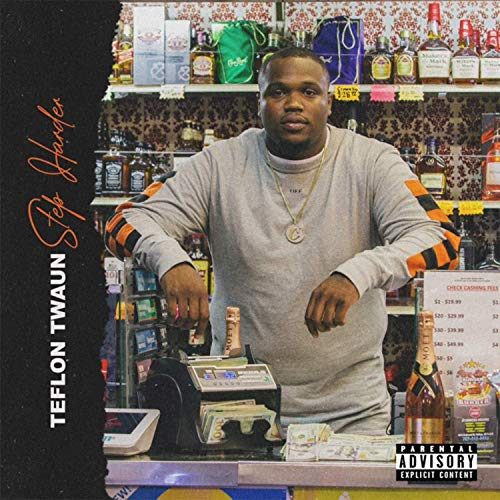 In the opening track of Teflon Twaun’s “Step Harder” album there’s a casual reference to Earl Stevens. “I’m E-40 nephew, I can’t save-a-hoe, uhh”. I can’t find the evidence to either confirm or deny Twaun’s familial relationship but I do know that one of his nicknames is “The 707 Don”, which just happens to be the same area code as E-40’s home turf of Vallejo, California.

It only takes one more track to confirm that Twaun is hella Yay too. His next track is “Rollin Thru Vallejo” and features another well known Vallejo rapper frequently heard collaboration with Earl — one Nef the Pharaoh.

Through the half hour of “Step Harder” the guest appearances come fast and furious, to the point that I both appreciate him showing love to the people he knows best and wish he had been slightly more selfish about being the star of such a short album. “Drippin In Gold” exemplifies the problem. It’s not that listeners won’t appreciate a track featuring stars like G-Eazy and Rexx Life Raj, but how does Twaun get his shine with so much gold already reflecting from the cut?

I couldn’t find one track on Twaun’s LP that was completely solo, as even the album’s intro “Untouchable Whoop” featured Sada Baby. The guests are all properly respectful to the star of the album, as artists like Wantmoren8 declare “In Twaun we trust” (which was also the name of a Twaun mixtape) on “Last of the Real”. I’m still perplexed though as to how some of the artists got their names and freely admit to not knowing who they are. On one song along “Stand Up” you’ve got Seddy Hendrinx, BandLife Fonz and TRENCH RUNNER POODLE. That’s a real name y’all, I’m not making it up.

I’m a Vallejo rap fan going back to the earliest days of The Click, due in large part to having the good fortune to grow up in the Midwest, where there was no decided bias for the West coast, East coast or the Dirty South. At any time in my ride I could either be bumping “Captain Save-a-Hoe”, “Ain’t No Half Steppin'” or “Mind Playing Tricks On Me”. Good music is good music no matter what accent you have, turf you claim or slanguage you slang. That’s why I’m frustrated with “Step Harder“. If Twaun really is Earl’s nephew, he should use that to get a foot in the door, then bust it wide open with his own personality. Instead it feels like everybody bumrushed the door at the same time and Teflon Twaun never really gets his chance to show us who he is.