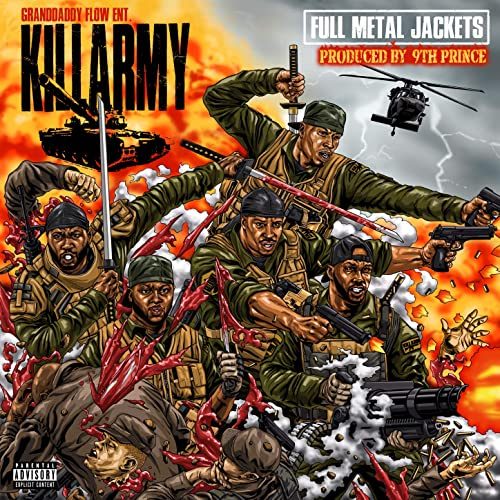 The legacy of Killarmy is built upon the success of the Wu-Tang Clan — so much so that founding member 9th Prince is RZA’s younger brother. He’s also the producer of “Full Metal Jackets,” the first album from the group as a whole in almost 20 years. That hints at the one major problem Killarmy suffered from even at their peak — neither 9th nor any of the rest of the clique could escape the Wu’s shadow. At the Wu’s peak fans hungered for any ancillary project that could expand the Wu-Tang universe, and scores of secondary and tertiary projects with increasingly flimsier ties to the core members got released. Even though Killarmy had better credentials compared to many of their contemporaries, when the thirst for Wu projects died down, fans seemingly lost interest in their mixture of militant sound and conspiracy theories.

For his part 9th Prince tried to keep the group’s legacy alive, but he couldn’t single-handedly resurrect the army of Killarmy fans that were out there in hiding. “Full Metal Jackets” attempts to do that by offering a mixture of familiar Wu-Tang familia and like-minded guest stars who can slip smoothly into the sound. That’s why on tracks like “The Shootout Pt. II” you’ll find the aforementioned tertiary members like La the Darkman, while on “Rusty Dangs” you’ll get bars from beloved underground rappers like Planet Asia and Ras Kass. The latter’s tongue has not lost any of its sharpness over the years, bragging “I got ‘Pac genes” in a way that only he could pull off on a track.

It’s hard not to notice the references to Killa Sin being in prison on this release, and I suddenly discovered he’s doing 16 years to life on criminal weapons possession charges. That adds a dark irony to the track “Just Like Prison” featuring stic.man from Dead Prez as well as robbing the group of one of its most compelling voices. It also shifts the narrative of the album from being updated by guest starts to needing those guest stars to fill a hole left by Sin’s absence.

“Full Metal Jackets” opens with a skit called “The Virus” that will inescapably tie this album to the global coronavirus pandemic. They’re far from the first rappers to reference present day events during these challenging times, but my own memories of the group are forever tied to another historic event — their third album was released on September 11, 2001. The rise of conspiracy theorists after 9/11 sprang full born from the imagery of the Illuminati perpetuated by hip-hop artists on both coasts, including the aforementioned Ras Kass’ epic controversial “Nature of the Threat” track. As much as I enjoyed Killarmy and their “Behold a Pale Horse” inspired raps and camouflage fatigues, it’s just not the same without Killa Sin or Dom Pachino, who left the group shortly after album three. Songs like “Combat Neurosis” try really hard to recapture the vibe though.

Ultimately that’s the problem with “Full Metal Jackets” — it can’t decide whether it wants to bring back the pre-9/11 era of Wu-Tang ascendance or be reborn as something new in the post-COVID-19 era. The production of 9th Prince is solid throughout but it leans into familiarity with past Killarmy projects that may not exist for most people after a double decade hiatus. It’s far from a bad album, but much like their last album, I think it’s going to wind up tied to a very specific moment in time when everything changed and seem incredibly dusty out of context as a result.