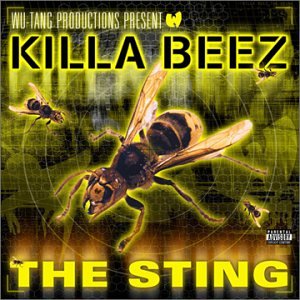 In 1998 we were first introduced to the concept of “Wu-Tang Killa Bees” as a compilation that included both upper echelon Clan members like Ghostface Killah and Inspectah Deck along with minor league rookies like the Black Knights and Remedy. Sporting a few outstanding cuts, it was for the most part a mediocre album that gave Wu-Tang fans a temporary fix until both Inspectah Deck and GZA released new solo albums for the fans in 1999.

Having already tested the willingness of Koch Records to breathe new life into old projects with “Bobby Digital in Digital Bullet,” the RZA was free to strike again and has thus brought back the Beez (now sporting a leet ‘z’ for that extra hardcore attitude) for 2002. The problem now is the same as it was then – sporadic appearances by the veteran Clan members and too much filler by their benchwarmers. To some degree it’s understandable, since Method Man has a full time TV and movie career, Ol’ Dirty is in and out of rehab (though he does bless one track), and other members are probably working on new solo LP’s or the next Wu-Tang Clan group album.

It should come as no surprise then that the lead single “Killa Beez” wisely chose to feature Bobby/RZA, Inspectah Deck, and U-God. The best analogy I can find for this though is a cheap ice cream vendor who gives you a sundae that looks good on top but has a big pocket of air inside after just a few spoonfuls. If you’re looking for the flavor, there are a few good bites here and there. Killarmy’s “Dancing With Wolves” shows why they’ve been a Wu affiliate worth checking for as 4th Disciple blessed them a nice track with a little eerie wind whistling through it. “Take Up Space” features the slow-flowing Lord Subperb over a bent sounding RZA joint with Solomon Childs lending him a verbal assist. The best tracks though are still the ones with Clan fam repping heavy: “Doe Rae Wu” with Ol’ Dirty and RZA, and “KB Ridin'” which is billed as a Clan track featuring Shacronz and Suga Bang Bang.

Fortunately (or perhaps unfortunately if later editions omit it) this CD came with a “bonus disc” including six more tracks – think of it as another scoop in the sundae plus an extra sprinkle of nuts. This disc plays and feels like a disc of material that was left off Bobby Digi’s last album, but that doesn’t mean they’re loser songs though. In fact “Odyssey” featuring the Isaac Hayes Band and “Digi-Electronics” with Doc Doom and Timbo King are fat hits of that truely demented funked out RZA shit. Throw in True Master’s “La Rhumba” remix (the same beat with Fat Joe instead of Beretta 9 and Killa Sin) and this extra scoop goes a long way towards making up for that hollow spot. Unfortunately though the heart and soul of this album is also-rans who wouldn’t be on wax if they weren’t cousins or friends of the big league Wu-Tang Clan hitters; and except for Lord Subperb and the group Killarmy they basically sound like Triple A players called up to fill in for an injured reserve. It didn’t work in ’98 and in 2002 the message for RZA is still the same – send the rookies to the showers.