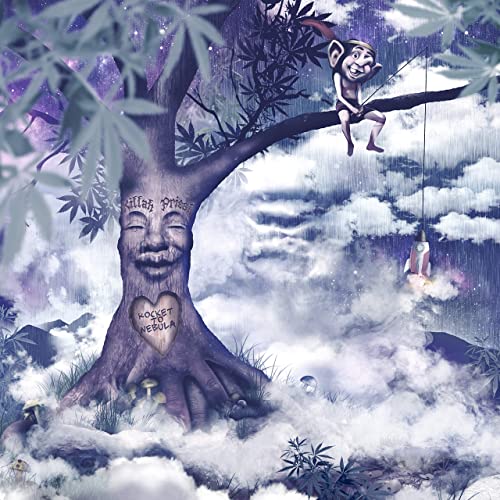 “Y’all wanna be the GOAT? I’ll be the wolf dressed up in sheep’s clothing when it’s time for hunting lamb.”

Killah Priest has always forged his own path. Even though he was introduced to hip-hop through Wu-Tang in the 1990’s and has continued to work with them over the years, the majority of his catalogue has little to do with the Clan. Within the core Wu there are many differing views from God-fearing Christians to Five-Percenters, but as a Black Hebrew Israelite emcee Priest stands out even amongst their diversity. That alone could account for Walter Reed going his own way, but it’s much deeper than that. Priest’s flow has more to do with Saul Williams than Shawn Carter. He doesn’t so much rap as speak over beats. On “Rocket to Nebula” he uses those beats to tell stories.

Priest has always had a deep gravelly voice. “Grandmother’s Land” takes it to another level. His lungs have been filled with peace pipe smoke, and at times you’d swear his larynx was about to collapse on itself. If you weren’t a fan of KP going in this might be the sonic equivalent of a hyperactive feral feline on catnip being held up to a chalkboard against its will. For those who have been with him for the last quarter century, it’s a familiar sound that has been taken to a new extreme. “Heavier Mental” references that history but also dials down the calcification of his throat a few notches.

The culthood of Priest involves the fact that his words are a parable wrapped in a riddle hidden with an enigma. Songs like “Andromeda” play up the mystery. The music runs backward, animals chirp, howl and bark, and the vocals spill over the noises in a seeming stream-of-consciousness delivery. “I wave, talking to the mic/Engage, days lost/The shadow windowpane begin to frost/Nebula registered, nah we in the Andromeda/I hear sounds like a harmonica/Wheels down, checking the monitor/I’m aware I’m the foreigner/but prepare like a popular philosopher.” Suddenly the seemingly stoned delivery is interrupted by a gospel singer wailing “play the organ, oh no no no no” and an unexpected Vocoder performance.

It’s all batshit insane right? And yet it makes perfect sense coming from Killah Priest, because he was just barely a conventional rapper when he released “Heavy Mental” back in 1998, and he has been drifting further out from the center core of emceeing at a steady rate ever since. As such calling his album “Rocket to Nebula” fits perfectly. I don’t know if it’s possible to find a consensus agreement on whether or not Priest is a rapper at this point, but I do know he’d be far less interesting if he “dropped bars” in a manner suitable for radio play, mixtapes, or playlists. That’s not what he is nor is that what this album is. It’s a journey through a black hole toward an unknown (possibly non-existent) destination tripping on hallucinogens.

“I’m prepared to write all this/from day to night until I’m exhausted/I’m paranormal, clairvoyant/Time travel portals, I toy with.” This is the psychic world of Walter Reed. His mind travels at magnificent speeds around the universe. He might be speaking in tongues, he might be the sagest prophet who ever lived, and he might be a madman babbling from Babylon. He’s probably all of those things at once. If you want boom bap, head nodding beats, and dope punchlines then “Rocket to Nebula” isn’t for you. If you want politically charged poetry with a powerful point this isn’t it either. Killah Priest is in his own lane and it’s one he created entirely for himself by himself. Buy the ticket, take the ride.