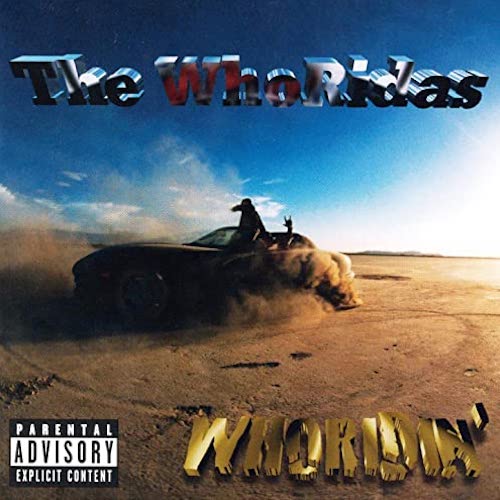 At times trying to preserve elements of hip-hop history feels Sisyphean. Personal computers have been (somewhat) affordable since the 1970’s, the internet has been (somewhat) available to all since the 1990’s, and personal cell phones that combine the power of both took off around 2007. You might assume each generation would go back to record the information that was available to the group before, but everybody just seems to assume it goes down like that without actually doing it. Many pioneering moments of hip-hop music and culture in the 70’s and 80’s almost went undocumented and many more still remain unchronicled. As the veterans of those days age out and pass away, there’s a huge risk of vast amounts of knowledge being lost to time because nobody wrote it down, filmed it, or recorded it in any way.

“Who cares?” WHO indeed. “Whoridin’” by The WhoRidas proves that even rap artists from the 1990’s run the risk of vanishing without a trace. Their laughably spartan Wikipedia entry tells you next to nothing about the group or their history. To properly tell you their story I need to start with Saafir the Saucee Nomad. The Oakland rapper was a major factor in the scene in early 1990’s, a close friend of Digital Underground and D.U.’s soon to be rap superstar Tupac Shakur, and his memorable cameos on various albums got him a deal with Qwest Records and his own solo album in ’94. A posse of young hungry rappers named the Hobo Junction coalesced around him, and although initially they seemed to be cool with the Hieroglyphics (Saafir appeared on Casual’s “Fear Itself” on the song “That Bullshit”) the competitive scene in the O led to a climactic rap battle on KMEL FM radio.

I had the good fortune in college to have a friend from the Bay Area who taped that battle and sent me a copy. Host Sway (and his deejay King Tech) tried to keep things chill, but several times one rapper from the Hobos or the Hieros would say something extra salty in their freestyle disses, and even halfway across the country I could feel the heat. Saafir and his crew claimed the Westside, and the Hieros the Eastside. Each time order would be restored and the battle would continue, and though my feeling at the time was that the Hieroglyphics crew prevailed, it also felt to me like Hobo Junction gained a larger profile off word of mouth and copies of the battle being spread all around the world. Thankfully this part of history has NOT been lost to time and you can still hear the whole thing as it happened.

How do The WhoRidas tie into all of this? Simple. They’re part of Hobo Junction both by choice and by blood. The duo is comprised of Mr. Taylor and King Saan, and the latter is Saafir’s younger brother. As I stated everybody (at least initially) benefited from the Oakland conflict, and The WhoRidas got signed by Delicious Vinyl (home to The Pharcyde among others) with “Whoridin’” dropping Nov. 25, 1997. Preceding that album was the lead single “Shot Callin’ & Big Ballin’,” and being a college radio DJ at the time, we got a major press kit at my station on it. I still have the bumper stickers slapped on some drawers of tapes and I personally kept the twelve inch single in rotation on my late night shifts.

I may have aired the REMIX even more though. I was (and I still am) a big fan of Saafir’s off-beat, on-beat charismatic flow, and hearing him tag team over an extra saucy bass heavy flip of the song was ABSOLUTELY the jam. Sadly this version didn’t make it onto their debut album.

So what happened? Nothing. Despite the good buzz the Hobo Junction, Saafir and The WhoRidas had, Delicious Vinyl seemingly abandoned their promotional push and just quietly dropped the album in ’97 with no fanfare. If there was a second single off “Whoridin’” I never heard about it. Ironically “Never Heard” is the lead track that opens their official debut.

“When the beat drop/we gettin funky like the weed spot.” It’s a fine start to what was (for me at least) a highly anticipated release. That four-and-a-half minute opener is followed by nearly an hour more of music. Albums were ALBUMS back then and the entire thing has that prototypical California rap sound, combining both the underground appeal of thuggish songs like “Taxin'” with commercially friendly G-Funk style tracks like “Off the Ringa!” Lines like “you got to be a hog in this bitch” would’ve needed some clean-up for radio play, but it’s shocking that nobody TRIED. The reference to Too $hort on the track still makes me smile.

I wish I knew who the sexy voice was that says “off the ringer” on the hook, but it doesn’t matter really. What does matter is that the group took WWW and redefined it as something other than the “web” by christening it the “World Wide WhoRide.” It’s a minimalistic track but it perfectly captures the feeling of the duo’s come up: “You can’t stop us on our worldwide campaign/better pay attention mayn!”

There’s an undeniable hunger here exemplified by songs like “Till the Wheels Fall Off.” The WhoRidas may have represented the Hobo Junction on their album and in legendary hip-hop rivalries, but they weren’t going to be defined by that alone. “Moving so fast/at the same time having a ball” is their motto as they endlessly hustle, while simultaneously flashing enough weaponry to become as symbolically phallic as their tricked out rides.

Basically what I’m saying is King Saan and Mr. Taylor deserve better than a bare bones ass page on a supposedly “authoritative” resource. I don’t know who to blame really. “Whoridin’” may not be the greatest thing since sliced bread, but it’s an incredibly solid debut album that must have gotten more rotation in the O than it did where I lived. Maybe that’s why Delicious Vinyl gave up on it. They decided the whole thing was too local to the town and wouldn’t have broader appeal nationally. They might be right. While the Hieroglyphics crew managed to expand year after year throughout the 90’s dropping albums for every affiliated member, the Hobos seemed to pin all of their success on Saafir, and he never took off the way Del or Souls of Mischief did. That has nothing at all to do with talent and everything to do with a fickle industry and equally fickle listeners. Neither The WhoRidas nor “Whoridin’” should be forgotten though. Let’s preserve this history.