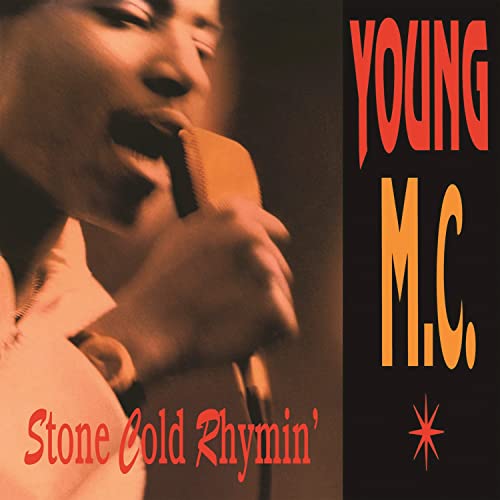 Even as a young’un myself Young M.C. was a meme, although there was no such thing as we think of it today. If something humorous spreads to the point that every single person is sharing it though, what else would you call it? Kids, adults, stand-up comedians and rap writers all said it. “What’s Young M.C. going to call himself when he grows up? Old M.C.?” Everybody would laugh… at first. Like many memes the humor loses its bite over time, and eventually you just wind up rolling your eyes because it’s played out.

Little known to me or any of the other wannabe comedians at the time was that “Young” was his actual name — Marvin Young. He was relatively young at 22 years old when “Stone Cold Rhymin’” came out in 1989, but legally an adult just the same. If he had any qualms about his nom de plume I think he would have realized it by that point, but I’m sure for him the double meaning was incredibly apt. If you’re a young emcee and your last name is already Young, why NOT call yourself that? Before Tung Twista was out setting world records for his rap delivery, Marvin Young was showing off just how fast a young man could spit on the mic.

There’s no avoiding the elephant in the room here. If you didn’t grow up with this album in your rap collection, there’s only one reason you know of Young M.C. and that’s “Bust a Move.” It’s such a ubiquitous part of pop culture that many people will describe Marvin Young as a one hit wonder. IN FACT one of my favorite series on YouTube did exactly that. As Todd in the Shadows says himself in the intro, “If you want it baby you’ve got it.”

As a fair man though Todd points out that it’s how people think of him despite not being true. After starting out as a song writer/collaborator for Tone Lōc, Marvin Young was ready to bust out on his own (pun intended) and had a lot of material ready to go. There were at least six singles off “Stone Cold Rhymin’” and “Bust a Move” may be the best known, but it’s certainly not the only one to chart. “Principle’s Office” may have cemented his meme status though by playing up the YOUNG in his name, making him appear to his audience to be a mischievous teenager.

Another downside to “Stone Cold Rhymin’” is that the most memorable songs from the album are the first three tracks — “I Come Off” featuring N’Dea Davenport on vocals, and the two singles previously mentioned. I can’t find chart information for “I Come Off” but I personally preferred it to “Principal’s Office” in every respect. While Young’s rhymes have been measured as simplistic in their structure and delivery, both at the time and with the benefit of hindsight, I must have been too naive perceive those deficits at the time. “To battle me you’re really taking a risk/cause you’re an eight track tape and I’m a compact disc/Like Tyson drops bodies in rapid succession/that’s how I’m dropping emcees in the rapping profession.”

Unfortunately the success of Young M.C. was also his own downfall. Rap music was going through an identity crisis at the time his singles were charting, with harder edged gangster rap from California and Texas edging out the politically conscious or pop friendly rap songs of the 1980’s. If you’re listening to N.W.A or the Geto Boys, doesn’t a song like “Know How” seem corny by comparison? In a vacuum it stands alone as a fine song, but in the context of the raps of his contemporaries, his lack of cursing, drinking and promiscuity made him seem like an overly eager sellout whose entire style was handed to him by a team of record executives. Even if it was authentic Marvin Young, perception became reality in a heartbeat, and nobody wanted to be the next Young M.C.

The same people who flocked to the dance floor for “Bust a Move” ran away from Young M.C. just as fast once he started doing raps for Taco Bell and Pepsi. Thankfully for Marvin Young having one HUGE song proves to be better than a whole decade of mediocre songs and albums that followed, because he can bank off the sales of “Stone Cold Rhymin’” and the royalties from his chart topping track for the rest of his life. That’s the thing about being a one hit wonder — even when it’s an inaccurate moniker, the fact you had ONE HIT that big earns you a permanent revenue stream unless you do something heinous to publicly disgrace yourself. It is therefore fitting to note that Marvin Young has not been the subject of any Behind the Scenes specials about how he blew all his money on hookers and coke. What was perceived as music industry BS turned out to be the real Young M.C. all along — he’s just a nice guy. He DID wind up on VH1 though, winning Celebrity Fit Club 3, so busting moves really paid off all the way around.