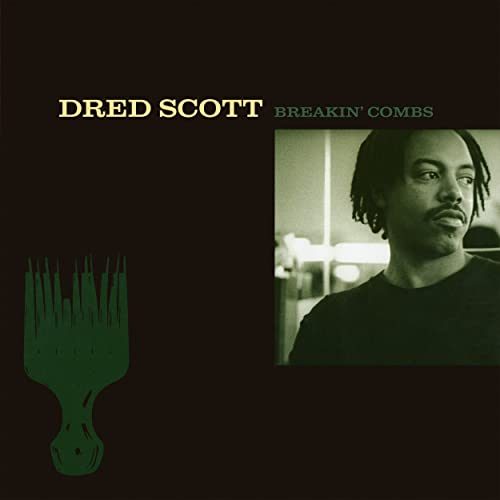 It blew my mind to see that physical copies of Dred Scott’s “Breakin’ Combs” were selling for $200 on Amazon. First of all don’t pay that much for an obscure rap album unless you’ve got Bill Gates money or you’re the biggest fan of Dred Scott there has ever been. Second of all the album may be somewhat obscure other than to hip-hop enthusiasts who came of age in the 1990’s, but that hasn’t stopped “Breakin’ Combs” from being re-issued not once but TWICE. Of course that doesn’t help crate diggers in North America that much since it was re-issued in JAPAN, but that doesn’t change the fact the album has never officially left circulation. It could return at any time — you “Can’t Hold It Back.”

What causes this album to command such high prices regardless of its availability? Let’s start with the fact that Dred Scott was quite the renaissance man in the era. His album was largely self-produced save for a couple of assists from Tragedy Khadafi, Big Domino and his future wife Adriana Evans. Speaking of Evans, people may be seeking out his album because of her success as a R&B chanteuse, as he’s been involved behind the boards and scenes throughout her career. Reason three may be fondness for the aptly titled single “Back in the Day” and its funky horn break. It’s hip these days to be nostalgic for retro, so this song was 25 years ahead of its time, taking us back even further as Dred reminisces about making it big.

“I was married to the shit like a husband to a wife
But when I tried to rhyme up at the Good Life
Yo I got dissed I couldn’t buy no respect
But in two years I came back to catch wreck
On the set and jet, cause that’s how it had to be
And my man Tragedy became amazed at me
So he put me inside, the Cadillac
The chauffeur drove off, and now I can’t go back”

Who can really? The appeal of Dred Scott was obvious though. In rapping about paying his dues he also paid homage to Run-D.M.C.’s “Sucker M.C.’s” and showed his respect to the pioneers that came before him. Like his production on “Breakin’ Combs,” Dred Scott showed the perfect balance between having one foot firmly planted in history with the other stepping forward toward rap’s future. “From the underground like some fucking buried treasure”, quips Scott on the single “Nutin’ Ta Lose,” passionately articulating his desire to come UP from said underground at any cost.

“Martin Luther didn’t have nothin to lose/Malcolm X didn’t have nothin to lose.” It’s not a subtle statement nor does it need to be, and that fearlessness informs the entirety of the album. “Who the hell said I couldn’t kick the whole kit caboodle?” states Dred on “Rough E Nuff,” with the swagger of a rapper twice his size or reputation. “Oh no! Time to go! Dred Scott just stole your show.” That level of confidence also informed the mellow jazzy cool of songs like “Check the Vibe” with the aforementioned Evans. When you already know you’re dope, that gives you the ability to change things up and know it’s still going to work, even when you cool down your flow and let the music itself breathe a little more.

A quarter century later it’s a little hard for me to fathom how Dred Scott didn’t rocket to rap stardom. If you wanted some hard P-Funk for the trunk he had it on “They Don’t Know.” If it’s hard headed old school influenced verbal battling, “Funky Rhythms” with Tragedy fits the bill. If next level shit was what you were about, “Can’t Hold It Back” was the bleeding edge of 1994. His production and bars on the song are SOLIDLY on point.

“Don’t come around here with the whack flow
I swoop down on niggaz like a black crow
Aww shit! Now it gets scarier
Timberland boots to your genital area
Kick the whole Ku Klux Klan out the South
Nah punk I won’t take the gat out your mouth”

On the real though I want to know what happened to his friend Da Grinch, whose ridiculous level of energy on the song’s last verse might be one of the greatest “one and done” performances in all of rap. I would have bought a whole album from that dude. I’d certainly encourage you to buy the one and only Dred Scott album I know of that came out on anything close to a major label and that’s “Breakin’ Combs.” By his own admission on “Back in the Day” he has a pre-major label catalogue, but that shit’s even more obscure than this, so start where you can — just not at the $200 level.