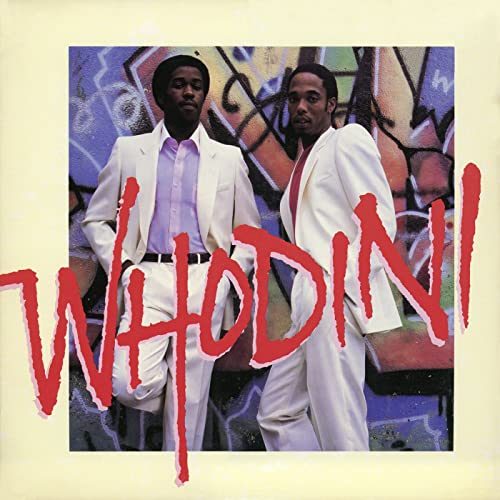 13 years ago I wrote about “Funky Beat” — the compilation album covering the greatest hits of seminal rap group Whodini. With a recording career that spanned two decades (the 1980’s and 90’s) and six albums, one that went platinum and two that went gold, there was plenty of material to mine from their historic career. It’s telling though that the only two songs on the “Greatest Hits” CD come from their self-titled debut album. One was “Magic’s Wand,” a tribute to FM radio’s superstar hip-hop deejay Mr. Magic.

By some accounts this is the first “music video” in rap history, predating the legendary “Rock Box” video from Run-D.M.C., but I strongly disagree with that status. Even though it was originally just a live set on the Soap Factory Disco Show in 1979, Sugarhill Gang’s performance of “Rapper’s Delight” was eventually crowned the “official” music video for the song and thus predates BOTH tracks. Now if you really want to go deep into the cut, “Personality Jock” by Fatback Band featuring King Tim III might have ALL of them beat since that single came out before “Rapper’s Delight” in ’79, but unfortunately I have no authentication of whether the available live performance comes before or after Sugarhill Gang’s. It also doesn’t appear to have ever had traction as a “music video” unlike Sugarhill Gang’s live performance. We’re getting off topic though.

“The Haunted House of Rock” is the other song from “Whodini” to have garnered any lasting presence in pop culture. That’s largely due to the fact Halloween themed hip-hop songs were few and far between, although one could certainly argue Dana Dane’s “Nightmares” (a much better song) fits the bill. Ecstasy, Jalil Hutchins and Grandmaster Dee kick it up to the nth degree here by rapping about “cobwebs hanging over your head/music being played by the Grateful Dead” while name checking vintage horror movie monsters like the Creature from the Black Lagoon and The Invisible Man. It’s the kind of unapologetically cheesy rap that a more snarky person would say is “quintessentially 80’s,” but as a child of the 80’s I can dig it.

I wish I could say the rest of “Whodini” holds up as well as the two songs that got preserved for posterity on their “best of” album, but that’s simply not true. “Yours for a Night” is the ideal example of a Whodini song that’s best forgotten. For inexplicable reasons the rappers dabble in trying to record an upbeat R&B crossover track, and it’s hard to discern whether the singing or the raps are more corny. “It’s the hugging and the squeezing I really miss/Or just the anticipation of yo’ kiss.” Ugh. Producers Willesden Dodgers and Roy Carter really tried to give the song snappy percussion and slinky funk, but all they succeed in doing is making Whodini sound like a parody of New Edition.

As a self-professed fan of Whodini it’s a minor miracle they made it to their smash hit album “Escape” after this debut. While modern albums may have dozens of songs that are only a minute or two long, “Whodini” goes too far in the OTHER direction by having only eight tracks yet still managing to clock in at 44 minutes. That means songs like “Nasty Lady” are stuffed with instrumental filler and ad libs to pad their length, which doesn’t do a poor example of Whodini’s extensive catalogue any favors.

Despite the album’s numerous shortcomings, I can still recommend a few things from it highly. Thomas Dolby’s sequel to “Magic’s Wand” called “It’s All in Mr. Magic’s Wand” takes the charm of the original and condenses it down to a pure 80’s dose of synthesizers and kick drums. You should also check out “Rap Machine” — it’s not a great song musically, but lyrically you can hear hints of “Five Minutes of Funk” and “Freaks Come Out at Night” in it. The song at least hints at Whodini’s potential while failing to achieve it.

After praising Whodini’s role in rap’s ascension to the mainstream in the 1980’s, it pains me to say their first album isn’t that good. It’s value as a part of their legacy and as a launching pad for the heights they’d later achieve can’t be dismissed, but it’s not a record that easily demands repeated listens. If you own “Funky Beat” you can skip it because you already have the best of what this album can offer. For curiosity seekers or those nostalgic for very early 1980’s hip-hop though, it’s unquestionably a slice cut straight from the era, just not one that’s very even or easy to digest.