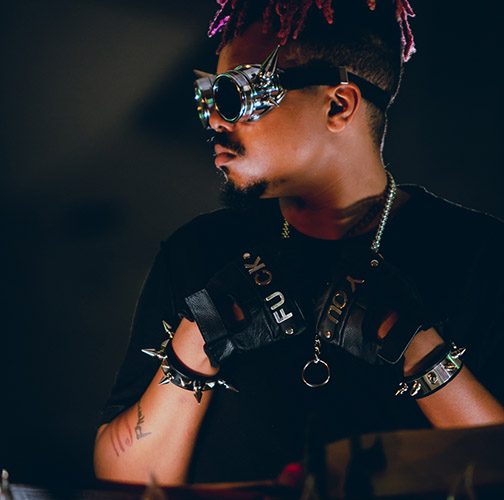 Music should be felt on a level deeper than superficial bars. Meech Mercury’s new single “Needed More,” is the purest form of music.

Born Demetrious Dabadee, but to the music world, he became known as the artist Meech Mercury. His name itself is a representation of who he is as an artist. Rooted in the philosophy of astrology, his name came to be from his sign. Being Gemini, its assigned planet is the first one in the solar system, Mercury. Dabadee felt a deep connection with this planet as his research brought enlightenment to its many attributes, blazing hot days, and freezing cold nights. The planet embodies passion in its purest form and in extension, the word mercurial derived from its base describes a person prone to strong and sudden shifts in their mood. Dabadee embodies this at his core, both within himself and his music. Dabadee couldn’t help but adopt the word into his alias, and just like it, he too is sleek and beautiful to look at, but a deadly poison to humans. A heart good with intent but can be too real for the world to comprehend.

Meech Mercury calls the world his home as his place of stay varies as time progresses, but his childhood and teenage years were spent between the streets of Chicago and the city of Atlanta. Throughout his life, trauma and depression has been a daily struggle for the artist, and music became his outlet not only to free himself from all that was brewing within him, but to speak to those experiencing emotional and mental distress behind the smiles and put together appearance.

Music was his escape from all he felt inside, listening to songs from his favorite artists, but often times he felt passion was lacking within their composition. That’s when Meech Mercury became, and the artist he has evolved into, has built up a strong following. His music was birthed in order to express his pain and heal, stopping the misguided diagnosis of those not able to understand all that he felt. Meech Mercury is unlike any artist currently in the mainstream era. He bridges the gap between music that simply sounds good to the ear, and music that resonates and touches the listener. Few in the industry hold the artistic creativity and depth of Meech Mercury’s music. Two of his main influences that shaped the course of hip-hop are Kanye West and Kid Cudi. His music is a culmination of the two, creative and outside the box, able to blend and fuse genres, and drenched in emotion and realism.

Meech Mercury aims not only to attain the same level and status as those that inspire him, but to surpass where they have since reached, and his music is on course to make this possible. Able to pour all of his emotions and experiences from life into his songs, he becomes a person of passion when in the studio. It is his place where creativity flows forth and captures his freshest and rawest music. His mantra comes from legendary rapper Andre 3000, “I do think when you think too much you’re removing what’s moving.”

As his journey as an artist grows the more his fanbase expands, Meech Mercury still finds himself struggling with his intense depression and fighting to maintain his sanity and not let his feelings take control. It’s a haunting truth, that musical geniuses hold the most chaos within them, but it is from this place that timeless music finds itself, and Meech Mercury is one of those geniuses. However deeply attached to pain and depression his music is, Mercury also believes that greatness can also become from positive things like love and happiness and the truest art that can be created comes from passion.

With the release of his new single and music video “Needed More” upcoming on November 18th, fans can expect Meech Mercury in his most artistic self. The new release is unlike anything the industry has heard before, using his unique talent of merging sounds and creating something fresh to the culture that inspires and speaks to the conscience and heart. It is without a doubt a song that comes from a sacred place within Meech Mercury. His passion and feelings leak into the upbeat yet melancholy instrumental with bar schemes and lyricism speaking his truth. The track is like a fluent orchestra, each part complimenting the other to make “Needed More” something different, yet hits deep. Melodies change throughout the interaction of the beat, as Meech Mercury spills his very soul in hopes of connecting with those needing an outlet in a dark place. The words are relatable, based off real life, not simply a combination of lyrics. The music video accompanying the release deserves all the praise that will be forthcoming when it drops. Stunning visuals with scenes equally deep in meaning, which makes a great match for the song and enhances its impact. Produced by Group One Two Nine LLC and directed by Arma Benoit “Needed More” is about to shake up the game. The single will continue to carve Mercury as a goat in the industry with music that spreads across all spectrums of emotion, taking listeners on a wild ride of creativity and emotion.

Meech Mercury is one that can find himself lost within his honesty, too real for the fake and with too much expression for those scared of truly feeling. His music is more than just a career path, but the language of his soul. As his new single “Needed more” approaches, Mercury hopes its sound will help in shifting the paradigm of hip-hop, breaking the one dimensional labels placed on the genre, and letting it breathe as it should. Mercury is a voice that fights for hip-hop to not be boxed into just that, but allow the many sub-genres to also be rightly expressed and have their own lane.

Meech Mercury is about to bring change to the industry with his track record of releases and “Needed More” is sure to be the next step in exceeding all expectations. His journey has its storms, but it has given rise to a great artist and continues to mold a legend. Stay locked in for his new single “Needed More.” If real music, raw, passionate, and trendy is your forte, then “Needed More” is exactly what you’ve been waiting for. Follow his career, stream his music, and look out for the upcoming single via the links: