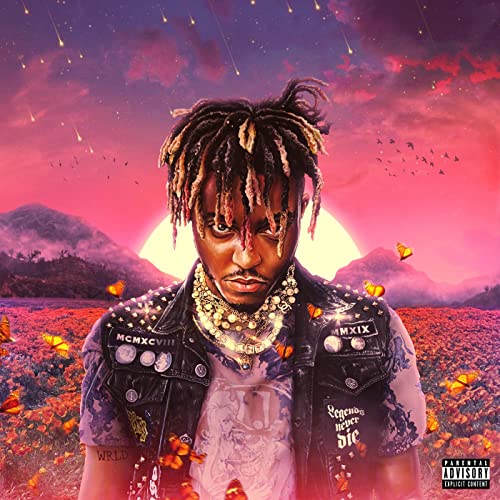 It has been almost a year since Jarad Anthony Higgins passed away at only 21 years old. The posthumous release of “Legends Never Die” on July 10th raised a lot of awkward questions I’ve not been comfortable with tackling until now, but I’m finally ready to sit here and talk to you all about it. If you’d rather skip ahead to the meat and potatoes of the review then you can scroll a little past the three embedded videos from the album, the first of which is an official video for “Righteous” released on April 23rd, 2020.

Much like posthumous Tupac Shakur clips the formula for making a video from a no longer available artist is pretty straightforward — random B-roll from their various appearances, along with animated footage to pad out the length as needed. This raises the first uncomfortable question we need to address — is it shamelessly exploitative to put out an album of an artist’s unreleased material after their death let alone make a video to support it? Yes. Neither left any children behind as heirs to their estate (that we know of), but Pac’s mother was the administrator for his and tried to use it for good until shortly before her own death. Perhaps Mr. Higgins’ mother will do the same thing, but we all know the majority of the profits (in both cases actually) goes to Interscope Records. Labels don’t become powerhouses by giving the lion’s share of anything to the artists. Signing with a major is always a devil’s bargain. You get a good advance, you get a budget for your video, you get their marketing machine and if you sell enough units that small share of the profits still makes you rich — but it makes them richer.

The second issue raised by “Legends Never Die” is due to the title of the album itself. Since I’ve already raised the Shakur comparison and noted the Interscope Records coincidence, let’s address that right now by noting that 2Pac had four studio albums before his death. It’s not a huge catalogue especially compared to the numerous posthumous released that followed, but at 25 years old he had become one of the largest rap stars in the world before his demise. Chart topping singles, million dollar videos, well publicized beefs with other rappers, a flourishing acting career in major motion pictures, constant drama and numerous failed shooting attempts were all part of his short, turbulent, and highly visible recording career. Can Jarad Higgins say the same after three studio albums and numerous mixtapes before his death? No. He might have been on the way TO being a legend, but his work emphasized style over substance to a degree Shakur’s never did. Shakur may have been an accidental political activist compared to his famous Black Panther mother, but her influence is still felt in the strident convictions displayed throughout his catalogue.

It’s curious that “Life’s a Mess” hints at a chance for Juice WRLD to address deeper subjects but fails to deliver. It could have been a song to talk about systemic racism, police brutality, the exploitation of rap artists, religious and gender discrimination, and economic inequalities that have only been exacerbated by a pandemic he fortunately didn’t live to experience. Instead Mr. Higgins is defined in the song by the same things that ultimately shortened his life. “Ahh sometimes life’s a mess — I get high when I’m upset.” Instead of tackling the things that bring him emotional pain, he looks for a medicinal remedy. Halsey makes a cameo to sing along with him and echo his words, but as an admittedly bipolar “messed up” individual herself, she is incredibly open about her issues in interviews in a way that seems… HEALTHY. She’s not wallowing in drug abuse to hide from her demons. Meanwhile Mr. Higgins speaks to us from beyond the grave on “Come & Go,” stating “We take drugs/then you hold me close/then I tell you how you make me whole.” You couldn’t tell your partner without getting high first? C’mon son.

It would be easy to say “that’s just his persona” and separate the character of Juice WRLD from the real life Mr. Higgins, but he died from an overdose of oxycodone and codeine, so it’s not very evident he drew any distinction between himself as a rapper and as a person. In his brief time on this Earth, Tupac Shakur clearly knew when to “turn it on” and when to go back to being a regular guy. He had an image to maintain as one of the most (in)famous rappers alive, but countless stories of how quiet, thoughtful and caring when he wasn’t in the spotlight exist. There was 2Pac the rapper and Tupac Shakur the person. And yes given his legal and criminal problems Shakur was not a perfect man nor an ideal role model, but we can say one thing for sure about both men — they died too young before we really got to know them at their very best.

“Legends Never Die” is not what I would call an aptly titled album, and not just because Jarad Higgins didn’t live long enough to become a legend, but because all legends die. In 2020 everyone from Chadwick Boseman to Sean Connery to Ruth Bader Ginsberg passed away. Death spares no one. We all live, we all die, and it’s the curse of human existence to be acutely aware of one’s own mortality. The strange truth of this nearly hour long album is that it may MAKE him a legend, as will future posthumous releases, as human beings have the funny tendency to celebrate people more after they’ve died than while they lived. Songs like “Wishing Well” carry on the things that made him popular — a catchy melody and hook, AutoTuned lyrics, tales of depression and drug use. All of Juice WRLD’s trademarks can be found here and will undoubtedly continue until Interscope has squeezed the last drop of blood out of his catalogue. They’ll make a legend of him in the end.