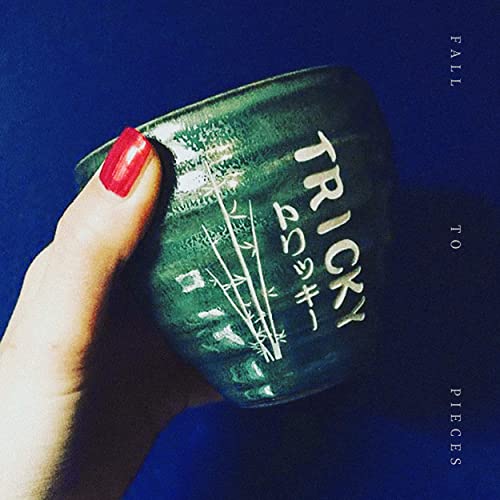 “Fall to Pieces,” British rapper Tricky’s 14th album, came out in the aftermath of his daughter’s death by suicide in 2019. His grief over her death weighs heavily on the album, resulting in an album that is both beautiful and heartbreaking.

Tricky albums have always depended on collaborations with strong female singers, and “Fall to Pieces” features two: Polish singer Marta Zlakowska (on 9 of the tracks) and Danish singer Oh Land (on 2). In fact, Tricky’s asthmatic croak is barely present on the album. I only counted four tracks with his vocals. As a result, the album is more beautiful than his previous work because, even when it musically hews close to the claustrophobic sound he is known for, the female vocalists open the songs up.

Album opener “Thinking Of” has dour synths, but Marta Zlakowska’s voice gives the sad lyrics (“Is it real?/Hurts to feel/Goodnight my love”) a sense of wistfulness that they might not have had in Tricky’s hands. Not that Marta trivializes the music; she sounds heartbroken on “Throws Me Around,” and haunted on “Take Me Shopping.” Still, like Marina Topley-Bird did on earlier records, Marta adds a much needed foil to the sometimes oppressive weight of Tricky’s music.

There are also many tracks on the album that go in a more musical and even pop direction than what I typically associate with Tricky. In interviews he calls “Fall Please” his first real pop song, with its danceable beat and catchy chorus. It is still recognizably Tricky, but definitely more upbeat than we usually get from him. Both of Oh Land’s songs are beautiful, folk-tinged tracks that incorporate Eastern European music to good results.

The lightness of Marta and Oh Land’s vocals keeps “Fall to Pieces” from being too overwhelmingly sad. Tricky’s grief is all over the album, although mostly referenced obliquely. There are lyrics about how there is nothing else anymore, how he feels like a stone, and, in a lyrical theme that has been a constant throughout his career, how he can hardly breathe. He also tackles his grief directly. On “Close Now” Marta sings, “Hardly sleep now/Hardly here now/State into space/Ending this race.”

The real gut punch is “Hate This Pain.” Over a bluesy piano riff, Tricky continues to croak, “I hate this fucking pain” while Marta joins in. It is a powerful encapsulation of despair, and a challenging song to listen to.

I’ve had this album on steady rotation since it was released in September. To me, it is the perfect soundtrack for live under COVID. It is claustrophobic, depressing, but also beautiful in its own sad way. While the circumstances that led to “Fall to Pieces” are terrible, the album is incredible. I only hope that the inspiration for Tricky’s next album are less tragic.