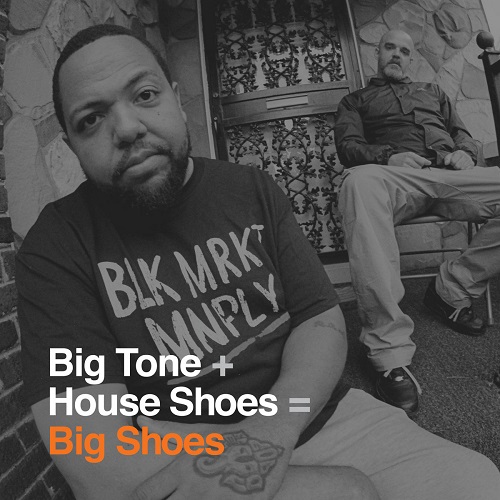 The truly remarkable thing about Apollo Brown’s “Sincerely, Detroit” is its competitive spirit. A conference of 50+ MC’s from one city, all giving their best possible performance (to the best of their current ability), competing with each other in time-honored hip-hop tradition. You don’t have to be a pessimist to find yourself among those who never thought they’d live to witness something like that again (at least outside of the fantasy battle rap league going down in the comments section of your preferred online platform). Perhaps host Apollo Brown set the guidelines accordingly, or maybe it’s just the genius loci of the Detroit hip-hop scene.

The sad truth however is that the attention that such a record attracts doesn’t have much of a lasting effect outside of the city limits. How many listeners followed up on any of the rappers featured on “Sincerely, Detroit”? That’s why we give you our – slightly belated – take on “Big Shoes”, if you will the bipartite version of Detroit representatives joining forces.

“Big Shoes” had been at least seven years in the making. Though residing in the Golden State, House Shoes’s name is still very much associated with the D. He’s worked with some of the most notable Detroit rappers of the last twenty years, he’s been featured on Dilla tributes, he connected his old and his new home on “Let it Go” from 2012, and so “Big Shoes” reunites two of Detroit’s sons for a record that is inspired by the virtues and the pitfalls of a local scene.

Frequently adopting the retrospective, the project is framed by an opener that brings you up to speed with the rapper’s career and a closer that recounts the creation of “Big Shoes”. “Autobiography” starts with Big Tone’s first steps in creating hip-hop, from rapping over “instrumentals acquired from Aspen Records, any tape I could purchase that had one” to eventually beginning to make his own beats, notably with the help of “[House] Shoes’ MPC and his records”. By recapping his own history the “Hip-Hop Shop kid [who] made some fruitful moves” also sets off a gallery of the characters and locations of the aforementioned Detroit hip-hop scene, all the while giving us a hint of the significance he has for his hometown.

“Homage” tallies up the dues these two paid even more accurately as Big Tone credits House Shoes for taking local records beyond city limits while touring, and asks rhetorically, “Where would the scene be without a Shoes House for chillin’?” Meanwhile the MC analyzes his own standing with thought associations like “I’m a blueprint writer / for dudes you kids mighta / heard of, then got inspired to do shit like him” and “I didn’t appreciate havin’ to do it my way / till I realized how many can’t adapt and do it my way”.

Big Tone is a rapper that tries to get behind his own mystique – and in doing so conveniently establishes that he has one – much in the tradition of the later ’80s classics. There are layers to his writing. “High Velocity Pt 1 & 2” isn’t just about him navigating traffic and the potential metaphors you can pack in there, it’s a musical excercise in how to execute such a concept. This is rap music that consists of more than mere allegations in whatever tone and vocal that are currently in style. First House Shoes mangles organs and rock guitars and whips them into shape with hard drums, then he creates a moment of both relaxation and anticipation that only unwinds when the chequered flag is waved.

It is a matter of course that a veteran artist would talk about lessons learned. On “No Guest List” him and Quelle Chris emphasize the importance of mutual local support and the system of paying dues. On “King Shit” (with Denmark Vessey and MosEL) he discusses the ramifications of making mistakes when you’re a role model – but also comes to the conclusion to have finally “figured out how to put this education to use”. “Exodus (Fly Away)” shows him hesitant to fly the coop, weighing advice from the well-traveled Guilty Simpson against the fear of leaving his hard-earned position at home vacant.

But it’s not all existential anxiety. “Beautiful Mind” features Blu, a fellow rapper who has tried to spread the word about Big Tone. (House Shoes as quoted on the album cover sticker: ‘When I met Blu for the first time, he told me Tone was his favorite rapper’.) Contrary to the general tone you hear from rappers who achieve some level of stardom and are quick to fire back at so-called haters, “Big Shoes” is free of such rancor. Big Tone is just “humbled by the fact that people recognize my mission”.

All of this is perhaps not terribly relevant to folks outside of Detroit hip-hop. Still a gifted MC can shine in any situation. Which Big Tone does in the first three tracks, which include “From My Mouth to Gods Ears”, a dense deliberation on religion that quickly takes a socio-political turn, all in a language that is as lyrical as it is rational. In any given rap period you don’t see too many rhyme writers with that much verbal skill.

The power of narration is sometimes such that in can overshadow reality. Last month, a distinguished website praised Michigan (mainly Detroit and Flint) for having the ‘most exciting’ regional rap scene in 2020. We shouldn’t be surprised that the article didn’t revolve around the cast of “Sincerely, Detroit” and “Big Shoes” (which both dropped in 2019, but that’s besides the point). Apart from the generational gap (which automatically prevents that older artists can be perceived as ‘exciting’), everyone tells their own story. House Shoes and Big Tone tell theirs on “Big Shoes”, and if closer “True Story”, essentially a making-of, sounds almost better than the real thing, then that speaks to Tone’s ability to interpret things in his favor. Even so, he’s intent on bridging gaps with “rhymes not barren of responsibility to mould the young” (“Most of Us”).

Even when “Big Shoes” can’t keep up with its opening (and closing) sequence, it stills packs grandiose tunes in the middle section such as “Homage” and “Most of Us”, which individualy happen to illustrate the rapper’s range between calm, conversational tone and a more energetic flow. Back in 2005 Tone quipped, “Sometimes I get scared of my prime / You mean I just might get better with time?” For MC’s of his generation, originality has always been half the battle. But if the topic is skills, they have always been there, going back to his first tape as Hodge Podge. What hasn’t been there as consistently is Big Tone himself. It would be unfortunate if “Big Shoes” would remain another sporadic vital sign that – faintly enough – beams beyond Detroit’s city limits.