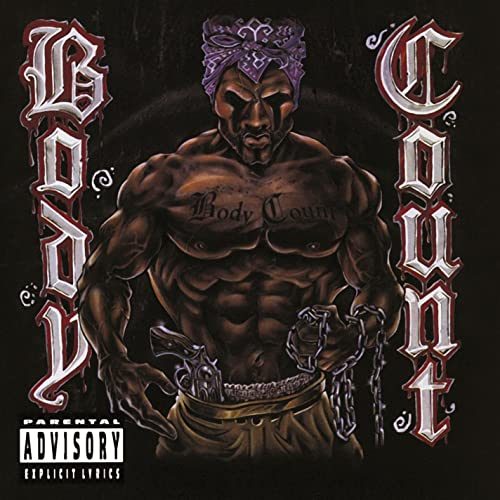 Long before the Streisand effect even existed, there was Body Count. The idea of one of my favorite rappers launching a heavy metal band was only mildly intriguing to me at the time. I was still in high school at the time, I didn’t have any friends who listened to metal until college, so my only thought at the time was “That’s interesting. I hope it goes well for him.” That would have been the end of it until the album’s final track “Cop Killer” unleashed a shit-storm of controversy.

Released on March 10, 1992, the self-titled “Body Count” album came after after the Rodney King assault and just before the Los Angeles riots sparked by the acquittal of the officers who savagely beat him. “Cop Killer” was a timely expression of the anger bubbling just beneath the surface that would inevitably boil over. It wasn’t unique in its sentiments. N.W.A.’s “Fuck Tha Police” had expressed similar outrage at police brutality four years earlier, and frustration with law enforcement can be heard all through rap’s history, but the song’s title and refrain of “Cop Killer! Better you than me” caused white America to lose their damn minds. Instead of trying to understand his message, they turned Ice-T and his band into a scapegoat.

In the wake of calls for “Body Count” to be banned or censored, complete with over the top stunts like Charlton Heston reading lyrics from the album at a Time-Warner shareholders meeting, my interest in Ice-T’s side project went from “eh” to “Oh shit! I gotta have it.” Rumors spread like wildfire that at any moment stores would pull every copy, and a friend of mine became so obsessed that he drove 20 miles to the nearest record store and bought “the last copy.” Initially I presumed he was playing it up like “Look at how cool I am for this rare thing I have” but he was right. The next week “Body Count” was GONE. When I eventually found a copy a few months later it was a brand new version of the album where “Cop Killer” had been replaced with a new version of Ice-T’s song “Freedom of Speech.”

“Hey PMRC, you stupid fucking assholes/The sticker on the record, is what it makes it sell gold/Can’t you see, you alcoholic idiots?/The more you try to suppress us, the larger we get.” The song thus becomes a middle finger to America for having to remove “Cop Killer” in the first place, and Ice-T’s point was proven correct by how heavily bootlegged the aforementioned “last copy” was. I daresay that even in rural America where I lived, every kid knew the words to “Cop Killer” and could sing along to the whole song. The controversy only made “Body Count” more popular, and withdrawing the album to re-release it only increased interest MORE. The record label certainly wasn’t ignorant to this as “Cop Killer” was issued as a promotional single even though it was removed from its original album. Talk about trying to have it both ways.

In short a young Flash got his first exposure to the “Streisand effect” thanks to a bunch of uptight moralizing Christian do-gooders and angry cops who “felt threatened” by the song’s message. A side project from Ice-T that meant nothing to me when it first dropped suddenly became a huge deal that decades after the fact is still permanently lodged in my brain. Does the rest of the album hold up though? That’s debatable. From “Body Count’s in the House” on the limitations of the concept are immediately evident. Since Ice-T is not a singer, he merely recites the title of the song over and over again until he ultimately introduces all of the members of his band.

The titular track of the album is a re-release from “O.G. Original Gangster” and was just about as good as the concept could get. Guitarist Ernie C and the rest of the crew made heavy metal and Ice-T talked over it. Historians have retrospectively tried to brand it “the birth of nu-metal” and I think that’s a stretch, but it would be fair to say Ice-T was ahead of his time. In fact he was so far ahead of his time that once he gave birth to the idea no one was quite sure what to do with their newborn genre. The whole album sounds like a musical experiment, and tracks like “Voodoo” find Ice-T trying to recast himself as a singer, but he skews closer to death metal minus the growl. Ultimately he winds up performing spoken word horrorcore poetry.

The closest the album gets to merging the elements is on “KKK Bitch,” the very song Heston read at the shareholders meeting. Ice-T gets himself into a groove that’s eerily reminiscent of Primus, whose lead singer Les Claypool often sound like he was “rapping” on their most popular tracks from the era. The song is a hilarious take on sexuality with Ice-T vowing “If you’re from Mars and you’ve got a pussy, we’ll fuck you.” The vulgar humor is secondary to Ice-T’s unique form of revenge on the racist parts of the South — impregnating the daughters of Klan wizards until “little Ice-T’s” pop out.

It’s also worth noting that all of the controversy stirred up by “Cop Killer” and all of the focus put on Ice-T as a result overshadowed the members of the band. As “C Note” proves to listeners, Ernie C was a skilled guitarist who could have easily lead any heavy metal band, but his friendship with Ice-T ultimately put him in this position for either better or worse.

“Body Count” is an important album, but that should not be mistaken for it being conflated to be a great album. The swirling tide of history that swept the group’s debut along before and after its release make it ironic that Ice-T found his biggest success as an actor playing Detective Tutuola on Law & Order: SVU. He’s damn good at it too. In fact he’s a better actor playing a cop than he is a rapper playing a heavy metal frontman. It’s not a bad album if you like heavy metal, but there are so many better albums in the same genre, and Ice-T winds up overshadowed by his own history as a rap artist as a result.