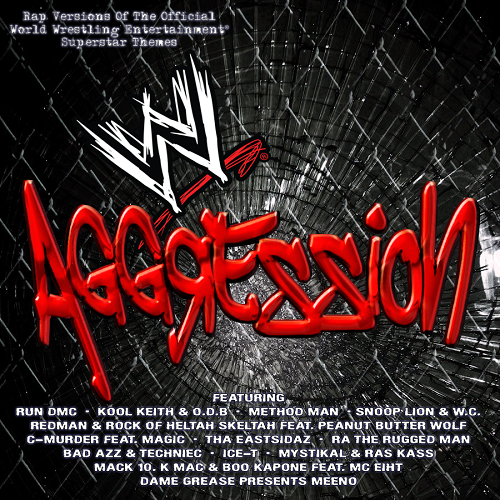 Can you smell what The Rock is COOKIN’?

Don’t worry, you don’t have to be a fan of the “Smackdown” to appreciate this album (witcha jabroni candy ass). The lyrical mayhem of an all-star roster of rap’s finest (including Method Man, Ras Kass, Run-D.M.C., Tha Eastsidaz, and even RA the Rugged Man) holds it down nicely for two genres that would have seemed anathema to each other before Redman and Method Man’s video for “Tear it Off.”

Starting this album off nicely is a new track by Run-D.M.C. (mostly just Run these days) for the wrestlers D-Generation X. Appropriately called “The Kings,” this is one of the most hard-rocking raps been heard out of Hollis, Queens in a LONG time. I challenge you NOT not to Slam like Onyx when you listen to this track. Mankind’s theme “Wreck” will appeal to those hip-hop heads who like psychotic rap – as Ol’ Dirty Bastard and Kool Keith combine for the kind of rhymes only two people who’ve spent time in mental wards could kick. Really, the track sounds like a leftover from Keith’s “Black Elvis” album – so you’ll either love it or hate it depending on how you feel about that style. Personally, it’s a thumbs up.

The first single “Know Your Role” is The Rock’s theme, arguably the most popular wrestler in the WWF right now (he’s the one you see in all the video game commercials). Method Man was the ideal choice for his rap, as he mixes Shaolin slang with wrestling jargon like a pro and comes off like a lifelong fan of the art (or should I say testosterone soap opera). Now let’s see Master P’s cronies in the WCW mix it up with the Wu-Tang Clan in a battle royale – that would be BOUT IT BOUT IT!

Part time “Celebrity Deathmatch” guest star Stone Cold Steve Austin’s theme is up next, as hosted by Snoop Dogg and W.C. While the track is chunky and Dub in particular is pumped up on adrenaline, it almost sounds mismatched. These Westsyyyders are putting in their work for WWF but really flow better to G-funk than this chunky rock. Better matched are Redman and Rock (of Heltah Skeltah) to the Peanut Butter Wolf produced “No Chance” – this actually being the theme of WWF owner Vince McMahon. I guess it’s no surprise this borderline bad guy in WWF’s continuing drama would reserve two of rap’s hardest for his own personal theme – and it works. This piano and plucky strings driven track works on an illyest level with Rock driving down a strong reminder WHY you should never sleep on Boot Camp Clik – “I only got one felony, I can stick you TWICE!”

Gangrel’s theme “I Won’t Stop” is mostly forgettable. Neither C-Murder or Magic can add anything to this lackluster track about a wrestler “straight out of hell”. Kane’s theme by Tha Eastsidaz though “Big Red Machine” is positively creepy – everything that Gangrel’s rap shoulda been. This one should give you big cold chills! And to make matters better, the normally annoying “fat hairy unshaven” RA the Rugged Man sounds viciously appropriate on Chris Jericho’s “Break Down the Walls.” His start/stop, horrorcore flow actually matches near perfectly with the slow beat and the WWF machismo. “My mother doesn’t trust me,” muses RA. Don’t worry Dunn, if she heard this, I wouldn’t either!

Somebody should have told Bad Azz and Techniec to stay away from beats that sound like third generation “Another One Bites the Dust” because even if you don’t think Vanilla Ice, you’ll still not find New Age Outlaw’s theme very interesting (I guess it doesn’t help both rappers are seminal unknowns). Ice-T fares better on the year 2000 update of Big Daddy Kane’s “Pimpin’ Ain’t Easy” – it’s not better than the original but it shows that Ice-T is still capable of kicking rhymes with flair. This old school rap legend does The Godfather proud.

Closing out the album are three hardcore bangers: Mystikal and Ras Kass’ “Game” theme for Triple H (this one’s a sure shot), Mack 10’s “The Big Show” with Boo Kapone, K Mac, and MC Eiht (it’s a rowdy rocking, bar brawling, hoo-bangin anthem) and last but not least Undertaker’s theme “Ministry” as performed by Dame Grease and Meeno (a good beat with two rappers I have no interest in at all). That’s a surprisingly impressive 11 out of 13 very good or better tracks on a compilation I wasn’t even checking for. So why don’t these rappers show up on WWF sometime to PERFORM these themes? I betcha rooty poot ass that I’d tune in!