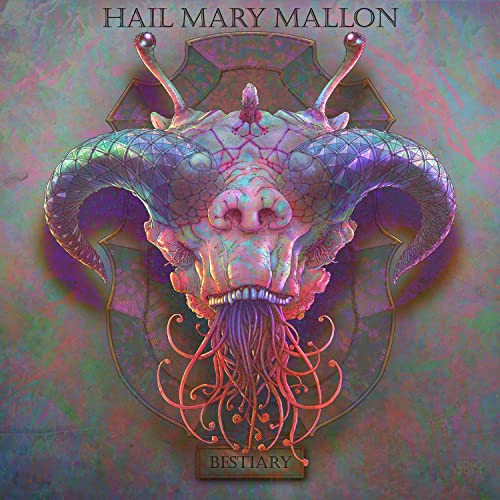 Have you heard the Undertale remix of Hail Mary Mallon’s “Whales” before? If not check this out.

Even though I should have checked out HMM’s sophomore (and apparently final) album “Bestiary” long before the remix, the humorous mash-up of hip-hop with Toby Fox’s non-traditional RPG gave me a much needed kick in the butt to get around to it. For those who don’t know them, HMM is a collaboration between Aesop Rock, Rob Sonic and DJ Big Wiz that resulted in the well received release “Are You Gonna Eat That?” in 2011. One might wonder if that kind of creative lightning could be caught in a bottle more than once, which might be why it took them four years to release the follow up — and why they’ve teased it might be the last one. In the meantime though we’ve got songs like “Used Cars” to jam on.

If you heard the song without knowing the name you might think it was called “Oh Shit!” given how often both rappers say it and how expertly Big Wiz scratches the same line. The versatile artists pull double duty rapping and producing, and the song reflects their skills both individually and collectively quite well. If you’re not familiar with either of the above tracks though you might have come across “4AM” at least once. The entire clip for the video is shot in black and white and features a bunch of skateboarders performing tricks seemingly in the dead of night. The streets are as eerily empty then as they might be now thanks to stay-at-home lockdown orders.

“Whales” was the breakout song for “Bestiary” though and coincidentally perfect for the would-be remix maker. It’s a stripped down old school style rap with nothing more than a beat, two emcees and a deejay doing their thang. Aesop and Rob trade increasingly ludicrous braggadocious bars about how they flaunt their wealth, spoofing conspicuous consumption with lines like “Money is a motherfucking joke, 40 bald eagles sewn into a coat.” If the words alone don’t make you laugh, the original video absolutely nails the comedy of it all through the art of puppetry.

Pairing visuals with the audio was obviously a key point of emphasis for Hail Mary Mallon, as no song with a video fails to deliver. In fact they OVER deliver, which may ironically be part of what keeps them from reuniting for a third album. The time and expense that goes into filming and editing clips like “Jonathan” has to weigh heavily on the group. No matter how critically acclaimed your music is, it costs money to make music and even more to make music VIDEOS, and if you can’t recoup it then it’s art for art’s sake.

Buying a copy of “Bestiary” because you feel bad for them though would be a waste of time. Aesop Rock and Rob Sonic are both doing just fine, having no shortage of singles, albums and collaborations with other people in their respective discographies. You should buy “Bestiary” for songs like “Octoberfest.” There’s no video for this one, so feel free to make your own. It’s a deep dense source wall of audio and lyricism that you’ll try and fail to break through. If you’re not frozen to it, you’ll be able to stand back and admire it for its colossal sound and rhymes.

Rob: “Let me clear my name and bury
This hatchet in your caged canary
With a cape and hair piece Buenos Aires
like ‘Collect call for Agent Clarice'”

Aesop: “This year Halloween fell on a weekend
Vacate shells in a heat lamp
Free man teeth on a five finger meal plan
Knight might go Sistine with his free hand”

For me it might be the ideal example of what Hail Mary Mallon is about. They aren’t just uncompromising in their music — they’re adamantly adamanitum-ly unable to be broken by the industry they’re a part of. Anything they want to do, any way they want to do it, that’s what they do. From the hypnotic bass and scratched hooks of “Hang Ten” to the video game stylings of “King Cone” and the delicious deejaying and bars of “The Soup,” it’s all “winner winner TV dinner” for this crew. The only sticking point for some people might be Aesop Rock’s delivery — it always has been and always will be an acquired taste. If you like it, you’ll love it. If you hate it, you’ll never want to hear more of it. I acquired the taste 20+ years ago so for me “Bestiary” is a great album, but that’s just as much a credit to Rob Sonic for being his perfect partner in c/rhyme.