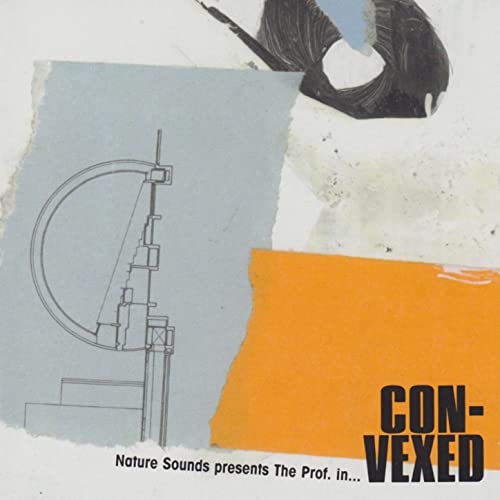 “I’ll prove that I’m the greatest sound man of all time!”

The title of this compilation is so long and unnecessary that I’m going to refer to this album as “Convexed” whenever it comes up. Nature Sounds released “Convexed” back in 2003 as a showcase of artists affiliated with the record label, the same year that Devin Horwitz a/k/a Dev 1 brought the label into existence. Given how new they were on the scene I think it’s likely most people missed this compilation at the time, and given we’re only now reviewing it in 2021, RapReviews.com obviously missed it too. It’s now gained a measure of prominence with the passing of Daniel Dumile as a couple of otherwise obscure MF DOOM songs can be found here.

While “Bells of DOOM” is the most interesting of the two thanks to the pop culture audio snippets, I’ve always preferred the morose and heavy handed “All Outta Ale.” The piano samples are from the far left end of the ivories and sound appropriately dank, creating an atmosphere that Dumile puts into words beautifully: “All this trouble for a tall glass of Olde E/drink it all fast, make you haul ass slowly/Remind me to remember what you told me.” From my own memories of drinking it in my 20’s, the ones the alcohol didn’t burn into oblivion, that’s just about right. One bottle could leave me on the ground trying to stop the room from spinning around. You could go from “feeling a buzz” to “totally fucked up” in a heartbeat.

The sad thing about “Convexed” is that there’s more than one emcee on it who is no longer with us. “I’ll see you in a hell with a bucket of ice/you bitch ass niggas can’t fuck with my +Price+” raps the late Sean P!! on “Come on Now,” an unlikely duet with Mr. Eon from The High & Mighty. I’m a fan of Eon’s stilted delivery, but he can’t hold a charisma to Ruck’s charisma on the track. “Slugs missed you, oh shit your lady died/in the side of her ride like she Lady Di/Ain’t no telling what the Ruck can say, Ruck can do/Ruck with her, Ruck with who/Listen that’s the, reason why I don’t fuck with you.” It’s P at the prime of his flow before things changed in the 21st century. Another sleeper classic is “Numb (to the Guns)” from Aesop Rock.

“Playing marbles/hit by a bus/Death is sweet/hell sucks!” There are hidden depths to the beat and the rhymes, each of which have new layers that I pick up with repeated listens. Getting back to Dumile for a moment though, I think fans of the track “Potholderz” will be pleasantly surprised by Count Bass D’s inclusion “Dro Grown.” It’s even got a verse about dining for the “MM… Food?” fans, although that isn’t terribly surprising to me given the first song I ever heard from D was a single called “Sandwiches.”

“Convexed” is an album that unintentionally became a time capsule. It sounds like the best of underground independent hip-hop music circa 2003. It’s like an archeologist dug through the layers of rap and discovered this section perfectly in tact. The Pharcyde’s Bootie Brown has a sweet solo track called “I Smoke.” Surly nasal rapper Cage devotes a song to where he hails from on “Middletown, NY.” Cannibal Ox challenges you to “Handle That,” while Young Brook leaves me perplexed we didn’t get more of him in the 2000’s even though he wraps the album up with (appropriately enough) a track called “Aloha.”

The confusing conundrum I’m left with is that “Convexed” is both essential and irrelevant at the same time. Nothing found here is bad, and in fact most of is QUITE good, but I think there’s another reason it slipped under the radar beyond the fact Nature Sounds was new on the block. Most compilations have a break out song that makes you go “I need to cop it just for that — I hope the rest is good.” I don’t think anything here reached that critical mass where people needed to rush out to the store to get it. The good news is that “Convexed” has aged incredibly well, making it sound better and more interesting than it did at the time of its release.