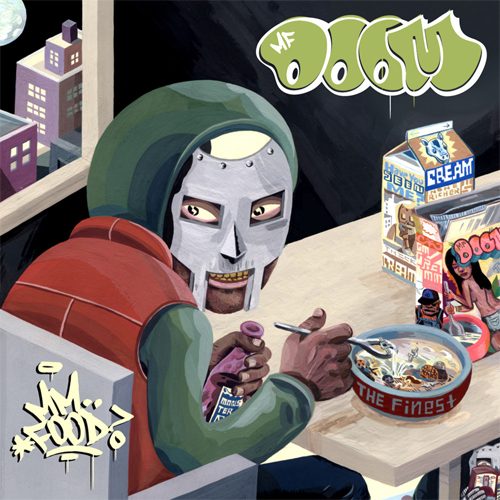 Of all the bizarre developments that have taken place in a highly strange year (the return of Lord Have Mercy, the return of a svelte Heavy D on Bad Boy, Kwame producing for Lloyd Banks, etc.), perhaps none is as bewildering as the ascending star of Daniel Dumile, more popularly known to geeky rap enthusiasts as Metal Fingers Doom. If you’ve been down with rap’s most eccentric antihero for as long as I have, you remember the anguish you had to endure when everybody thought MF Doom was a joke, when “Operation: Doomsday” was unquestionably the most outlandish and adventurous release on a Fondle ‘Em label that had already set standards in artistic creativity. How times have changed — the metal-faced villain now finds himself on the shortlist of every self-respecting, retro Nike-wearing rap elitist, recognised as the standard of good taste amongst legions of dedicated acolytes. Few underground rappers command a cult following that is as feverish or rabid as Doom, whose prolific output, obscure references to popular Americana and fascinatingly left field delivery has elevated him to a messianic, iconic status. If you’re a Doom fan, you know all too well how overdue this collection is, a food-themed record that was originally supposed to be a collaboration between The Professor and the Villain, but has since morphed into an off-kilter solo project with his new label, Rhymesayers.

What should be immediately apparent to a lot of cult initiates is the age of some of the tracks on offer –“Hoe Cakes” has existed for a while now as another incarnation — “Super.” Meanwhile, several tracks have either appeared on the Nature Sounds “Convexed” compilation, the Shaman Work compilation or the instrumental “Special Herbs” series. Additionally, the instrumental from his collaboration with Vast Aire, “Da Supafriendz” sees a rehash as “Poo-Putt Platter.” Herein lies the fundamental flaw of this record, a stigma that has trailed Doom his entire career- while “One Beer,” “Hoe Cakes,” “Guinnessez,” “Con Queso” and “Con Carne” are absolutely stellar tracks, the fact that they have been previously released and/or have been available on the internet for the better part of the past year and a half surely takes much away from the album.

On the flipside, this is, after all, the work of rap’s most quotable artist, whose mastery of double entendres, witty one-liners, dry irony and stark humour remains, in my honest opinion, unparalleled. After having done both Vaudeville Villain projects with Sound:Ink and Insomniac, as well as the Madvillain project with Madlib, “MM..Food?” is effectively the first largely self-produced Doom solo project since — hell — “Operation: Doomsday” (King Geedorah being a M.I.C. project). Save for “One Beer,” a predictably murky, grime-soaked Madlib contribution, “Potholderz” (Count Bass D) and Kon Queso (the always dependable PNS of The Molemen), this album is littered with Doom’s irreverent, bizarre production. “Beef Rapp” is a monumental, dirgey exercise in rumbling bass, “Hoe Cakes” slathers kitschy keys over a beatboxed rhythm while “Frendz” sounds like an 80’s sitcom theme song. Liberal samples betray Doom’s overwhelming affinity for comic books and obscure Marvel movie spinoffs, something that is entirely unsurprising coming from a man who has at various points in his career named his alter ego Viktor Vaughn.

In truth, reviewing a Doom album is always a confounding prospect. More than any other artist in recent history (save for perhaps Kool Keith), there truly is no grey area when it comes to the Metal Face – his deadpan, sometimes off-time delivery will most certainly evoke a guttural, extreme reaction. While I can say with absolute honesty that I was smitten with Zev Love X and MF Doom upon first exposure, I certainly acknowledge the validity of criticisms that have followed Mr Dumile his entire career. Doom makes absolutely no conceivable attempt to adhere to preconceived templates of what a rapper should sound like- there are few shades of nuance or variation in his droning, coarse delivery, and his gravely sandpapered voice places little emphasis on emotion or raw conviction. Often, his flow may appear choppy or even clumsy, sloppily fumbling and spilling over the thumping drums and outrageous sampled loops that fuel his tracks.

Cue Nin, the hot-blooded Doom fanatic. At the expense of receiving a surge of hate mail, I whole-heartedly urge you to overlook your initial impressions of Doom’s work (unless of course you are as infatuated with him as I am). Examine each line individually, and you might come upon the stunning revelation that Doom is among the most inventive and imaginative lyricists of our time. A pop culture enthusiast’s wet dream, Doom’s work injects the flagging corpse of punchline rap with a welcome jolt of finesse. “You do it for the smelly hubbies/ Shorties know what time it is like it’s time for Teletubbies,” “Can’t take the street out the person, looking for beef, it could worsen into heat burstin’,” “If I had a dime for every rapper that bust guns, I’d have a mill for my son in trust funds,” “Plead the fifth, he sips the wine stiffly/ Patiently comes up, gets spiffy in a jiffy/ Gift for the grind, criminal mind, shifty/ Swift with the nine through a 5950,” “He said his gun clap, nigga ran after just one slap” are a few choice nuggets in Doom’s inexhaustible supply of instant vintage quotables. Elsewhere, Doom makes reference to Sally Struthers, the Smothers Brothers, Tears For Fears, Sodom & Gomorrah, the tower of Pisa, BB King and DB Cooper. Doing one better than Masta Ace and his thematic masterpiece “Soda & Soap,” Doom flips the Sesame Street theme song into a twisted tales littered with biscuit references on “Kookies.” While I accept that Doom’s somewhat unenthused, callously straightfaced delivery may serve to obscure it, his wit and deliciously dry, jet black humour exudes a charm that is unmistakably his own.

Now a major gripe- what on earth is with the three skits and one instrumental that Doom wedged between (the quite brilliant) “Deep Fried Frenz” and “Kon Karne”? This has been a source of much indignation amongst Doom faithful on the internet of late, and rightfully so, the successive skits merely serve to ruin any sense of cohesion in the album, particularly considering the superb quality of the two tracks that lay on either side of this lengthy diversion.

There are few characters in rap today quite as eccentric or unrepentantly individual as MF Doom. The last dude that adopted multiple personas and crafted unapologetically unique music, Kool Keith, has faded into obscurity and irrelevance, unable to maintain the creative momentum generated with the Dr Octagon project. While the self-indulgence of Doom’s work is inarguable, his ability to simultaneously subvert preconceived notions about rap music (transforming rap songs into 2 minute, almost punk rock excursions, stripped of hooks and traditional rap time signatures on Madvillainy) and create great music that is unquestionably intelligent, but never condescending or alienating/overtly obtuse. On this record, he traverses the well-trodden avenues of gun and drug rap, reinterpreting redundant rhetoric into remarkable displays of comic genius, all while sticking firmly to a food motif. In many ways, this could very well be the most accessible work Doom has done to date, and you would be very well advised to experience the phenomenon of Doom for yourself. I am willing to wager that he will either be the best, or the worst rapper you’ve never heard, a risk that I feel is absolutely worth taking.