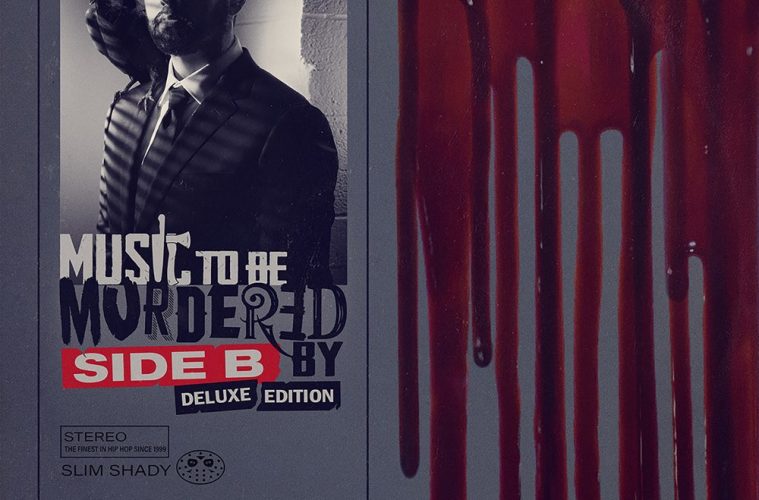 Eminem :: Music To Be Murdered By – Side B

Alfred Hitchcock is widely acknowledged as a legendary movie director. The so-called Master of Suspense had a compelling presence off-camera as much as he did behind one. His films like Rear Window, Vertigo and North by Northwest are some of my personal favourites and he was never afraid to challenge his audience, his cast or himself. Students of the craft continue to study his work almost a century after his career began and you feel emcees will do the same when they look back on Eminem.

The Detroit artist’s decision to revisit his “Music to be Murdered By” album with a semi-sequel titled “Side – B” is as interesting as it is redundant. It sees Marshall adopting his Hitchcock theme a second time, despite the first time never really succeeding. Hitchcock-Em can’t really be added to the gallery of Eminem-isms because, unlike Slim Shady, Marshall Mathers or Eminem, the whole concept never gets off the ground. You get a brief introduction from Alfred stating this is music to be buried to – which isn’t even the album’s title – and then the whole concept is thrown out the window. Eminem can write suspense and thrillers: “Stan” proves this but psychological horror and paranoia have been prevalent themes throughout Em’s career. Last year’s “Darkness” was a risk but good use of a far-reaching voice. Em excels at controversy but he too often spoils it with childish dick jokes. This is a theme throughout “Side B” – he puts the cock in Hitchcock. And if that made you imagine Marshall parking his pork sword inside Alfred then this is probably the album for you!

In that regard, Eminem channels Russ Meyer rather than Alfred Hitchcock. You’ve got your standard puerility, attempts at shock-value and an advanced level of lyricism, but let’s start with the good stuff. “Tone Deaf” is masterfully rhymed and not overdone, featuring some great one-liners. “We put out fire and Dre stamps it” is the type of line another emcee would spend two bars on – yet it’s merely throwaway material here. Eminem is the perfect artist for the lyric video format as, amongst all the immature humour, Em scatters nuggets throughout.

There are a couple of satisfying Eminem/Dr. Dre collaborations. “Guns Blazing” shows traces of their great chemistry from yesteryear and the Sly Pyper hook is irresistible, although Dre’s usual immaculate delivery sounds oddly weary – Dr. Dre has always had one of the most enjoyable voices in music, but this guest appearance has him sounding old and less precise than usual. “She Loves Me” is similarly a decent effort although I personally find Eminem’s attempt at affection often lacks authenticity.

“Higher” is an enjoyable example of modern Eminem, benefitting from a solid structure and classy hook, let down by a slew of hollow rhymes. The video is full of MMA sponsorship and it would sit well on a gym playlist but Em’s scrawny build and Just For Men aesthetic is a visual that barely convinces when viewed alongside LL Cool J’s iconic “Mama Said Knock You Out” (clearly the inspiration here) – it’s not quite as defiantly chest-thumping as it thinks it is.

The rest of “Side B” is equally mixed with some moments simply lacking the right features. “Book of Rhymes” ends up being the antithesis of the memorable Nas song. The DJ Premier feature is largely wasted, confined to a scratched outro, all the more frustrating considering the beat is entirely forgettable. Ty Dolla Sign joins Em on “Favorite Bitch”, a catchy if scatty duet that merges modern R&B imagery with murderous lyrics and it lacks chemistry. Lead single “Gnat” was too weird for my liking; coronavirus conspiracies and restrained jabs at politicians that even includes an apology to the hypersensitive. Em, is that you?

“I’ll P on your head like a Philly’s hat”

“If you shot a tree you wouldn’t pop the trunk”

“Got your stomach in knots like you swallowed a rope”

The dreaded forced wordplay rears its head on “Alfred’s Theme”, which loses its way halfway through thanks to reams of terrible ideas too obvious for most. I’m not going to gloss over the embarrassing shots at Mariah Carey on “These Demons” either, which has evolved from mild ribbing into needlessly juvenility. “Killer” is decent but ultimately too upbeat and “pop-py” for its content, with verses that were delivered with intense energy you can only imagine Em bathed in coffee before he jumped in the booth. And whoever thought “The Key Skit” was a good idea needs to be dropkicked off a pier.

I know some of our readers enjoy the wrestling references. Eminem is the type of wrestling you see on NXT. It’s technically impressive and undoubtedly the result of years of hard work – not many people can do it. But it’s often just a bunch of moves, which is what listening to Eminem can feel like. Firing off complex rhyme schemes and punchlines one after the other, but with little pay-off for the listener. Eminem is an acrobat, albeit a freakishly talented one. He’s 48 years old and rapping like a 28-year-old and that’s to be applauded, not necessarily lauded. And that’s the key difference – with each subsequent album Eminem strays from the “great complete rapper list” (let’s say your Jay-Zs and Royce Da 5’9’’s…) into the “will spit fire but doesn’t necessarily make great records list” (Papoose, Canibus…). Is that a bad thing? Not really, but it does start to explain the divisiveness of his recent career amongst hardcore rap fans and seeing his technical ability bloom often to the detriment of his artistic output.

“You either die a hero, or you live long enough to see yourself become the villain” is oddly apt and Em needs to be careful he doesn’t become the villain (in this case Hitchcock’s Psycho) he so often portrays in his raps.