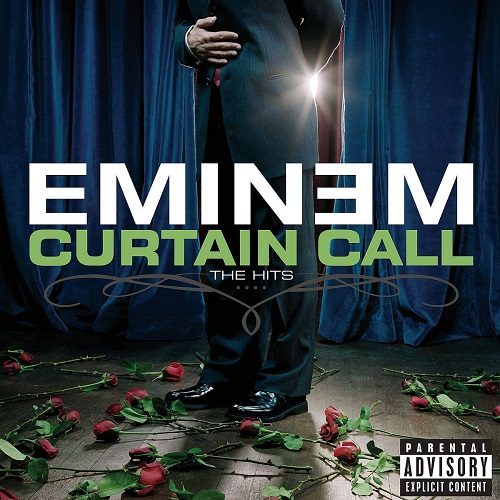 Let’s be real – the only reason anybody will buy this album is because there are three new Eminem songs: “Fack,” “Shake That” and “When I’m Gone.” A smarter reviewer would have just bought those three songs off of iTunes and called it a day, but like a well-trained music industry tool I shelled out good money for a completely unnecessary album. Anyone who has bought every Eminem album since day one already has all the songs on “Curtain Call – The Hits.” And realistically who hasn’t? Someone who got into Eminem late probably went back to get the earlier shit. Someone who was into Eminem from the earliest days probably stuck with him right up until now. If this album really is the swan song that Marshall Mathers is hinting it will be, Eminem will go down as one of the best selling artists of all time, and at the very least best selling during his active tenure as an MC.

So are the new songs worth buying individually OR as part of this album? If you’re the kind of die-hard Eminem fan described above, either from day one or converted along the way, there’s no question it is. The self-produced “Fack” is heavy on the bass, light on drums, and full of the irreverant fun that has often made Em public enemy number one. It’s certainly no coincidence that he often sounds like a screaming Eric Cartman during the song – South Park and Eminem have drawn a lot of inspiration from each other over the years. There’s nothing particularly innovative about “Shake That,” but the fact it sounds like a leftover track from “Encore” and that Nate Dogg sings “I get more ass than a toilet seat” on the cut will probably be enough for most people. As for the album’s lead single “When I’m Gone?”

“Have you ever loved someone so much, you’d give an arm for?
Not the expression, no, literally give an arm for?
When they know they’re your heart
And you know you were their armor
And you will destroy anyone who would try to harm ’em
But what happens when karma, turns right around and bites you?
And everything you stand for, turns on you, despite you?
What happens when you become the main source of a pain?
“Daddy look what I made”, Dad’s gotta go catch a plane
“Daddy where’s Mommy? I can’t find Mommy where is she?”
I don’t know go play Hailie, baby, your Daddy’s busy
Daddy’s writing this song, this song ain’t gonna write itself
I’ll give you one underdog then you gotta swing by yourself
Then turn right around on that song and tell her you love her
And put hands on her mother, who’s a spitting image of her
That’s Slim Shady, yeah baby, Slim Shady’s crazy
Shady made me, but tonight Shady’s rocka-by-baby”

The song reads as an apology to his daughter for not always being there when he was out selling millions of records and appearing on TRL, and for what it’s worth Eminem seems to be entirely sincere and on the level about it. When talking about his family he usually is, perhaps with the exception of the original “Just the Two of Us” way back at the beginning of his career. That song was so hilariously wrong it made Eminem an instant star to me, but lately and particularly with “Encore” Em has been on this very serious “I’m a responsible adult now, I can’t say this shit any more, I don’t want to start more rap wars” tip. It just doesn’t suit him. Perhaps it really is time to hang it up and become a full-time movie actor instead, because the mantle of rap responsibility seems too heavy for him to bear any more. “Curtain Call – The Hits” is his swan song – all of the number one songs (not to be confused with all of his BEST songs) and a few new tracks thrown in for good measure. Ladies and gentlemen, Slim Shady has left the building.