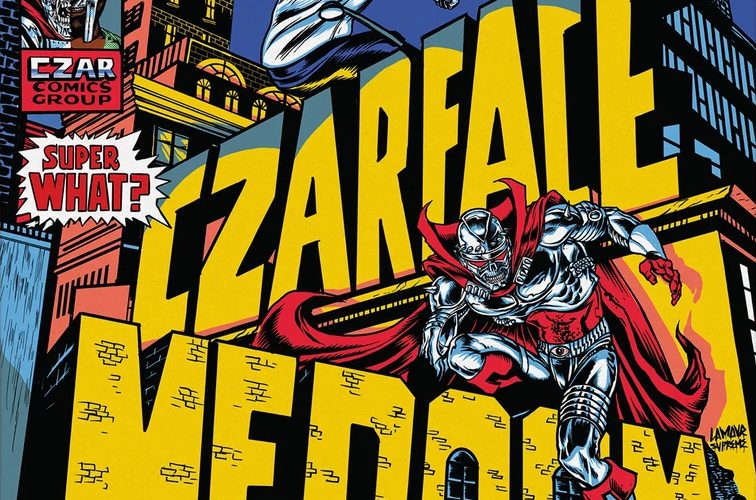 An unexpected release, “Super What?” is both the follow-up to the 2018 joint Czarface/MF DOOM collaborative album “Czarface Meets Metal Face” as well as the first posthumous release of any MF DOOM material. Stated to have been completed during the summer of 2020, the album doesn’t stray far from its predecessor, having the same producers and the usual raps: Polysyllabic punchline-laden battle rhymes with pop culture references ranging from very obscure to über-popular, especially and particularly in regards to comic books. Consisting of 10 tracks, the album is divided in halves with the first four tracks being the DOOM side while the remainder are the CZAR side, even though all three emcees appear on each other’s halves interchangeably. The Czar-Keys (7L & Spada4) don’t switch up their formula here, incorporating many vocal samples from television, cartoons, and crafting their beats from obscure lo-fi material.

This reviewer is an avid fan of both comic books and hip-hop, so it made perfect sense to me when Czarface and DOOM hooked-up in 2018. As with their collaborative debut, it was the Czar who overpowered the Metal Face. No disrespect to the dead, but DOOM maintained a lazy, garbled delivery to his flow from 2008 onward and it shows in this posthumous release. His rhymes are never in question, but lyrically, the Czarface/DOOM albums belong to Inspectah Deck & Esoteric. The album begins with “The King and Eye” featuring Darryl “D.M.C.” McDaniels, in which Eso drops the heaviest load lyrically over some thumping drums. On “Czarwyn’s Theory of People Getting Loose”, Deck gets it started, then DOOM gives several back-to-back internal non-sequitur rhymes, but Esoteric goes last and has the longest verse. “Mando Calrissian” has a jazzy taste to the lyrics and does not contain many “Star Wars” references despite the title. “DOOM Unto Others” is the first time on the album where all three emcees’ come together and have chemistry over the dark menace of the beat, giving some display to their audio comic book personas:

Del tha Funkee Homosapien makes an appearance on “Jason and the Czargonauts” and has the last verse over the boom-bap production. The title is interesting as it references the 1963 film “Jason and the Argonauts”, which involved the titular protagonist fighting a three-headed dragon, which connects to DOOM’s King Geedorah persona. “Break in the Action” starts off with a verse from DOOM, and the sampling in the production had me thinking that it was one of his own beats that just didn’t make the cut on any of his “Special Herbs” releases. More than halfway through the album, “A Name to the Face” begins and is a self-referential interlude containing samples culled from various sources. If you think of this album in terms of a comic book, then “A Name to the Face” is a self-promotional advertisement in between the pages. This appropriately segues into “This Is Canon Now”, which is entirely focused on Esoteric himself lyrically engaging in criminal acts utilizing Marvel Comics characters and references as metaphors for his tendencies:

The album closes off with “So Strange”, which is simply trash-talking rhymes from DOOM and Eso. Lastly is “Young World”, Czarface’s modern take on the Slick Rick classic without resembling the original, musically or lyrically. “Super What?” is what expected from this collaboration and while I enjoy the crossing of the cultures of comic books and hip-hop, I’m not biased for it. That said, the album’s sole difference from its predecessor is the length. It’s not lyrically mind-blowing, but its hip-hop for fans in the know and those tired of the vapid mainstream.