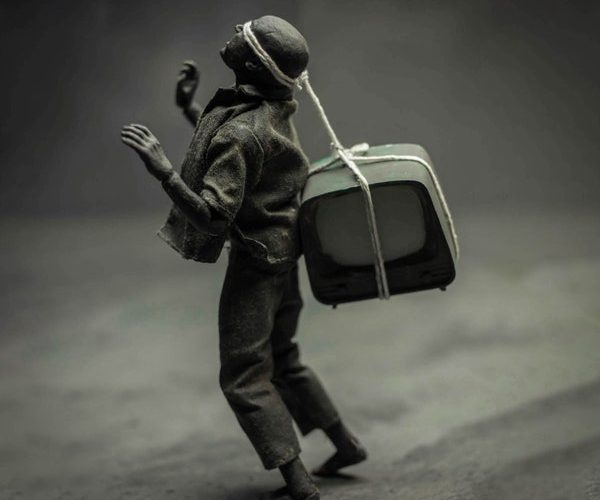 Th1rt3en :: A Magnificent Day For An Exorcism

Pharoahe Monch is one of the best rappers in the history of music. That’s just a fact. He has flirted with the mainstream success such a reputation should garner, perhaps best known for his 1999 hit single “Simon Says”, but it’s his stellar catalog of albums that solidify his status. He can seamlessly move from tongue-twisting rhyme schemes to melodic hooks without ever feeling like he’s trying too hard to impress the listener (*cough* Eminem *cough*). Basically, he’s highly respected and this very site has waxed lyrical over his lyrics on wax countless times. His four solo albums have garnered a 9/10, 9/10, 8.5/10, and a 9/10. And that’s not even considering the 10/10 and 9/10 for the first two Organized Konfusion albums. One day we will see who has the highest average score but my money would definitely be on Pharoahe.

So what the heck is a Th1rt3en when it’s at home? Well, this is Pharoahe Monch working with a guitarist (Marcus Machado) and a drummer (Daru Jones) and while it’s not got Pharoahe shouting into the microphone like the aesthetic of their videos, logo and even the name of the band suggest, it’s easy to see why fans haven’t warmed to this record.

Rap fans are a fickle bunch you see. Many hardcore fans just listen to rap and have a disdain for pop, rock, or anything that isn’t a traditional “beat”. This album isn’t for them and it’s clear from the lukewarm reception I’ve seen from many Monch fans that this album didn’t really deliver. Music publications often sneer at the very idea of rapping over electric guitars and immediately label any attempt as either ill-judged or akin to a midlife crisis. Some of these criticisms are fair, but Pharoahe has always been rapping to electric guitars. 2001’s “Got You/Fuck You” from the Oscar-winning film Training Day is a notable example that worked brilliantly. Even the brilliant “Agent Orange” was some glitched electronica with a drum loop that he was singing on. “Broken Again” is bass licks and some pretty decent crooning. Basically, my point is Pharoahe Monch forming a band shouldn’t come as a surprise and it’s pretty brave considering his flawless thirty-year career.

The single “Cult 45”, which starts the record, flirts with the wordplay you’d expect from Pharoahe Monch as he considers the cult-like following Donald Trump has (and him being the 45th president of the United States). Colt 45 is also the name of a gun and it’s clear Trump is just as dangerous as America’s relationship with the handgun. While this does date the album in a post-Trump world – it’s an important reminder that Trump wasn’t a four-year fever dream that will be forgotten – it fanned the flames of a fire that’s been burning for centuries.

Horror tropes and satanist symbolism appear throughout but they feel like an unnecessary aesthetic that distracts from the art. Pharoahe Monch has always had a political edge running through his songs but combined with stereotypical metal aesthetics, some of it comes across more try-hard than it would if it was just Pharoahe Monch spitting these lyrics over your traditional hip hop beats.

“Goats Head” has that classic Pharoahe rhyming but the guitar melody isn’t as rewarding as it could be. “Triskaidekaphobia” succeeds in that regard as it dials down on the guitars, but it’s a fun trip through an emcee’s interest in superstition with examples of fan service – perhaps knowing hardcore Pharoahe Monch fans might not be so keen on this album. The nod to an Eminem rhyme scheme and a ballsy admission that Pharoahe never went solo and it is in fact a different person to the guy in Organized Konfusion. I love that shit.

I suspect a live performance of songs like “Kill ‘Em All Again” go down well, and having experienced Pharoahe in concert twice, he’s certainly in the top tier of live rap performers. But as a track to bump on your headphones, the “beats” here largely suffer from just being underwhelming backdrops. Comparing it to classic Rage Against the Machine is obviously unfair, but having delivered a constant stream of modern classics himself, it certainly feels like if Pharoahe had more distinct riffs, the songs would have a lot more replay value.

It’s no surprise the highlight of the album is “Oxygen”, a Marco Polo assist that sticks to a strong melody and crisp snare drums. I’d love to hear a full Pharoahe/Marco project one day as their chemistry is clear (see also “Same Shit Different Toilet”, “The Fight Song”, “The Jungle”).

This isn’t some epiphanic revelation but I have a theory as to why a hybrid of rap and rock never really succeeds. The continual aspect of rapping clashes with the continual notes from the electric guitar. A beat stops and starts and provides a template for the rhymes; simple beats allow technical lyrics to flourish. As soon as you have a busy beat with busy rapping you’re veering into information overload. Th1rt3en’s best moments are where they lean more towards the traditional hip hop structure, replacing a sample or loop with electric guitars. As soon as the music breaks away from that format, it’s less successful. Alternately, a song like “Racist” works because it shows both sides of that coin.

If anyone knows how to successfully combine rap with rock, it’s Cypress Hill. Their appearance on “Fight” highlights this as B-Real keeps it simple with a short 4-bar jab at police and then joins in on the chant of a hook. It’s unclear whether Sen Dog is there and I don’t think Muggs is, so calling it a full Cypress Hill feature could be viewed as a marketing tactic to attract Cypress Hill fans. The track itself is one of few to accurately capture the feeling around the world (but more specifically in the United States) of the systemic racism experienced at the hands of police. It’s angry but the scary masks and violent imagery aren’t the true horrors at work, it’s the fact a political system has normalized the killing of black men and women without punishment. The video is a useful reminder to any morons claiming “All Lives Matter” too, with the visual of a woman appearing to throw a petrol bomb at the family of a white policeman, but it’s actually aimed at the racist institutions creating these monsters (represented by the KKK).

Th1rt3en is a tough project to review as a fan of Pharoahe Monch. After three decades of hot lava, this record just feels a bit undercooked and particularly when placed alongside 2014’s “P.T.S.D.” and 2011’s “W.A.R.”, “A Magnificent Day for an Exorcism” isn’t in the same league. The bars are still impressive and it’s refreshing to hear a high-profile emcee tackling racism and politics in an educated manner, whilst still capturing the anger and fear that comes with a year couped up in lockdown. Pharoahe utilizes his voice better than any rapper I can think of. But it’s difficult not to feel disappointed by “A Magnificent Day for an Exorcism”. It’s a strange type of disappointment though. Pharoahe Monch has earned the right to experiment and try something different. I wouldn’t be averse to another Th1rt3en album. I just think if it’s to be as memorable as his previous releases, some tweaks to the instrumentals are all that’s really needed. The fact remains, Pharoahe Monch is one of the best rappers in the history of music.