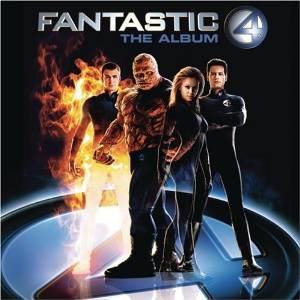 Just to set the record straight from the start, there are 20 tracks and over an hour of music on the “Fantastic 4” soundtrack, and only five of them could be considered hip-hop. Ironically that’s just one-fourth of the Fantastic 4. If one were parcelling out the members of the superhero team by genre, this review would be Ben Grimm a.k.a. “The Thing.” He’s big, he’s strong, he looks tough on the outside but on the inside he can be pretty deep. So while as a closet rock and metal fan this reviewr appreciates the contributions of artists like Alter Bridge and Velvet Revolver, they’re not really going to be covered in this write-up. Instead we’ll speak upon whether or not this soundtrack would be worth your time as a hip-hop fan for what’s included, especially since you’d be making a pretty steep investment proportionally compared to the rest of what’s on this disc.

The first track you’ll come across is Chingy’s “Relax.” On this song he’s rapping to a beat by Kwame ‘K1 Mil’ that’s pretty much par for the course Chingy has steered thus far – a little bit jiggy and a little bit St. Louis. To his credit this is not a throwaway track – judging by the lyrics Chingy wrote this song specifically with the movie in mind and does come off with some pretty good lines:

“All the ladies say I make it hot, call me Johnny Storm
And I stay on furr, I ain’t never lukewarm
Flame up (up) I’m hurr to tell ya get your game up
The good prevail, so how can the city blame us?
They say I got a gift, and no it’s not a myth
Get out of line, The Thing’ll knock you off a cliff”

While Chingy always has and probably always will sound like a knockoff version of Nelly, it’s still nice to see him come correct on this track. Next up out the block is the powerful collaboration of Miri Ben-Ari on the violin and Pharoahe Monch on the lyrics, rocking the “New World Symphony.” This one is your money in the bank if you decide to purchase the album, because with her soulful playing, Kanye West’s beat and Monch’s powerful oratorical skills it’s truly some next level shit:

“The master speaks masterfully what he has mastered
Four flaws to change, new laws are forecasted
It’s bigger than the Dirty South but bi-coastal
It’s global, war and the weapons we choose are Pro Tools
Rap moguls get – slapped with vocals
Until they learn this colloquialism we goin postal
It’s what I am supposed to do, is oppose you
Revolution’ll stop the thinkin that’s old school (woo!)
Let me assist you like Malone from Stockton
I’m in the cockpit, cocked back and locked in”

Now how many rappers you know are going to spit the word “colloquialism” in a flow? If you can’t give Monch his props after over a decade of spitting raps like that dating back to the Organized days, you’re straight up hating. Unfortunately there’s not much to say about the third inclusion here, since you should already know and be familiar with Lloyd Banks’ song “On Fire.” The temptation to use the song in a movie featuring the Human Torch was just too great to resist, but it would have been more refreshing to have him do something original like Chingy and Monch. Fourth out the box is a newcomer named Miss Eighty 6 with a song titled “Now You Know”:

“Been all around the world on a party campaign
Still New York City got the wildest game
Girls rock thug diva with they attitude
Lookin so sexy when they actin rude
And these dudes – come in all different flavors
Like, all the discs in my CD changer
Hear a little game daddy spit, you don’t want it
Fast forward to the next hit, and jump on it”

You can’t really hate on her ability to flow or the thumping beat by Ali Dee, it’s just that lyrically her vocal tone and verbiage really doesn’t do much to distinguish her from Lil’ Kim and Foxy Brown. If anything she sounds like the two were fused in a transporter pod accident a la “The Fly.” To call the last track hip-hop may be a little bit of a stretch, but then again this is from a movie featuring a man made of rubber named Mr. Fantastic. Orange Range provides a track called “Kirikirimai (Fantastic Four Remix)” which starts out scratched and sampled and then gets into chunky guitar sounds and beats more reminiscent of Linkin Park. Then again to some people Linkin Park is hip-hop, so maybe that’s not so much of a stretch after all. The DJ keeps coming back in with cuts and slices throughout, which keeps the hip-hop vibe going until the end of this rather noisy track.

Unfortunately the sum total of this review must be that if you were buying it for the one-fourth that’s hip-hop, you’d probably be wasting your money. The Lloyd Banks song is recycled, the Chingy track is decent, Miss Eighty 6 is definitely hit or miss and Orange Range is only marginally hip-hop by virtue of turntablism. The Miri Ben-Ari and Pharoahe Monch collaboration is fantastic, but for all the money you’d spend it’s a decision where you may hope to find it for sale individually via one of the MP3 retail fronts online. “Fantastic 4” is a good experience as a film and if you’re in to all the different genres contained with in, but viewed just as a hip-hop experience it’s like Richard Reed stretched too thin – it just can’t hold the weight.