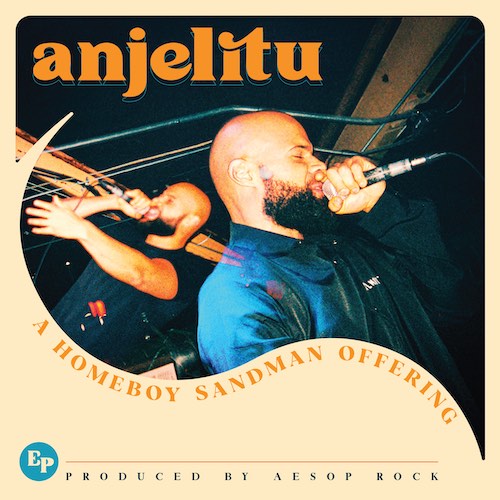 “Keep that matter under mind
I will not be undermined
Write this down then underline
I GO HARD.” – Homeboy Sandman

To quote from fellow writer Patrick Taylor, “It’s great to see an artist continue to improve this deep into his career.” Homeboy Sandman started dropping music for the masses 14 years ago, and his commitment to creative growth over that span is impressive. Let me put that into perspective for you by bringing up Kevin Durant — in that exact same time span KD has won two NBA championships, three Olympic gold medals, and more individual awards than I could possibly list in one paragraph. How does he do it? Simple — he never rests on his laurels or assumes there’s nothing left to accomplish. Both men have a commitment to “Go Hard” each and every day. Sandman’s wit is also unblemished by age: “Gather ’round the campfire/B-Team, love to see a plan backfire.”

It doesn’t hurt Sandman at all that the entirety of “Anjelitu” is produced by Aesop Rock, an artist with an even longer tenure in hip-hop music whose entire career can be summed up by “I do what the fuck I want and people just happen to like it.” It makes the two as perfectly met as the MC Ricky D sample that frames the verses of “No Beef,” and long time heads can already hear it in their heads long before clicking play on this clip.

“Some men feel like eating beef is manly/Doing things because you think they’re manly, isn’t very manly.” You may or may not agree with Sandman’s vegetarian philosophy (and I’m not about to stop eating meat — no offense brother) but he’s definitely in the ballpark when he says you shouldn’t do things just to prove who or what you are to other people.

This short album is the embodiment of that ideal musically, and closing on “Lice Team Baby” hammers that point home by having Aesop Rock step from behind the boards to reunite their “Triple Fat Lice” tag team. There will undoubtedly be skeptics who say that “Anjelitu” is a pretentious exercise in self-masturbation that exists only to please the artist and the producer. You know what happens when people make music only to please themselves though? More often than not they make damn good music. How would you make yourself happy making something shitty? This definitely isn’t that, and I prefer artists who shoot so high they are labelled pretentious over those who shoot so low they hit their own foot.