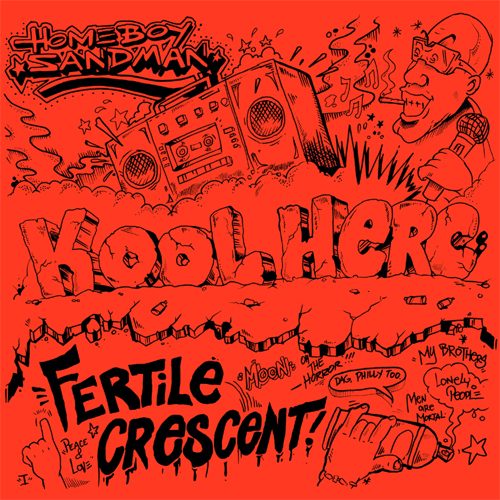 This EP marks the first in a series of proposed projects where Homeboy Sandman works exclusively with one producer. The Aztext did the same thing for their “Who Cares If We’re Dope?” series, to good results. It’s nice to have the cohesion of a rapper working with a single producer, and the EP format ensures that the idea doesn’t get worked into the ground. For this installment, Homeboy Sandman is working with producer El RTNC, who has produced for Mos Def and De La Soul as Rthentic. The concept of the album is paying homage to OG DJ Kool Herc, the man who almost single-handedly invented hip-hop with his South Bronx block parties in the 1970s.

If you’ve never heard Homeboy Sandman, his style is a bit of an acquired taste. His rhymes oscillate between simple and complicated, with a lot of wordplay, inner rhymes, and commentary on the state of hip-hop. Given his positive message and playful rhymes, Homeboy Sandman can come off as corny at times. I was really excited about Homeboy Sandman’s 2010 album “The Good Sun,” but have grown less interested in his subsequent output, to the extent that I didn’t even bother picking up last year’s “First of A Living Breed.” It’s not that I don’t like the guy, but I found myself skipping his tracks whenever they came up on shuffle. I was intrigued enough by the title and concept of this EP to give the man another shot, and I’m glad I did.

Homeboy Sandman has found a great partner in El RTNC. His beats have a hard but playful funkiness that counters Homeboy’s often monochrome delivery, and inspires the rapper to be loose with his rhymes. For this EP, El RTNC is sampling 70s funk, rock, and pop records, laying down heavy drums for Homeboy Sandman to do his thing.

They start off with “My Brothers,” a call for unity with Homeboy spitting fast and furious over a cowbell and bass. “Oh, The Horror” has Homeboy rapping over what sounds like a Fela Kuti instrumental, lamenting the preconceptions people have about him because he is a rapper:

“Don’t come to me about buying bud just because I rhyme, brah
Or find blood
Or fine print
Wondering which one’s my click just because I spit
I wish you
Wouldn’t assume that I was a goon
Because of my rap tunes
Or that I pack tools
Or that I act the fool
Or that I left school
Or that my section is a cesspool
And I hate homosexuals”

Homeboy Sandman’s rhymes are often dense and multi-layered, with internal rhymes, puns, and references that are easy to miss. He even mixes in a tongue twister into his verse on “Men Are Mortals”:

“I been the infamous since drinking Infamil
Whomever wants to cause an incident I be like “It’s a deal”
I’m not interested in spending an instant with the infidels
Can tell I used to read Fidel and rock Big L
My city’s like the citadel, my fears were quelled the day ceiling fell
My bros and sisters such are sitting ducks and that’s not sitting well
I sit and dwell and build an instrument for infinite to guarantee the simpletons go impotent
I always gave one hundred ten percent, I smell like heaven scent I’m known as heaven sent
Ain’t down for wasting time, I never made a dime I haven’t spent, I have respect
I always find the time to work my tris and pecs
I cash my checks for packs of pickled peppers Peter Piper picked”

It’s possible to get so distracted by Homeboy’s cleverness that you forget that he is rapping about serious issues. He’s challenging the state of rap music and the self-destructive lifestyle that hip-hop often promotes, he’s rapping about falling in love with a woman who has been damaged by abuse, he’s questioning the presence of ego in music, and he’s calling for peace and love. He does this all in a way that is never preachy, often with so much verbal acrobatics that you only realize what he is rapping about after the fifth or sixth listen. It’s almost Aesop Rock syndrome, rhymes so intricate that you need Cliff’s Notes just to understand what is going on. It’s miles away from the simple call-and-response rhymes that the MCs who rapped with DJ Kool Herc were spitting back in the day. While El RTNC seems to have been inspired to make old-school beats, Homeboy Sandman is paying homage spiritually rather than stylistically to Kool Herc. He’s pondering the state of hip-hop, imagining that it could go in a different and more positive direction, and trying to get back to the innocence of those early block parties.

“Kool Herc: Fertile Crescent” succeeds because it manages to balance Homeboy Sandman’s unique delivery with fun, free-wheeling production. El RTNC insures that the only thing heavy about this EP are the beats, and Homeboy Sandman proves that strong ideas can be wrapped in clever wordplay, and you don’t need to drop f-bombs to make an impact.