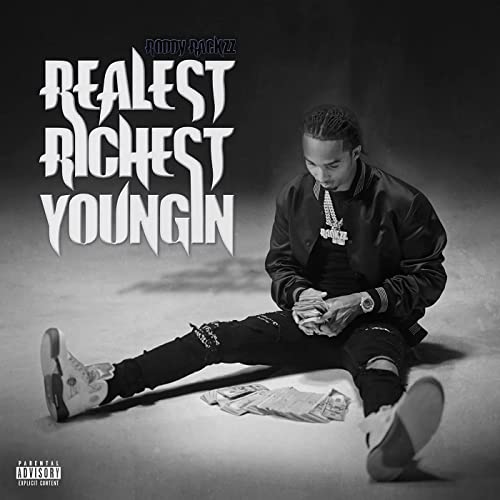 Mr. Rackzz is a Los Angeles by way of Baltimore transplant who landed a deal with Def Jam faster than he landed on Cali soil. That connection allowed the “Realest Richest Youngin” to drop a single ahead of his new album called “Head Up” tailor made for coronavirus-esque viral spread. His “wrists are on flood,” he’s doing tricks on a dirt bike in the desert, and for some reason he’s on a palatial ranch estate full of homies and horses (or maybe the horses are homies too). You don’t forget it once you see it and the sing-song delivery sounds like its being spit over a Tracy Chapman instrumental — softly strummed guitar and all.

I applaud someone for making a catchy single and an eye-popping video, and Roddy Rackzz has done both thanks to producers Deeboy & JishBeatz and director Whipalo. The question now is “Where does Mr. Rackzz go from here?” Collaborations — that’s where. Rackzz’ album features cameo appearances from Lil Rekk, OTR Chaz (multiple times) and even DipSet alumni Jim Jones on “Thru the Night.” While Chaz seems like someone both Rackzz and Def Jam are trying to put on, the Jones collab’ was a surprise.

While doing my due diligence for “Realest Richest Youngin” I also discovered a Roddy Rackzz single predating the album almost a full year ago called “Never Enough.” 2020 was a wild year though so I’m not mad this one slipped through the crackzz, and like “Head Up” it’s got that catchy radio friendly sound that has undoubtedly blown Rackzz up quickly. It shows Rackzz celebrating his success by throwing money and spraying champagne in the air, hanging out at a very designer pool you’re meant to assume is his own Hollywood Hills hangout, and enjoying the good life.

If you hadn’t already noticed a theme to “RRY” it’s time to break it down for you. Roddy Rackzz likes money — he likes making it, he likes spending it, and he’s never got enough of it. Like the late Christopher Wallace the mo’ money he has, the mo’ problems he’s got. I recently had a hours long phone conversation with an old friend who said that growing up poor he could understand why so many rappers flaunt when they achieve success — you want to prove to the world that you exceeded expectations and that it’s possible for anybody in poverty to do the same. The statistics might say otherwise but conspicuous consumption is a way to sell people on the dream whether it’s a Wall Street stock broker with a Benz or a famous rapper with a Bentley. Either way you flaunt it because it’s fun to do.

There’s another old saying that goes with “mo’ money mo’ problems” and it’s “scared money don’t make none.” The theory is if you put your wealth out into the world, it’s going to come right back to you, and if you keep a level head about it “money don’t change you, it just shows you who realer.” It’s a nice theory, but if it was true then there wouldn’t be so many stories of artists going bankrupt, going to jail for tax evasion, or not really owning all the homes and cars they show off (they rent it or the record label owns it). Maybe some people who spend it all make it all back because they garner more fans and have sold out tours, but that’s like hitting the lottery twice.

It’s going to sound like I’m dogging Roddy Rackzz for not planning for his future, but in truth I enjoyed “Realest Richest Youngin” and I don’t knock Rackzz for celebrating the fact he made it to Def Jam, one of the oldest and most venerated imprints in hip hop music. The album is inoffensive and he’s far from the first Def Jam rapper to floss. Anybody remember EPMD saying “Martini & Rossi, Asti Spumante?” Yeah they went from begging people to listen to their demos to having it all, and then breaking up over who had more of it all, then reuniting years later. Rackzz may have those kind of problems too now that he has money. He may lose friends over it. He may even lose it all. It’s his to invest, flaunt, or sit on though either way. You do you youngin. I hope it lasts for you and this isn’t the last for you.